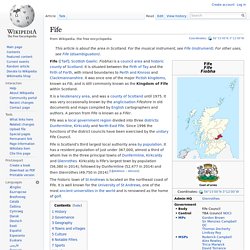 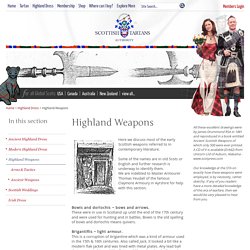 Some of the names are in old Scots or English and further research is underway to identify them. We are indebted to Master Armourer Thomas Yeudall of the famous Claymore Armoury in Ayrshire for help with this section. Bowis and dorlochis ~ bows and arrows. Crail. Coordinates: Crail ( listen ); Scottish Gaelic: Cathair Aile) is a former royal burgh in the East Neuk of Fife, Scotland. 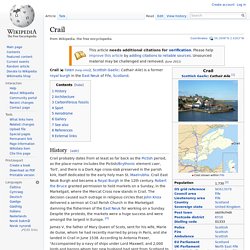 History[edit] James V, the father of Mary Queen of Scots, sent for his wife, Marie de Guise, whom he had recently married by proxy in Paris, and she landed in Crail in June 1538. According to Antonia Fraser, "Accompanied by a navy of ships under Lord Maxwell, and 2,000 lords and barons whom her new husband had sent from Scotland to fetch her away, Queen Mary landed at Crail in Fife on 10 June 1538, just over a year since the landing of Queen Madeleine. Whoohoo.co.uk - Scottish Translator! Welcome to the whoohoo.co.uk Scottie Translator! 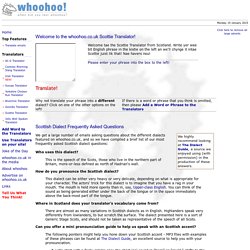 Scottish Dialect Frequently Asked Questions We get a large number of emails asking questions about the different dialects featured on whoohoo.co.uk, and so we have compiled a brief list of our most frequently asked Scottish dialect questions: Who uses this dialect? Dictionary of the Scots Language. English-Scottish Gaelic Dictionary, Glosbe. Welcome to the English-Scottish Gaelic dictionary. 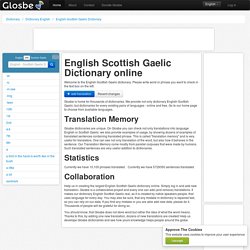 Please write word or phrase you want to check in the text box on the left. add translation Glosbe is home for thousands of dictionaries. We provide not only dictionary English-Scottish Gaelic, but dictionaries for every existing pairs of languages - online and free. Go to our home page to choose from available languages. Visit the Highlands of Scotland - accommodation activities attractions and events. The Highlands. Scotland Travel: Your Scotland Guide for Things to Do, Hotels, Dining, Shopping, Events & more. Scotland.org. Scotland's national tourism organisation. Scotland. Scottish. Scottish people. This article is about the Scottish people as an ethnic group. 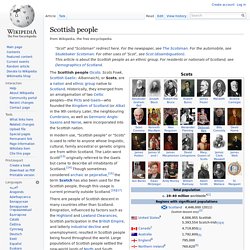 English-Scottish Gaelic Dictionary, Glosbe. Whoohoo.co.uk - Scottish Translator! Dictionary of the Scots Language. 50 Spectacular Places to See in Scotland (PHOTOS) On September 18, Scotland will vote whether or not to end the 307-year-old union with the rest of the United Kingdom. 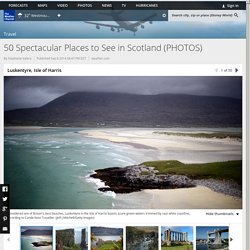 But while voters decide whether they want the nation to become an independent country, they—and the millions of visitors who visit Scotland per year—are all probably in agreement that its historic castles, stunning lochs and numerous natural wonders make it one of the most beautiful places in the world. Scotland is known for its iconic castles, some towering as majestic landmarks, others standing in mysterious ruins.

But with 6,800 miles of coastline, hundreds of islands, mountains, canals, rivers and lochs, Scotland’s landscape and distinct geography make it a popular destination for outdoor activities. With so many attractions, it's no wonder that travel guide Lonely Planet named it as one of the top destinations for 2014. (MORE: 50 Incredible Island Escapes) 30 images of Scotland we can't stop looking at. IF YOU’VE NEVER LOOKED AT a topographical map of Scotland, I’d encourage you to do so now. 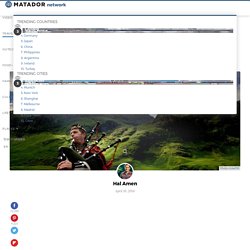 The northern third of the island of Great Britain is one unique place, covered in glacially carved mountain chains and freshwater lakes, cut by sea inlets, and claiming almost 800 islands in its territory. When it came time to source photography for this post, my only problem was deciding which ones to cut to get down to 30 — it’s a beautiful country. And along with that natural beauty, you have the Scots themselves. Few peoples have been as successful at exporting their cultural emblems around the world — could you name, for instance, an article of clothing or musical instrument that screams “Austria!” National Geographic. The Hodgson Clan Website. The Border Clans and their Emigration to America The Border Clans England and Scotland became one kingdom in 1603. 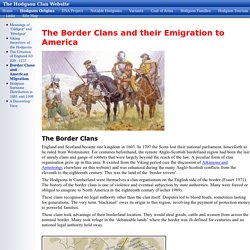 In 1707 the Scots lost their national parliament, henceforth to be ruled from Westminster. Border Reivers. Border Reivers were raiders along the Anglo–Scottish border from the late 13th century to the beginning of the 17th century. 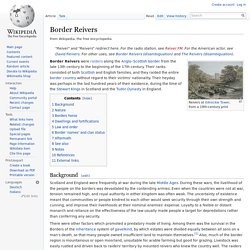 Their ranks consisted of both Scottish and English families, and they raided the entire border country without regard to their victims' nationality. Anglo-Scottish border. Scottish Borders. Topographic map of Scottish Borders and Lothian The Scottish Borders (Scots: The Mairches) is one of 32 council areas of Scotland.[1] It shares borders with council areas, the City of Edinburgh, Dumfries and Galloway, East Lothian, Midlothian, South Lanarkshire and West Lothian. It is bordered to the south and east by the non-metropolitan counties of Cumbria and Northumberland in England.

The administrative centre of the area is Newtown St. Boswells. Scottish Lowlands. The Lowlands (Scots: the Lallans or the Lawlands; Scottish Gaelic: a' Ghalldachd, "the place of the foreigner") are a cultural and historic region of Scotland. The Lowlands is not an official geographical or administrative area of the country. There are two main topographic regions- the Midland Valley (or Central Lowlands) and the Southern Uplands.