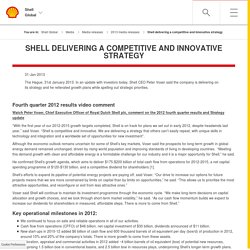 “Shell is competitive and innovative. We are delivering a strategy that others can’t easily repeat, with unique skills in technology and integration and a worldwide set of opportunities for new investment”. Although the economic outlook remains uncertain for some of Shell’s key markets, Voser said the prospects for long-term growth in global energy demand remained unchanged, driven by rising world population and improving standards of living in developing countries.

Shell’s efforts to expand its pipeline of potential energy projects are paying off, said Voser. Voser said Shell will continue to maintain its investment programme through the economic cycle. Shell Global. Market basics. Shell-lpg-study-english-summary. IT Centre Bangalore - India. About Us In March 2015, Shell announced the creation of an in-house global information technology centre in Bangalore, India, which is expected to provide employment opportunities for several thousand IT professionals by 2020. 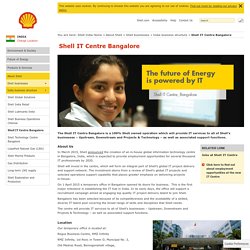 Shell will invest in the centre, which will form an integral part of Shell’s global IT project delivery and support network. The investment stems from a review of Shell’s global IT projects and selected operations support capability that places greater emphasis on delivering projects in-house. On 1 April 2015 a temporary office in Bangalore opened its doors for business. This is the first major milestone in establishing the IT hub in India. Bangalore has been selected because of its competitiveness and the availability of a skilled, diverse IT talent pool covering the broad range of skills and disciplines that Shell needs. 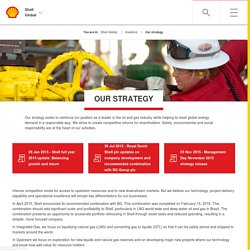 But we believe our technology, project-delivery capability and operational excellence will remain key differentiators for our businesses. In April 2015, Shell announced its recommended combination with BG. This combination was completed on February 15, 2016. This combination should add significant scale and profitability to Shell, particularly in LNG world-wide and deep water oil and gas in Brazil. The combination presents an opportunity to accelerate portfolio refocusing in Shell through asset sales and reduced spending, resulting in a simpler, more focused company.

In Integrated Gas, we focus on liquefying natural gas (LNG) and converting gas to liquids (GTL) so that it can be safely stored and shipped to markets around the world. In Downstream, we focus on turning crude oil into a range of refined products, which are moved and marketed around the world for domestic, industrial and transport use. Mahesha_ranasoma. Significance of air humidity and air velocity for fungal spore release into the air. 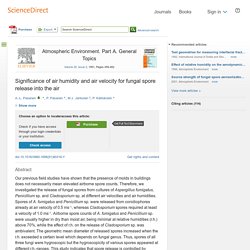 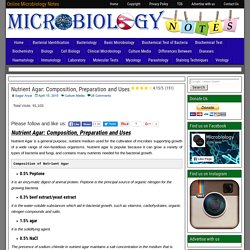 Nutrient agar is popular because it can grow a variety of types of bacteria and fungi, and contains many nutrients needed for the bacterial growth. Composition of Nutrient Agar 0.5% Peptone It is an enzymatic digest of animal protein. 0.3% beef extract/yeast extract It is the water-soluble substances which aid in bacterial growth, such as vitamins, carbohydrates, organic nitrogen compounds and salts. 1.5% agar It is the solidifying agent. Mycology - Habitats - Fungi in Air. Introduction Spores of fungi are commonly dispersed in wind. 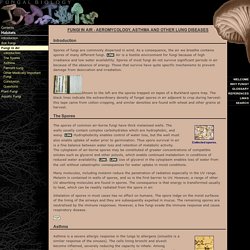 As a consequence, the air we breathe contains spores of many different fungi. LINK Air is a hostile environment for fungi because of high irradiance and low water availability. Spores of most fungi do not survive significant periods in air because of the absence of energy. Those that survive have quite specific mechanisms to prevent damage from desiccation and irradiation. Shown to the left are the spores trapped on tapes of a Burkhard spore trap. The Spores.

Microbe Census Reveals Air Crawling with Bacteria. The air is a hostile place for a microbe. 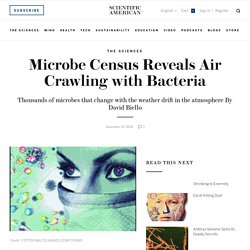 Often dry, lacking in nutrients and filled with deadly ultraviolet radiation, the atmosphere would seem to be the last place a microbe would want to find itself. Yet, a new genetic census of some air samples from Austin and San Antonio, Tex., finds that as many as 2,000 different kinds of microbes may be present in the air we breathe on any given day. Microbial ecologist Gary Andersen of Lawrence Berkeley National Laboratory and his colleagues collected air samples in the two Texas cities over a period of 17 weeks, starting in 2003.