Polls May Be Underestimating Evan McMullin’s Chances In Utah. Explicit cookie consent. GARY JOHNSON, the presidential nominee of the Libertarians, and Jill Stein, his counterpart for the Greens, are idealists. 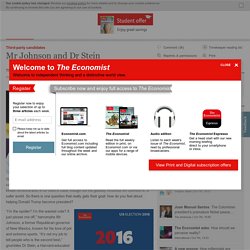 Both believe they are fighting for a better politics, a kinder America and, in Dr Stein’s case, though not the globally incurious Mr Johnson’s, a safer world. So there is one question that really gets their goat: how do you feel about helping Donald Trump become president? “I’m the spoiler? I’m the wasted vote? It just pisses me off,” harrumphs Mr Johnson, a former Republican governor of New Mexico, known for his love of pot and extreme sports. If the main purpose of a presidential election is to push unorthodox ideas and build space for new movements, their irritation is fully justified. In a normal year, that tally would be expected to collapse as the election nears; in 2012 Mr Johnson and Dr Stein, running against Barack Obama and Mitt Romney, together won less than 1.5% of the vote. 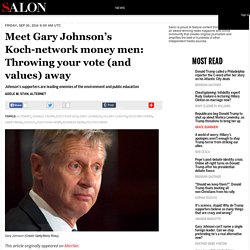 Gary Johnson, the Libertarian Party presidential candidate, is currently having a moment with younger voters. Gary Johnson – The POLITICO 50: Ideas changing politics and the people behind them. Gary Johnson isn’t going to be the next president. 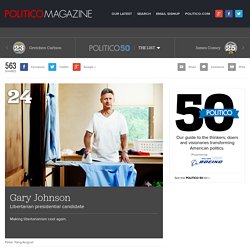 But he is proving to be a one-man makeover for the Libertarian Party, which had long been lacking for someone groovier than the Koch brothers to energize its socially liberal, pro-marijuana, next-generation brand of fiscal conservatism. Does America need to be “made great again”? No, America is great today. But government needs to get out of the way of allowing that greatness to manifest itself in prosperity, equality of opportunity and respect on the international stage. Third parties aren't 'spoilers'. They're at the cutting edge of democracy. NBC News recently projected that Hillary Clinton has surpassed the 270 electoral college votes she needs to be elected president. 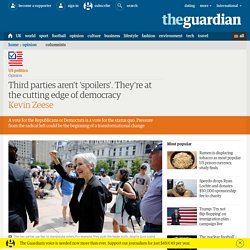 Based on polls, which have been surprisingly accurate this year, Politico reports that if you include states where Clinton leads by 5%, she has 302 electoral college votes. There may be no swing states in 2016. Indeed, no one with her lead at this stage of the campaign has lost the popular vote in 16 elections, since modern polling began. The legacy of 2016: Trumpism, broken politics and third-party futility. The establishment will likely see it as an opportunity to reassert its dominance in the wake of a Trump defeat but Trump voters may have something to say about that. 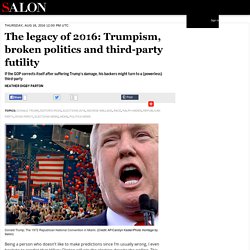 However much the DC insiders love that dreamy Paul Ryan he gets booed at Trump rallies. He is enemy No. 3 (after Hillary and Obama) in the conservative movement press. Mitch McConnell doesn’t fare much better. The establishment may have a harder time picking up the pieces than they realize. So what happens if they don’t? Third-party presidential candidates fight for 15% in polls – and a spot in debates. The former Republican, marijuana-smoking, Everest mountaineering ex-governor of New Mexico and presidential nominee of the Libertarian party has a problem: he’s barred from the presidential debates. 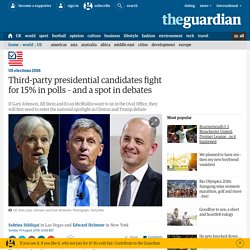 To appear on stage with Hillary Clinton and Donald Trump this autumn, Gary Johnson needs to boost his national polling numbers to 15% from around 8% now. Without that national exposure, and the blockbuster ratings the three scheduled Clinton-Trump dust-ups are likely to produce, it’s hard for anyone to see how Johnson, 63, or either of two other minor-party candidates, the Green party’s Jill Stein or even Evan McMullin, a 40-year-old former CIA counterterrorism officer, could ever become more than mere electoral curiosities.

But the emergence of three independent candidates, during a year of record dissatisfaction with the major party candidates, may still make for an unpredictable twist to the story. Green Party Sees Opportunity Amid Wide Voter Discontent. Clinton's third-party headache. A raft of new polls out this week carried almost unanimously good news for Hillary Clinton, staking the Democratic presidential nominee to significant leads over Donald Trump. 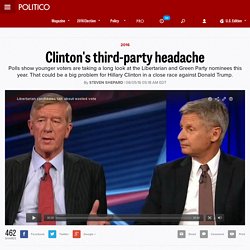 But there’s one potential warning sign in these polls should the race narrow: Clinton’s lead over Trump shrinks when voters are allowed to choose one of the major third-party candidates in the race. Yet the Libertarian Party’s presidential ticket — composed of former GOP Gov. Gary Johnson of New Mexico and former GOP Gov. Bill Weld of Massachusetts — appears to draw more from voters who might otherwise be aligned with Clinton, especially younger voters. Defecting Democrats, Trump and bitterness: Why Jill Stein just might turn November upside down.

We’re in something of a lull in the news cycle now, with primaries over and the convention a month away. 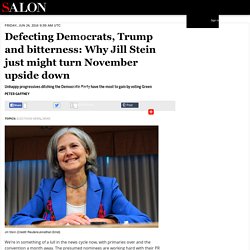 The presumed nominees are working hard with their PR teams to decide where they want the narrative to take us next. But there’s an unauthorized narrative that is quickly taking shape online: rumblings of defection from the Democratic Party, a surge in registration for the Green Party, and a serious bid come November by Green Party nominee Jill Stein. Is it true? Think You’ve Got It Locked, Hillary? Meet Jill Stein. After an anxiety-inducing and divisive primary, Democrats are starting to breathe easier. 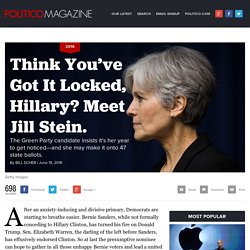 Bernie Sanders, while not formally conceding to Hillary Clinton, has turned his fire on Donald Trump. Sen. Elizabeth Warren, the darling of the left before Sanders, has effusively endorsed Clinton. So at last the presumptive nominee can hope to gather in all those unhappy Bernie voters and lead a united Democratic Party in the fall, right? 2016 Election: Can #Nevertrump become #Yeslibertarian? Paul Jost is a serious Republican. 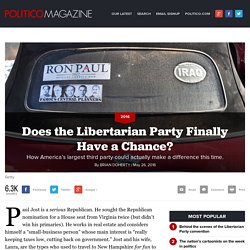 He sought the Republican nomination for a House seat from Virginia twice (but didn’t win his primaries). He works in real estate and considers himself a “small-business person” whose main interest is “really keeping taxes low, cutting back on government.” Gary Johnson wins Libertarian presidential nomination. Former Republican governor from New Mexico and Libertarian presidential candidate Gary Johnson threw his hat in the ring during a convention in Orlando where he slammed his Republican and Democratic rivals. (Reuters) ORLANDO — Former New Mexico governor Gary Johnson won the Libertarian Party’s presidential nomination on Sunday, fending off five rivals from different factions on two closely fought ballots and securing more than 55.8 percent of the total vote.

“I will work as hard as I can to represent everyone in this room,” Johnson said after his victory. Explicit cookie consent. Explicit cookie consent. The Prohibition Party Still Exists–And Is On the Ballot In At Least 3 States. Gene Amondson, a recent Prohibition Party presidential candidate, wielding a chainsaw in homage to radical temperance pioneer Carrie Nation. Bernie Sanders’ Senate colleagues stunned by his ascent - Manu Raju and Burgess Everett.