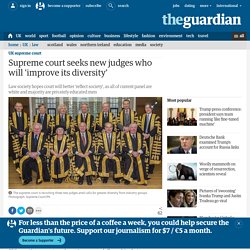 Of the court’s 11 current members, 10 are men and all are white. Just two were not privately educated. On Thursday, the court’s president Lord Neuberger said he and his colleagues want that to change. Attacks on judges undermine law - Supreme Court president. The president of the UK's Supreme Court has criticised politicians for not doing enough to defend judges following a row over the Brexit legal challenge. 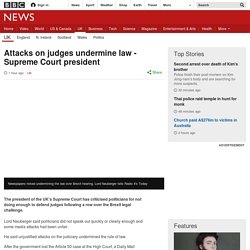 Lord Neuberger said politicians did not speak out quickly or clearly enough and some media attacks had been unfair. The 11 Supreme Court judges who could rule on UK's Brexit appeal. Image copyright Supreme Court The government is to appeal against the High Court's ruling that Article 50 cannot be invoked without Parliament's support, so that means the case will now be heard in the Supreme Court, the highest in the land, in December. 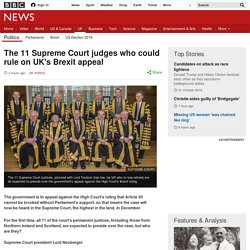 For the first time, all 11 of the court's permanent justices, including those from Northern Ireland and Scotland, are expected to preside over the case, but who are they? Supreme Court president Lord Neuberger Image copyright PA Lord Neuberger, 68, is the president of the Supreme Court, a position he has held since 2012, and is the UK's most senior judge. After studying chemistry at Oxford University he worked at the merchant bank N M Rothschild & Sons from 1970-1973 until he was called to the Bar in 1974. In 2013 he voiced fears about legal aid cuts, telling the BBC they could lead people to "take the law into their own hands". He has two sons and one daughter. 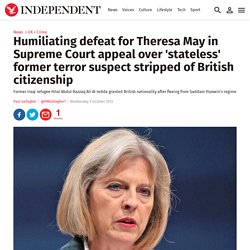 The decision paves the way for Hilal Abdul Razzaq Ali Al-Jedda, who was once held as a terrorist suspect, to return to the UK from Turkey where he currently lives with his family. In a humiliating verdict the five justices said that if Mrs May’s had paid more attention to her own guidance she would have realised the “fallacy” of her appeal. Jonathan Sumption: the brain of Britain. In October 2012, Jonathan Sumption QC argued his last case as a barrister. 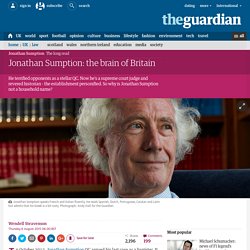 It was a big one; in terms of fees (undisclosed, but probably north of £5m) the biggest of his career. He had deferred his appointment to the supreme court in order to see it through. Sumption was representing the billionaire oligarch Roman Abramovich against his nemesis the billionaire oligarch Boris Berezovsky. He had cleared his desk and spent months studying the murky nexus of politics and business in Russia in the 1990s. This was the backdrop to Berezovky’s claim that Abramovich owed him several billion pounds as a result of a deal they brokered together to take over a giant slice of Russia’s oil industry.

On day four of the trial, Sumption began his cross-examination of Berezovsky. Sumption’s first question was: “In 1995, what was your opinion about political corruption?” Sumption’s second on the case, Helen Davies QC, watched with accustomed admiration. Sumption speaks French and Italian fluently. Judiciary is making progress on diversity, says lord chief justice. Significant progress is being made towards a more diverse judiciary, according to the lord chief justice, who has declared: “We are on the road to delivery.” 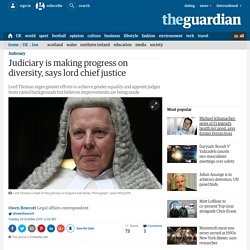 In a speech that may be read as a rebuke to those warning it could take 50 years to achieve gender equality on the bench, Lord Thomas of Cwmgiedd said that appointing judges who reflect the variety of backgrounds in British society is vital for preserving public confidence in justice. His comments follow statements made last month by Jonathan Sumption, one of 11 men on the 12-person UK supreme court, who suggested it could take half a century to achieve equality within the senior judiciary. Lady Hale: supreme court should be ashamed if diversity does not improve. The UK’s supreme court should be “ashamed” if it does not radically improve its diversity in the next round of judicial appointments, according to its only female judge, Lady Hale. 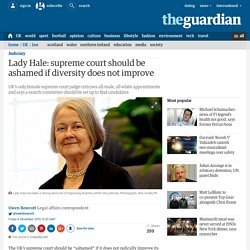 Over the past decade all justices selected to sit on the UK’s highest court have been male, white and predominantly privately educated, she told an audience at Birmingham University on Friday. Hale’s forthright speech may be read as a deliberate rebuke to remarks from her fellow supreme court justice Lord Sumption, who claimed that any attempt to speed up the process of achieving gender equality in the senior judiciary could lead to “appalling consequences”. His suggestion that it may take 50 years to achieve gender equality in the senior judiciary prompted a furore within the legal profession and allegations of sexism. Hale, 70, is the only woman on the 12-strong supreme court bench. Fifteen people have been sworn in as law lords or supreme court justices since then, she said.

Jonathan Sumption: the brain of Britain.