GOP SuperPACs didn’t give Trump money, but they did help create his juggernaut campaign. Since the introduction of SuperPACs as a campaign tool in 2010 following the Citizens United Supreme Court decision, there has been increasing concern over the role of outside money in US political contests. 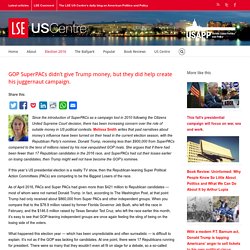 Melissa Smith writes that past narratives about money’s influence have been turned on their head in the current election season, with the Republican Party’s nominee, Donald Trump, receiving less than $900,000 from SuperPACs compared to the tens of millions raised by his now vanquished GOP rivals. She argues that if there had been fewer than 17 Republican candidates in the 2016 race, and SuperPACs had cut their losses earlier on losing candidates, then Trump might well not have become the GOP’s nominee. If this year’s US presidential election is a reality TV show, then the Republican-leaning Super Political Action Committees (PACs) are competing to be the Biggest Losers of the race. And there was plenty of money to go around. Credit: Truthout.org (Flickr, CC-BY-NC-SA-2.0) Melissa M.

The new Gilded Age: Close to half of all super-PAC money comes from 50 donors. Why Bernie Sanders Has Super PACs. Bernie Sanders hates big money in politics. 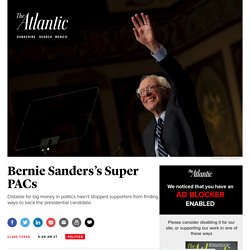 Sanders has long insisted he won’t rely on super PACs in his bid to win the White House. Ibtimes. Next week, a documentary about the “remarkable life” of Carly Fiorina will premiere in early primary states. 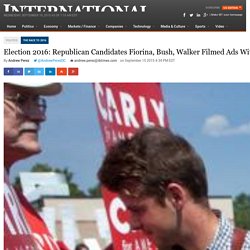 A promotional video for the “Citizen Carly” movie promises a defense of Fiorina’s business record, as well as personal details shared directly by the Republican presidential candidate herself. On film, Fiorina describes receiving her cancer diagnosis: “You have cancer. We have to begin tests immediately.” She talks about her marriage and how she found herself "on the back of a motorcycle" with the man who is now her husband. The former CEO of Hewlett-Packard, who started her career as a secretary, tells the camera: "I know what it feels like to be at the bottom of the totem pole. " The final frame of the video offers a surprising disclosure: The documentary, it says, was “not coordinated with any candidate. " Federal Election Commission rules, adopted after the U.S.

There are enormous benefits to this approach. Candidates have, of course, searched for ways around those rules. Another Way to Mask Super Rich Donors - Bloomberg Politics. In January, Ted Cruz’s quest for the presidency got help from a limited liability company called V3 231. 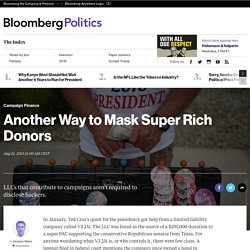 The LLC was listed as the source of a $250,000 donation to a super PAC supporting the conservative Republican senator from Texas. For anyone wondering what V3 231 is, or who controls it, there were few clues. A lawsuit filed in federal court mentions the company once owned a hotel in Brooklyn, N.Y. The Top 2012 Republican Donors Who’ve Already Taken a Side in 2016 - NationalJournal.com. Some of the Republican Party's largest donors from the last presidential election are already picking their candidates for the next one. 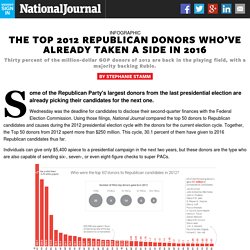 Wednesday was the deadline for candidates to disclose their second-quarter finances with the Federal Election Commission. Using those filings, National Journal compared the top 50 donors to Republican candidates and causes during the 2012 presidential election cycle with the donors for the current election cycle. Together, the Top 50 donors from 2012 spent more than $250 million. This cycle, 30.1 percent of them have given to 2016 Republican candidates thus far. Individuals can give only $5,400 apiece to a presidential campaign in the next two years, but these donors are the type who are also capable of sending six-, seven-, or even eight-figure checks to super PACs.

The filing deadline for super PACs isn't until the end of July, but we can already see where some top donors might send their money this year. Andrew McGill contributed to this article. QUIZ: Can you tell the difference between a super PAC ad and a candidate’s ad? If you're Jeb Bush, the great thing about Right to Rise PAC raising more than $100 million is that all of that money will be used for one thing: getting you elected president. 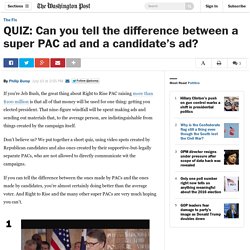 That nine-figure windfall will be spent making ads and sending out materials that, to the average person, are indistinguishable from things created by the campaign itself. Don't believe us? We put together a short quiz, using video spots created by Republican candidates and also ones created by their supportive-but-legally separate PACs, who are not allowed to directly communicate wit the campaigns. If you can tell the difference between the ones made by PACs and the ones made by candidates, you're almost certainly doing better than the average voter. And Right to Rise and the many other super PACs are very much hoping you can't.

"Raised in a church in rural Paint Creek, Texas, Rick Perry learned life's important values. "Get ready, America, for the biggest brawl for liberty of the century. Fiorina: "Like Mrs.