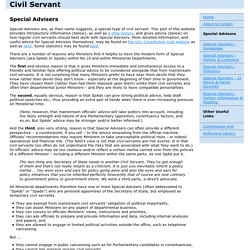 This part of this website provides introductory information (below), as well as a little history, and gives advice (below) on how regular civil servants should best work with Special Advisers. More detailed information, and useful advice for Special Advisers themselves, may be found on the UCL Constitution Unit website as well as here. Some statistics may be found here. There are a number of reasons why Ministers find it helpful to have the modern form of Special Advisers (aka SpAds or Spads) within No.10 and within Ministerial Departments. The first and obvious reason is that it gives Ministers immediate and simultaneous access to a friendly and familiar face offering political advice to be considered alongside that from mainstream civil servants.

The Rise Of The Spad: How Many Ministers Or Shadow Ministers Have Had Proper Jobs? Much has been made this week of John Major's comments on the dominance of the upper echelons of power in Britain by the privately educated and affluent middle classes. 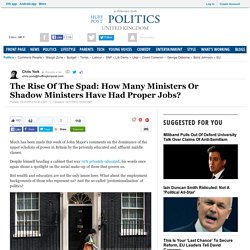 Despite himself heading a cabinet that was 70% privately educated, his words once again shone a spotlight on the social make-up of those that govern us. But wealth and education are not the only issues here. InsideOut%20SPAD%20The%20Unelected%20Lynchpin. Government SpAds: Special Advisers in the news. David Cameron's vast army of unelected spinners and Spads threatens British democracy. We are very fortunate in Britain in having an objective and impartial civil service. 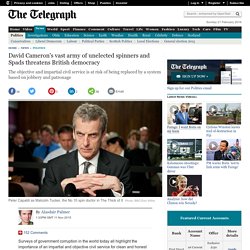 Of course, it is not perfect: its officials can be overcautious, resistant to change, and unable to see beyond rigid adherence to tedious rules of procedure. But it is very much better than the alternative that it replaced: government through political patronage. Since the implementation of reforms in second half of the 19th century, British civil servants have had a culture of honesty and integrity, of providing impartial and objective policy advice, and of telling elected politicians when their proposals are unworkable, illegal or unethical.

That culture is under threat. It is being eroded in a typically British way. It is frequently inferred that because those numbers are minuscule compared to the thousands who work in the Civil Service, they don't matter. Special Advisers. UK Extended Ministerial Offices: on the road to cabinetisation Tuesday, 09 February 2016 In 2015 the Conservative government has approved the creation of five Extended Ministerial Offices (EMOs), enabling ministers to recruit more special advisers and temporary civil servants. 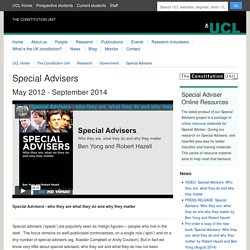 This development, which has gone unreported by the media, was unearthed by Athanassios Gouglas. Special advice: What's it really like being a spad? "What we need is something that the public want, is incredibly popular and is free.” 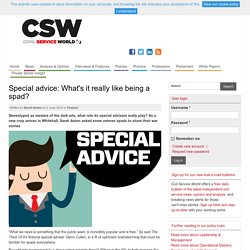 So said The Thick Of It’s fictional special adviser Glenn Cullen, in a fit of optimistic brainstorming that must be familiar for spads everywhere. Brought into government by Labour prime minister Harold Wilson in the 60s to help manage the “burden of modern government”, spads have seen their roles and remits expand hugely in recent years. When they’re not providing political advice on policy or managing the press, these mercurial creatures are also expected to work with other departments and with Number 10. And, despite a coalition promise in 2010 to “put a limit on the number on special advisers”, their ranks have continued to swell. As of November 2014 there were over 100 special advisers working across government. What should spads expect? Conflicting priorities "The biggest underlying challenge comes from the fact that departmental spads are pulled in three ways. To feel overwhelmed No social life. Attack of the clones: how spads took over British politics.

When I was a wet-behind-the-ears political aide in the early 2000s, the summit of British politics felt marginally more open and, well, democratic. 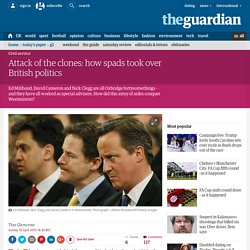 Though Tony Blair was a product of Scottish public school and Oxford, his immediate predecessor as prime minister, John Major, grew up in Brixton and left school at 16. Blair’s deputy – now Baron Prescott of Kingston upon Hull – began professional life as a ship’s steward. The leader of the opposition, Iain Duncan Smith, was a former soldier. Fast-forward to 2015, and a looming election in which the three main party leaders are drawn from a narrow cadre of Oxbridge fortysomethings. Perhaps most significantly, David Cameron, Nick Clegg and Ed Miliband – like other leading Westminster figures of their generation, including the chancellor and shadow chancellor – all share a past as special advisers. How did they take over British politics, this clone army of spads? Ministers reflect: on special advisers. The overall number of special advisers (spads) in government is 92, down from 107 just before the May election. 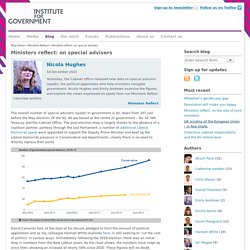 Of the 92, 40 are based at the centre of government – No 10, HM Treasury and the Cabinet Office. The post-election drop is largely thanks to the absence of a coalition partner; partway through the last Parliament, a number of additional Liberal Democrat spads were appointed to support the Deputy Prime Minister and beef up the Liberal Democrat presence in Conservative-led departments; clearly there is no need to directly replace their posts. David Cameron had, at the start of his tenure, pledged to limit the amount of political appointees and as my colleague Hannah White explores here, is still seeking to ‘cut the cost of politics’ in various ways. Immediately following the 2010 election, there was an initial drop in numbers from the New Labour years.

As the chart shows, the numbers have crept up since then, showing an increase of nearly 50% since 2010. George Osborne: Chancellor has four times the usual number of special advisers. George Osborne, the Chancellor, has been accused of building a power base at the Treasury to support his ambition to succeed David Cameron as Prime Minister. 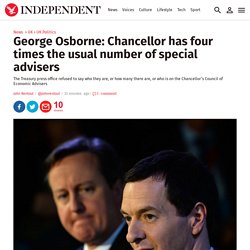 The annual list of special advisers, to be published this month, is expected to confirm that he employs eight special advisers – political appointees paid from public funds. The normal limit for a cabinet minister is two, but Mr Osborne has been given permission by Mr Cameron to hire an extra six.