Worst. President. Ever. As my 25th wedding anniversary approached, I tried to be creative in buying gifts for my wife. 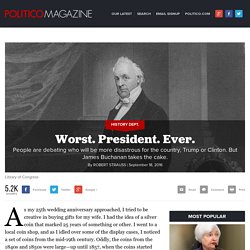 I had the idea of a silver coin that marked 25 years of something or other. I went to a local coin shop, and as I idled over some of the display cases, I noticed a set of coins from the mid-19th century. Oddly, the coins from the 1840s and 1850s were large—up until 1857, when the coins started becoming, at best, half the size of the others. The President and Congressional Persuasion. How the President and Congress work together can be difficult for students to give examples for as it is so often sometime that takes place behind closed doors. 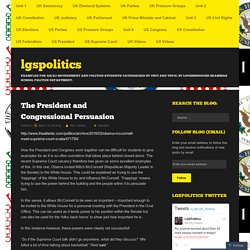 The recent Supreme Court vacancy therefore has given us some excellent examples of this. In this one, Obama invited Mitch McConnell (Republican Majority Leader in the Senate) to the White House.

Obama. Meet the man who can basically read President Obama’s mind. Brian Mosteller, special assistant to President Obama and director of Oval Office operations, in front of the White House. 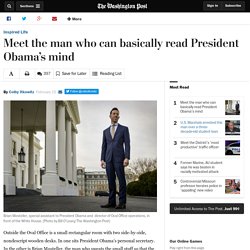 (Photo by Bill O’Leary/The Washington Post) Outside the Oval Office is a small rectangular room with two side-by-side, nondescript wooden desks. In one sits President Obama’s personal secretary. How seven years of Obama created Trump. I had seen Obama at the primaries, and at the Democrat Convention. 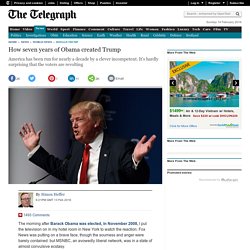 I had waited for him to speak intelligently and practically about the state of America and how he would put it right, but I waited in vain. The cliché at the time, which became more relevant later, was about how he campaigned in poetry but would govern in prose. How much power does the President actually have? This is an outstanding op-ed piece that is full of links, examples and exam-fodder for students looking at this long-answer essay – just how much power does the President have? 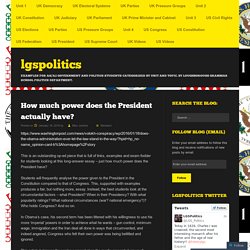 Students will frequently analyse the power given to the President in the Constitution compared to that of Congress. This, supported with examples produces a fair, but nothing more, essay. Instead, the best students look at the circumstantial factors – what President? When in their Presidency? Has Obama really changed America? President Barack Obama reacts while talking about Newtown and other mass killings during an event held to announce new gun control measures at the White House in Washington January 5, 2016. 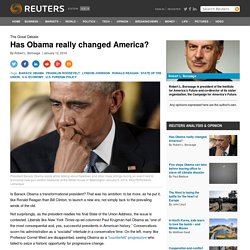 REUTERS/Kevin Lamarque Is Barack Obama a transformational president? That was his ambition: to be more, as he put it, like Ronald Reagan than Bill Clinton, to launch a new era, not simply tack to the prevailing winds of the old. Not surprisingly, as the president readies his final State of the Union Address, the issue is contested. Liberals like New York Times op-ed columnist Paul Krugman hail Obama as “one of the most consequential and, yes, successful presidents in American history.”

Guantanamo and the Federal Bureaucracy. Delay of closure – White House Exec Order 2009 – “The Obama administration has decided to hold off on releasing a plan to close the U.S. military prison at Guantánamo Bay.” 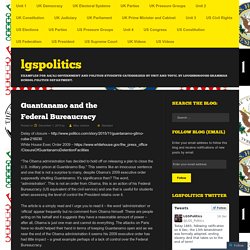 This seems like an innocuous sentence and one that is not a surprise to many, despite Obama’s 2009 executive order supposedly shutting Guantanamo. It’s significance then? The word, “administration”. This is not an order from Obama, this is an action of his Federal Bureaucracy (US equivalent of the civil service) and one that is useful for students when assessing the level of control the President retains over it. EXOP. JFK: declassified documents reveal a cunning and cagey president. John F Kennedy’s secret talks with Soviet intelligence, surreptitious tape recordings and “girlfriend system” create a new portrait of a cunning and cagey JFK, according to a historian who has researched a treasure trove of recently released recordings and papers of the late president. 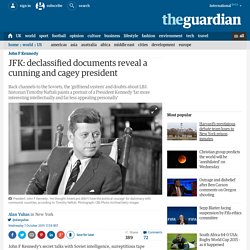 Drawing on documents and tape recordings recently declassified, historian Timothy Naftali told a meeting at New York University on Tuesday night that Kennedy’s wife Jacqueline and brother Robert censored and edited the president’s legacy, cultivating the “mystique” of a charismatic leader who continues to baffle and fascinate Americans of all stripes and creeds. Conservatives, liberals, conspiracy theorists and people who write “what if” histories fight over him. Fans of Bernie Sanders compare their candidate to him. A Fox News pundit wrote a children’s book about him. More than 25 years ago, author Don DeLillo addressed JFK mania indirectly and concluded: “Facts are lonely things.” A Federal Bureaucracy that ‘looks like America’? Obama has made headlines recently by appointing the first openly gay man to head the military branch, a branch that until recently did not allow gays and lesbians to serve openly. 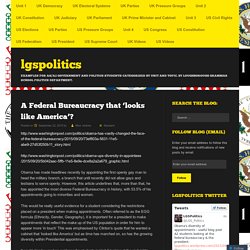 However, this article underlines that, more than that, he has appointed the most diverse Federal Bureaucracy in history, with 53.5% of his appointments going to minorities and women. This would be really useful evidence for a student considering the restrictions placed on a president when making appointments. 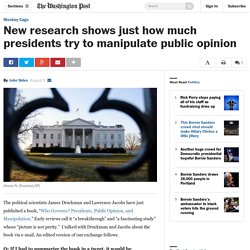 Ghanbari/AP) The political scientists James Druckman and Lawrence Jacobs have just published a book, “Who Governs? Presidents, Public Opinion, and Manipulation.” The month that changed America? - BBC News. Does history change all at once? June 2015 certainly had its singular historic moments - but almost all were the outcome of long-term forces and long-fought battles, say Nick Bryant. The shelves of American bookstores almost buckle under the weight of titles identifying a single year, season, month, week, day or hour as essential turning points in history's long march. So one would imagine that publishers are already being inundated with pitches for books bringing together the events of the past few weeks, perhaps under the working titles of "Ten Days in June", "America's Liberal Spring", "The Summer of Love" or "June 2015: The month that changed America.