Lords reform: the Lords is more diverse and democratic than the Commons. Nick Clegg describes the House of Lords as "an affront to democracy" and wants it to be wholly or mainly elected. 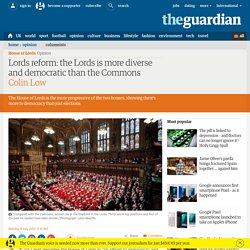 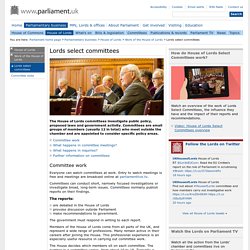 Committees are small groups of members (usually 12 in total) who meet outside the chamber and are appointed to consider specific policy areas. Everyone can watch committees at work. Entry to watch meetings is free and meetings are broadcast online at parliamentlive.tv. Committees can conduct short, narrowly focused investigations or investigate broad, long-term issues. Committees normally publish reports on their findings. Tories should respect the House of Lords for their trade union revolt. On the night when MPs, press, business, charity, City interests and lobby groups were poring over the entrails of the budget, across the way the Lords rebelled spectacularly three times over the trade union bill. 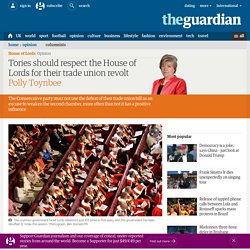 They did what they were put there for – they stood as a backstop to protect basic rights. This bill, unamended, would have poleaxed trade union membership and Labour’s funding base, without a whisper about corrupt Tory finances. It was plain the government was driving fast into a brick wall, foot down on the accelerator. This has been obvious ever since the ex-Treasury mandarin Lord Terry Burns – no lefty, he – set up an all-party Lords committee that recommended sensible compromises. By two to one the government lost its plan to make every trade unionist write by post to agree to staying in a political fund, with only three months to arrange this. Time to cut the House of Lords down to size. The House of Lords: “It is often described as ‘unreformed’ but the removal of most hereditary peers in 1999 was transformative.” © Geoff Pugh/Telegraph/PA Archive/Press Association Read a transcript of Prospect’s roundtable on House of Lords reform Eighteen years ago, Tony Blair’s first government swept to power on a manifesto promising a two-stage reform of the House of Lords: to remove the hundreds of hereditary peers then dominating the chamber, and subsequently to establish a “more democratic and representative” replacement. 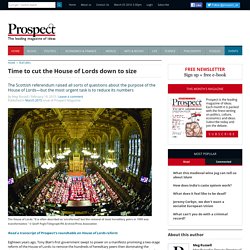 The first stage largely happened; the second did not—though not for want of discussion. Since 1997, six consecutive government white papers have been published on Lords reform, plus innumerable reports from parliamentary committees and outside bodies (including a Royal Commission). In 2011 Nick Clegg got as far as introducing a bill to create a largely elected second chamber, but abandoned it following joint opposition from Conservative and Labour MPs. Who needs the House of Lords? This excellent article is a must read for students studying Parliament in Unit 2. 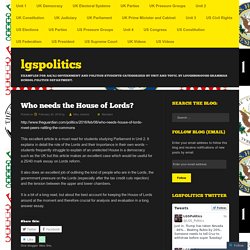 It explains in detail the role of the Lords and their importance in their own words – students frequently struggle to explain of an unelected House in a democracy such as the UK but this article makes an excellent case which would be useful for a 25/40 mark essay on Lords reform. Curbing the power of the Lords. Parliamentary reform and the power of the Lords is a common theme is Unit 2 questions; it is also frequently poorly answered by students who can easily identity the weaknesses of Lords holding power in a democracy but are less good at identifying the strengths. 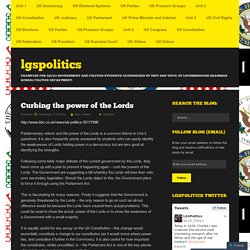 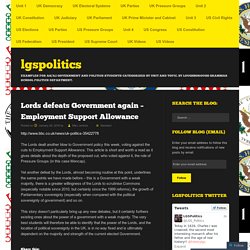 This article is short and worth a read as it gives details about the depth of the proposed cut, who voted against it, the role of Pressure Groups (in this case Mencap). Yet another defeat by the Lords, almost becoming routine at this point, underlines the same points we have made before – this is a Government with a weak majority, there is a greater willingness of the Lords to scrutinise Commons (especially notable since 2010, but certainly since the 1999 reforms), the growth of Parliamentary sovereignty (especially when compared with the political sovereignty of government) and so on. House of Lords – Scotland and the EU.

The House of Lords has been noticeably more active since reforms in 1999, but even more so since the 2015 election. 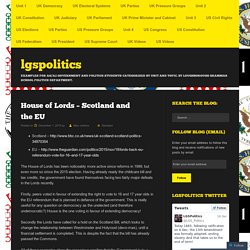 Having already ready the childcare bill and tax credits, the government have found themselves facing two fairly major defeats in the Lords recently. Firstly, peers voted in favour of extending the right to vote to 16 and 17 year olds in the EU referendum that is planned in defiance of the government. This is really useful for any question on democracy as the unelected (and therefore undemocratic?) House is the one voting in favour of extending democracy! Secondly the Lords have called for a hold on the Scotland Bill, which looks to change the relationship between Westminster and Holyrood (devo-max), until a financial settlement is completed.

Representation in the Lords. The Commission on Religion and Belief in Public Life has published a report calling for fewer bishops in the Lords to make way for religious leaders of other faiths. 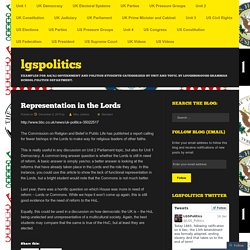 This is really useful in any discussion on Unit 2 Parliament topic, but also for Unit 1 Democracy. A common long answer question is whether the Lords is still in need of reform. A basic answer is simply yes/no; a better answer is looking at the reforms that have already taken place in the Lords and the role they play.

In this instance, you could use this article to show the lack of functional representation in the Lords, but a bright student would note that the Commons is not much better. Last year, there was a horrific question on which House was more in need of reform – Lords or Commons. 16/17 to get the vote? Previous blog post – The House of Commons have rejected calls for 16/17 year olds to be given the vote in the coming EU referendum. 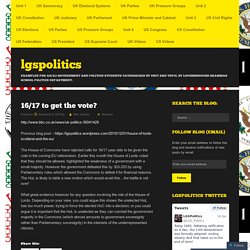 Earlier this month the House of Lords voted that they should be allowed, highlighted the weakness of a government with a small majority. However the government defeated this by 303-253 by using Parliamentary rules which allowed the Commons to defeat it for financial reasons. The Tories are unstitching the tapestry of our democracy. Around about now, had David Cameron and George Osborne not been saved from themselves, a lot of people were going to have a Fright Christmas. An unfestive greeting from Downing Street was scheduled to thump through the letter boxes of millions of voters with the miserable tidings that the government was about to make them very much worse off because of cuts to tax credits. If that had occurred, this would also be happening. Agitated Tory MPs would be all over the airwaves howling to interviewers that their constituency surgeries were filling up with distressed and angry voters.

The news bulletins would be leading with the stories of the cuts’ distraught victims, some tearfully telling reporters that they had been forced to tell their children that Santa Claus would not be visiting them this year. Commons vs Lords! Tax credit cuts – the basics: Osbourne’s plan to cut tax credits for the lowly paid has been the government’s most controversial legislation to date. Critics say it will cut up to £1,300 per year for the lowest paid workers in the UK. The government say cuts are offset by the raise in the minimum wage to £9 per hour, however this isn’t to be realised until towards the end of this parliament (2020). Government Defeats in the House of Lords. Tax credits: Pay up, George, you know you're cornered. Should the House of Lords vote to force George Osborne to rethink his flawed tax credit cuts? Yes. Are David Cameron and his allies talking nonsense when they invoke a constitutional crisis if that happens? Yes again. Will it happen? Vandalise tax credit reform at your peril, my Lords.

In recent months, the House of Lords has had a collective rush of blood to the head. To call its present turbulence over Conservative plans to cut tax credits a “constitutional crisis” is premature. But today’s feisty shin-kicking in the Lords could be tomorrow’s legislative wreck. Not that the Tories are the only party to have been embarrassed by antics in the second chamber. The Role of the House of Lords and Cameron. While these stories are a couple of months old, they are invaluable ‘idiot’s guides’ for students studying Parliament in Unit 2.