Judicial review provides value for money and an important route to fair treatment for individuals. Government Defeated In Legal Aid Test Plan. Judges have overturned Government plans to deny legal aid to people who have not lived in the UK continuously for at least 12 months. 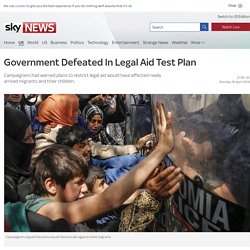 The Supreme Court announced it is to allow an appeal by campaigners against proposals for a so-called residence test, which they argued restricted access to justice for foreign-born individuals in civil cases. The ruling was a victory for legal charity Public Law Project (PLP), represented by law firm Bindmans. The residence test would have restricted civic legal aid to people who have lived in the UK, Crown dependencies or British overseas territories continuously for a period of at least 12 months at the time they applied for aid.

But human rights campaigners had warned the plans would have had a particularly serious impact on recently arrived migrants and their children. A panel of seven Supreme Court justices agreed and ruled that if implemented the move would constitute an act ultra vires (beyond legal authority). ‘A Moment of Genuine Legal History’ The title of this post is taken from the BBC’s analysis of this case as I couldn’t have put it better – the ‘joint enterprise’ ruling in Feb 2016 was ‘a moment of genuine legal history’ and about the best example a student of Judiciary in Unit 2 can have. 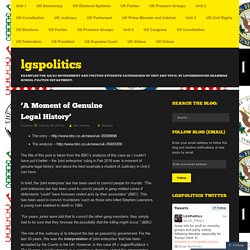 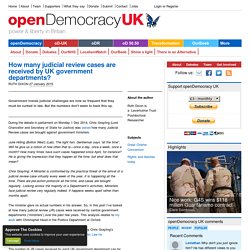 But the numbers don't seem to back this up. During the debate in parliament on Monday 1 Dec 2014, Chris Grayling (Lord Chancellor and Secretary of State for Justice) was asked how many Judicial Review cases are brought against government ministers. Julie Hilling (Bolton West) (Lab): The right hon. Gentleman says “all the time”. Will he give us a notion of how often that is—once a day, once a week, once a month? Judicial Review. This section contains information and guidance about judicial review in England and Wales. 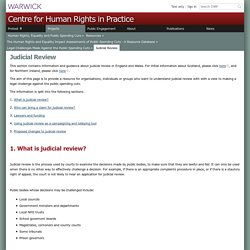 For initial information about Scotland, please click here , and for Northern Ireland, please click here The aim of this page is to provide a resource for organisations, individuals or groups who want to understand judicial review with with a view to making a legal challenge against the public spending cuts. The information is split into the following sections: 1. 2. 3. 4. 5. 1. Judicial Review reform: An attack on our legal rights? Judicial review isn't 'sexy', but it is important. 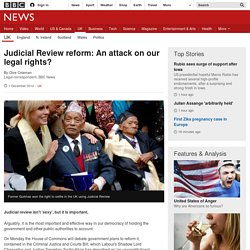 Arguably, it is the most important and effective way in our democracy of holding the government and other public authorities to account. On Monday the House of Commons will debate government plans to reform it, contained in the Criminal Justice and Courts Bill, which Labour's Shadow Lord Chancellor and Justice Secretary Sadiq Khan has described as 'an unconstitutional attack on the rights of the British people'. Is that hyperbole, or is this truly a constitutional issue of unique importance? Put simply judicial review is the process by which ordinary people and organisations can apply to the courts to challenge the lawfulness of decisions made by public bodies, including government.

It enshrines the citizen's right to ask a judge to consider whether a public body has followed its own rules - usually those set out by Parliament or ministers. Hillsborough and Judicial Review. Judicial Review of Civil Partnerships. A couple has launched a judicial review against the Government saying that civil partnerships should be available to all couples in the UK, not just same-sex couples. 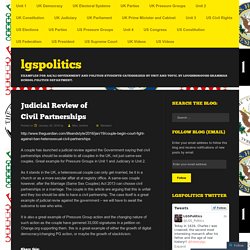 Great example for Pressure Groups in Unit 1 and Judiciary in Unit 2. As it stands in the UK, a heterosexual couple can only get married, be it in a church or as a more secular affair at at registry office. A same-sex couple however, after the Marriage (Same Sex Couples) Act 2013 can choose civil partnerships or a marriage. Bedroom Tax – Govt defeated by Court of Appeal. This week, the Government’s attempts to tax people who live in social housing but have spare bedrooms faced a challenge in the Court of Appeal. 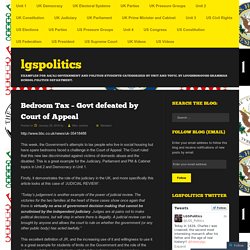 The Court ruled that this new law discriminated against victims of domestic abuse and the disabled. Judicial Review of the UK Drone Strikes. Judicial Review remains one of the most challenging concepts that students seem to find at AS level. 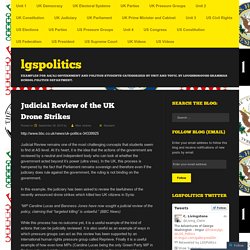 At it’s heart, it is the idea that the actions of the government are reviewed by a neutral and independent body who can look at whether the government acted beyond it’s power (ultra vires).