Reforming party funding by stealth and compromise may have longer-term consequences. Since the 2015 general election the government has introduced two measures –proposals relating to trade union political funds and cuts to Short money – that have the potential to affect the funding of at least some political parties. 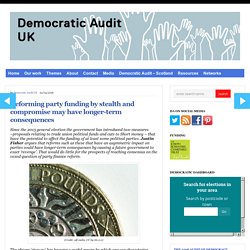 Justin Fisher argues that reforms such as these that have an asymmetric impact on parties could have longer-term consequences by causing a future government to exact ‘revenge’. That would do little for the prospects of reaching consensus on the vexed question of party finance reform. (Credit: alf.melin, CC by SA 2.0) The phrase ‘stop-go’ has become a useful means by which one can characterise Britain’s approach to party finance reform since 2000, when the wide ranging Political Parties, Elections and Referendums Act (PPERA) was passed. Labour Party made £10 million more than Tories last year following a surge of new members  Tories under investigation by Electoral Commission over 'breaking election spending rules' The Electoral Commission has launched an inquiry into whether the Conservatives violated election spending rules at the general election. 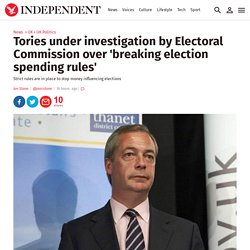 An investigation by Channel 4 News said that alleged irregularities in recording expenses in Thanet South meant the Tories broke spending limits during the campaign. During last year's election Ukip’s Nigel Farage lost to the Tories’ Craig Mackinlay in one of the most high-profile contests in the country. The loss for Ukip sparked Mr Farage’s short-lived resignation as party leader. However, the Conservatives were said to have attributed £14,000 worth of hotel bills spent for activists in Thanet South to “national” election expenditure rather than to Thanet South’s account. Parties were restricted to spending a maximum of £15,016 on the constituency – allocating the bills to national expenditure may have meant the Conservatives were able to spend more money on other campaigning activity to win the crucial vote.

General election 2015: Polling day. Labour predicts trade union bill would cut party funding by £8m. Labour could lose up to £8m a year as a result of the government’s changes to trade union funding, the party’s general secretary has revealed. 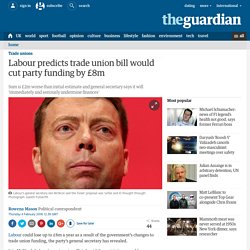 Iain McNicol, Labour’s most senior official, said the restrictions would “immediately and seriously undermine the Labour party’s finances”. The sum is £2m more than initial estimates of what Labour would lose from the reforms brought in by the Conservatives under the trade union bill. It will combine with cuts to public funding of opposition parties – known as Short money – to cripple Labour’s traditional methods of financing. McNicol told a House of Lords committee: “Our own estimate is that a change to trade union political funds, as proposed, could reduce the Labour party’s income by up to £8m a year. British political parties have risk of 'policy capture' by powerful donors, warns OECD report into private funding. Britain has some of the highest rates of private funding for political parties in Europe, according to an international study which highlights the risk of "policy capture" by powerful donors. 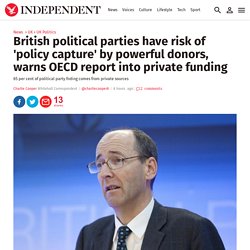 The report found that 65 per cent of political party funding in the UK comes from private sources – the joint highest of 16 European countries analysed by the Organisation for Economic Cooperation and Development (OECD). Britain is also one of only 10 out of 25 wealthy countries with no limit on the size of donations to both political parties and political candidates in elections. The OECD report said that, across the world, increasing concentration of wealth in fewer hands posed “a significant threat to political and economic systems” warning that, without proper regulation, could allow “special interests to exercise undue influence and ‘capture’ the policy process”.

"It leaves a stench in the nostrils of the electorate," he said. "There should be a cap on the amount that can be donated. " Labour could stop cooperating with Tories in protest at party funding cuts. Labour is considering withdrawing cooperation with the Conservatives in Westminster over a proposed 19% reduction in state money to opposition parties in parliament. 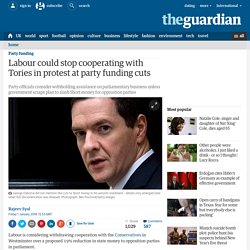 Party officials confirmed they would consider halting cooperation with the Tories over parliamentary business unless the government considers rowing back on plans to cut “Short money” (named after Ted Short, a former leader of the Commons) announced in the autumn statement. Tim Farron, the Lib Dem leader, has described the cuts as an attack on democracy. 2015 election fundraising. Revision notes on party funding. Deal or No Deal 17 Feb funding reform. Party funding standard note.