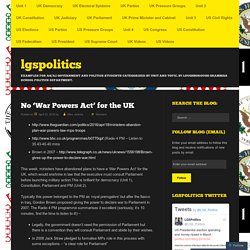 Typically this power belonged to the PM as ‘royal prerogative’ but after the fiasco in Iraq, Gordon Brown proposed giving the power to declare war to Parliament in 2007. The Radio 4 PM programme summarises it excellent (seriously, it’s 10 minutes, find the time to listen to it!) – The rejection of this as an Act effectively keeps the situation the same – a convention that Parliament will be consulted but power remaining with the PM. This is really useful to students in evaluating a range of (mostly long-answer) questions and could be used as example in all of these questions: Like this: Like Loading... Cameron gives his Ministers a free vote on EU. UPDATE – 14th Jan – As expected Cameron announced that when it comes to the EU referendum, his Cabinet Ministers will be allowed to campaign for either side of the referendum whilst remaining part of the government. 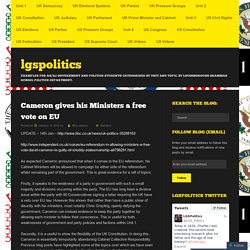 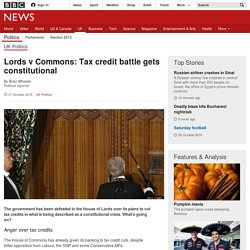 The Lords and tax credits: fact and myth. The power of the House of Lords over ‘delegated legislation’, and financial matters, has become a hot topic due to threats to defeat the government’s planned cuts to tax credits. 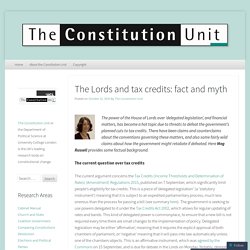 There have been claims and counterclaims about the conventions governing these matters, and also some fairly wild claims about how the government might retaliate if defeated. Here Meg Russell provides some factual background. The current question over tax credits The current argument concerns the Tax Credits (Income Thresholds and Determination of Rates) (Amendment) Regulations 2015, published on 7 September, which significantly limit people’s eligibility for tax credits. This is a piece of ‘delegated legislation’ (a ‘statutory instrument’) meaning that it is subject to an expedited parliamentary process, much less onerous than the process for passing a bill (see summary here). Tax credits vote: PM accuses Lords of breaking constitutional convention. David Cameron is planning to set limits on the power of the House of Lords after George Osborne suffered a major blow to his authority when peers voted to delay tax credit cuts in order to protect those who would lose out. 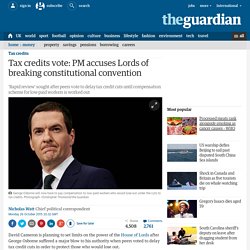 Downing Street will on Tuesday outline plans for a “rapid review” that will examine ways to guarantee that the House of Commons always has supremacy on financial matters, after the prime minister accused peers of breaking a constitutional convention. The move comes after peers voted in favour of a motion by the former Labour minister Lady Hollis to halt the cuts until the government produces a scheme to compensate low-paid workers for three years. A furious prime minister made clear that the upper house had ridden roughshod over conventions dating back to the aftermath of Lloyd George’s People’s Budget of 1909 and beyond, according to which peers do not interfere in financial matters. 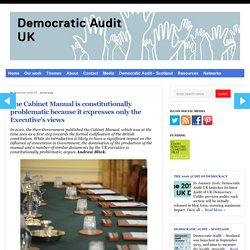 While its introduction is likely to have a significant impact on the influence of convention in Government, the domination of the production of the manual and a number of similar documents by the UK executive is constitutionally problematic, argues Andrew Blick. Credit: The Prime Minister’s Office, CC BY 2.0 A process currently underway in the UK has important implications for the way we are governed, raising difficult questions about the democratic legitimacy of the system itself. The Cabinet Manual, first published in October 2011, exemplifies this tendency.

Conventions – defined here as rules that are not legally enacted – are important to any constitution. EU referendum: 'Significant' changes to rules for vote - BBC News. Image copyright Thinkstock Rules on campaigning in the UK's in-out EU referendum are to face "significant" changes, the government is to announce. 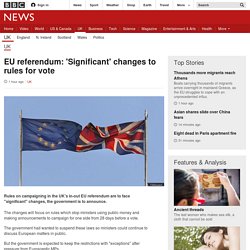 The changes will focus on rules which stop ministers using public money and making announcements to campaign for one side from 28 days before a vote. The government had wanted to suspend these laws so ministers could continue to discuss European matters in public. But the government is expected to keep the restrictions with "exceptions" after pressure from Eurosceptic MPs. Eurosceptic MPs have argued that by relaxing the so-called purdah rules, the pro-EU camp could potentially benefit from the "machinery of government".

The Political Parties, Elections and Referendums Act 2000 sets out a 28-day period ahead of any referendum, during which ministers, government departments and local authorities are banned from publishing material relating to the issue in question. 'Shadow of doubt' Image copyright PA 'Seen to be fair' "It has got to be fair.