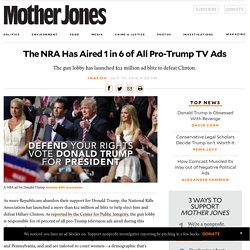 As reported by the Center for Public Integrity, the gun lobby is responsible for 16 percent of all pro-Trump television ads aired during this election cycle. The NRA ads mostly target residents in the swing states of Ohio, North Carolina, and Pennsylvania, and and are tailored to court women—a demographic that's expected to largely vote against Trump. According to CPI, the NRA has been behind about 1 of every 8 presidential TV ads aired in Ohio in October. The mud-slingers: the most shocking presidential attack ads ever aired. They may be seen more on YouTube than conventional television these days, but a presidential campaign advertisement can still scandalise, distill a message like little else, and even swing an election. 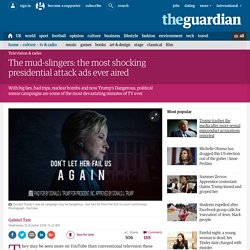 Donald Trump’s latest, Dangerous, is already stoking outrage with its signature offensive of innuendo and untruth, but he’s hardly the first to court controversy. How do some of the most notorious campaign ads in history stack up against it? Dangerous (2016) An unusual candidate in every respect, Trump has long favoured Twitter and the use of his celebrity to leverage free TV coverage over traditional campaign ads. The latter tend to play like an intro to his benighted Celebrity Apprentice: stolid, explicit and exhausting. Daisy Girl (1964) Girl counts petals picked from a flower. Willie Horton (1988) Mirrors (2016) Over plaintive piano and a slurry of Trump misogyny, a group of young girls comb their hair before a question is posed.

Convention (1968) Any Questions? Clinton Echoes LBJ's 'Daisy' Ad in New Spot. Hillary Clinton is paying homage to one of the most famous presidential ads in history with a new spot that raises the possibility of nuclear war if Donald Trump wins the White House. 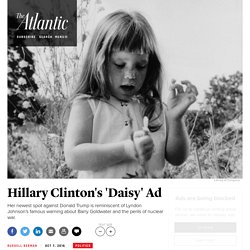 The 30-second ad called “Silo” features testimony from a former nuclear missile launch officer named Bruce Blair, who describes how he “prayed” that he would never receive a launch order he would be sworn to obey from a president. “If the president gave the order we had to launch the missiles, that would be it,” Blair says in the ad. “I prayed that call would never come. Self-control may be all that keeps these missiles from firing.” Donald Trump attacks Hillary Clinton in first general election TV ad. Donald Trump has launched his first TV ad for the general election. 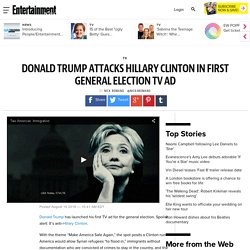 Spoiler alert: It’s anti-Hillary Clinton. With the theme “Make America Safe Again,” the spot posits a Clinton-run America would allow Syrian refugees “to flood in,” immigrants without documentation who are convicted of crimes to stay in the country, and the borders to remain open. “It’s more of the same, but worse,” says the narrator. Continuing the play on America’s safety, the Republican presidential nominee’s ad states that a Trump America would achieve the opposite. Elsewhere, the narrator states, “In Hillary Clinton’s America, the system stays rigged against Americans,” echoing a statement Trump made during a rally in Columbus, Ohio, on Aug. 2. “Nov. 8, we’d better be careful, because that election is going to be rigged,” he told supporters at the event. 10 of the nastiest political attack ads of all time. Negative political ads and voter effects: Research roundup.

Many people have a visceral reaction to political attack ads on TV: Not much will prompt a faster change of the channel. 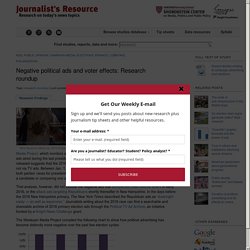 But they are difficult to escape during election season and it is doubtful that the 2016 presidential election season will be much different. Political ads became much more negative over the course of the 2012 presidential campaign. Erika Franklin Fowler, an assistant professor of government, noted that 2012 will likely be remembered for its record-setting negativity. You might see some of Trump&apos;s debate comebacks again — in Democratic attack ads. Donald Trump cast Hillary Clinton as a corrupt and incompetent politician from a bygone era as he sought to recover Tuesday from his poorly received performance in the first debate of the general election. 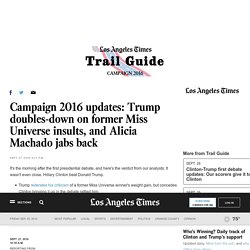 The Republican presidential nominee wrapped up a one-day Florida campaign swing with blasts of lacerating rhetoric at a rally near Cape Canaveral. “We’re going to take on the special interests, the lobbyists, and the corrupt corporate media right back there,” Trump told thousands of supporters packed into a sweltering airplane hangar. As many of them turned to boo the news crews behind them, Trump added: “They are as corrupt as you can get.”

Will These Anti-Trump Ads Be the Killer Spots of the 2016 Campaign? Lucas Jackson/ZUMA The Clinton campaign has released sharp ads attacking Donald Trump for his erratic temperament, his long history of misogynistic remarks, and his lack of foreign policy experience. 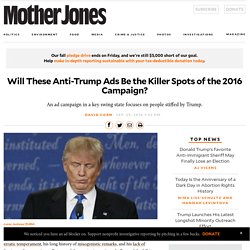 Hillary Clinton’s new attack ad paints Trump as a bad role model. Hillary Clinton Launches First TV Ads. August 2, 2015 Hillary Clinton is launching her first television ads of the 2016 presidential campaign, reintroducing herself to voters in Iowa and New Hampshire with a message that focuses heavily on her life story and the memory of her mother. 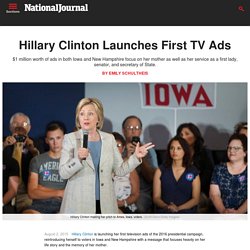 Two 60-second TV ads will begin airing Tuesday, Clinton's campaign said Sunday night. One ad, "Family Strong," runs through the highlights of Clinton's career, including her decision to become secretary of State and her time at the Children's Defense Fund—both stories that come up frequently on the campaign trail. "After law school, she could have gone to a big firm, but instead went to work for the Children's Defense Fund," a narrator says. "In Arkansas, she fought for school reform to change lives forever. Then as first lady, she helped get health care for 8 million kids. The other ad is titled "Dorothy" and focuses on the candidate's mother, Dorothy Howell Rodham.