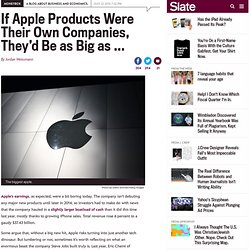 The company isn't debuting any major new products until later in 2014, so investors had to make do with news that the company hauled in a slightly larger boatload of cash than it did this time last year, mostly thanks to growing iPhone sales. Total revenue rose 6 percent to a gaudy $37.43 billion. Some argue that, without a big new hit, Apple risks turning into just another tech dinosaur. But lumbering or not, sometimes it's worth reflecting on what an enormous beast the company Steve Jobs built truly is. First, about the iPhone. Heartbleed Explanation. Recon Jet: Worlds Most Advanced Wearable Computer. Recon Jet is a new wearable computer being introduced by Recon Industries.

Several companies are pushing this new wave of wearable technology including , Google Glass and a design by Takahito Iguchi called Telepathy One. Recon jet is doing a limited presage event this week. Don’t wait, you only have 4 more days to get “The Worlds Most Advanced Wearble Computer” at a discount. The Recon Jet is set to start shipping in December. Personally, I like the design of the Recon Jet much better than Google Glass. Serious Wonder readers are very familiar with the idea of wearable technologies. According to the Recon Instruments website: Theorizing the Web, IRL. Two weekends ago, I was lucky enough to take part in the third annual Theorizing the Web Conference. 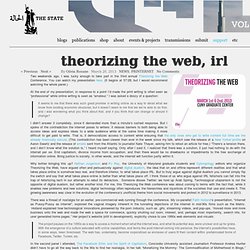 You can watch my presentation here. (It begins at 57:28, but I would recommend watching the whole panel.) Quantum Teleportation in Space Explored as Message Encryption Solution. This story was originally published by Inside Science News Service. 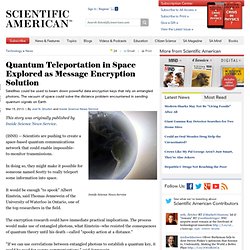 (ISNS) -- Scientists are pushing to create a space-based quantum communications network that could enable impossible-to-monitor transmissions. In doing so, they might make it possible for someone named Scotty to really teleport some information into space. It would be enough "to spook" Albert Einstein, said Thomas Jennewein of the University of Waterloo in Ontario, one of the top researchers in the field. The encryption research could have immediate practical implications. The process would make use of entangled photons, what Einstein--who resisted the consequences of quantum theory until his death --called "spooky action at a distance. " "If we can use correlations between entangled photons to establish a quantum key, it could be used for secure communications," said Jennewein. But in 1972, a group of U.S. scientists showed that is exactly what happens, at least over the short distances of their laboratory experiment.

Syrian Cyber-Rebel Wages War, One Hack At A Time. Hide captionAhmad "Harvester" Heidar is a computer software engineer whose work for the Syrian rebels includes sweeping the hard drives of detained anti-government activists, and trying to develop a robot that will help extract sniper victims in Syria. 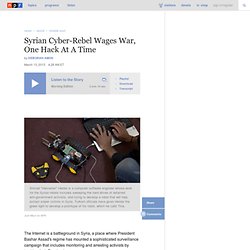 Turkish officials have given Heidar the green light to develop a prototype of his robot, which he calls Tina. Jodi Hilton for NPR The Internet is a battleground in Syria, a place where President Bashar Assad's regime has mounted a sophisticated surveillance campaign that includes monitoring and arresting activists by tracking their Facebook pages. The Syrian Electronic Army, an arm of the Syrian military, is in charge of the monitoring. 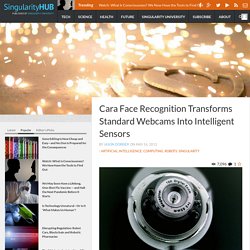 ARKYD: A Space Telescope for Everyone by Planetary Resources. From all of us on the ARKYD Team – A Heartfelt Thank You! 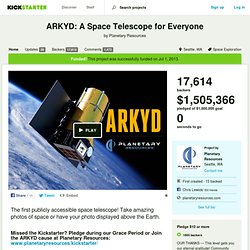 The ARKYD journey continues and we’re delighted to have you on board as we invent the future. 06-30-2013 — Stretch Goal #3 Reached: We will now team with Zooniverse to develop a platform that will allow YOU to find asteroids at home, and help train computers to better find them in the future! 06-30-2013 — Stretch Goal #2 Reached: Every selfie pledge or higher will now receive an exclusive digital Beta-Selfie, taken in 2014 during the crucial integration phase of spacecraft build! 06-30-2013 — Sir Richard Branson pledges $100,000 for ARKYD to support STEM education and space accessibility.

Anatomy of a hack: How crackers ransack passwords like “qeadzcwrsfxv1331” 25-GPU cluster cracks every standard Windows password in <6 hours. A password-cracking expert has unveiled a computer cluster that can cycle through as many as 350 billion guesses per second. 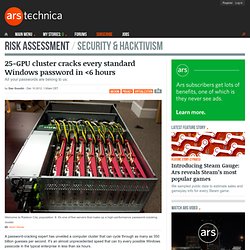 It's an almost unprecedented speed that can try every possible Windows passcode in the typical enterprise in less than six hours. The five-server system uses a relatively new package of virtualization software that harnesses the power of 25 AMD Radeon graphics cards. It achieves the 350 billion-guess-per-second speed when cracking password hashes generated by the NTLM cryptographic algorithm that Microsoft has included in every version of Windows since Server 2003. As a result, it can try an astounding 958 combinations in just 5.5 hours, enough to brute force every possible eight-character password containing upper- and lower-case letters, digits, and symbols. Such password policies are common in many enterprise settings. Gosney unveiled the machine last week at the Passwords^12 conference in Oslo, Norway.