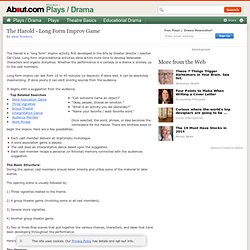 Long form improvisational activities allow actors more time to develop believable characters and organic storylines. Whether the performance is a comedy or a drama is entirely up to the cast members. Long form improv can last from 10 to 45 minutes (or beyond)! If done well, it can be absolutely mesmerizing. If done poorly it can elicit snoring sounds from the audience. It begins with a suggestion from the audience. "Can someone name an object? " Once selected, the word, phrase, or idea becomes the centerpiece for the Harold. Each cast member delivers an impromptu monologue. The Basic Structure: During the opener, cast members should listen intently and utilize some of the material In later scenes. The opening scene is usually followed by: 1) Three vignettes related to the theme. 2) A group theater game (involving some or all cast members). 3) Several more vignettes.

Improv Game - Genre Switching - Drama Activity. For this improvisational activity, the actors select a random setting (or receive a suggested location from the audience). 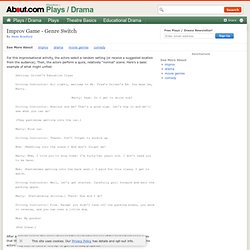 Then, the actors perform a quick, relatively “normal” scene. Here’s a basic example of what might unfold: Setting: Driver’s Education Class Driving Instructor: All righty, welcome to Mr. Fred’s Driver’s Ed. You must be, Marty. Improv Game - Off - Script. Most stage actors have been through this moment more than once: You are on stage, performing some big, important role in an extremely dramatic play. 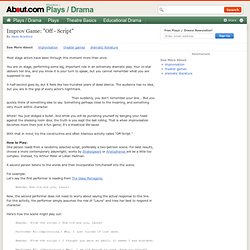 Your co-star delivers her line, and you know it is your turn to speak, but you cannot remember what you are supposed to say. A half-second goes by, but it feels like two-hundred years of dead silence. The audience has no idea, but you are in the grip of every actor's nightmare. Then suddenly, you don't remember your line... Whew!

With that in mind, try this constructive and often hilarious activity called "Off-Script. " How to Play: One person reads from a randomly selected script, preferably a two-petrson scene. Improvisation Game - Foreign Film. This improvisational activity requires at least four actors. 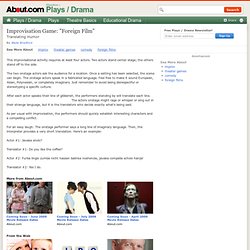 Two actors stand center stage; the others stand off to the side. The two onstage actors ask the audience for a location. Once a setting has been selected, the scene can begin. The onstage actors speak in a fabricated language. Feel free to make it sound European, Asian, Polynesian, or completely imaginary. After each actor speaks their line of gibberish, the performers standing by will translate each line. As per usual with improvisation, the performers should quickly establish interesting characters and a compelling conflict. For an easy laugh: The onstage performer says a long line of imaginary language. Actor #1: Javaka sholo? Translator #1: Do you like the coffee? Actor #2: Furba linglo zumba nicht hassen balinka noshenzie, javaka compella scholo hanja! Improv Game - Surprise Guests. This improv game can be used as a light-hearted drama exercise or a theatrical party activity. 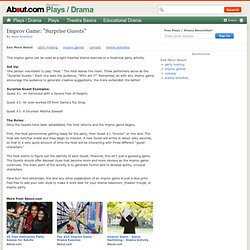 Set Up: One person volunteers to play "Host. " The Host leaves the room. Three performers serve as the "Surprise Guests. " Each one asks the audience, "Who am I? " Remember, as with any improv game, encourage the audience to generate creative suggestions; the more outlandish the better! Surprise Guest Examples: Guest #1: An Astronaut with a Severe Fear of Heights Guest #2: An over-worked Elf from Santa's Toy Shop Guest #3: A Drunken Martha Stewart. 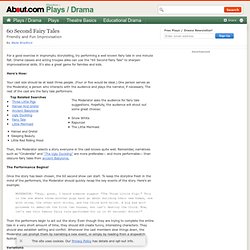 Drama classes and acting troupes alike can use the “60 Second Fairy Tale” to sharpen improvisational skills. It's also a great game for families and kids. Here's How: Your cast size should be at least three people. (Four or five would be ideal.) The Moderator asks the audience for fairy tale suggestions. Snow WhiteRapunzelThe Little MermaidHansel and GretelSleeping BeautyLittle Red Riding Hood Then, the Moderator selects a story everyone in the cast knows quite well. Improv Game - Taxi Cab. I have seen this game performed by children as well as sharp-witted members of Improv Groups. 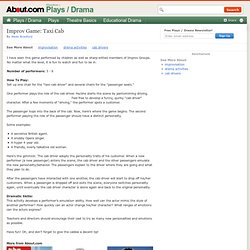 No matter what the level, it is fun to watch and fun to be in. Number of performers: 3 - 6 How To Play: Set up one chair for the "taxi-cab driver" and several chairs for the "passenger seats. " Improv Game - Freeze Tag. The Basics: "Freeze Tag" (also known simply as "Freeze") is an improvisation game is a great drama exercise for performers at any level. 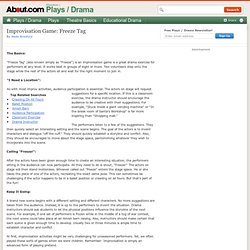 It works best in groups of eight or more. Two volunteers step onto the stage while the rest of the actors sit and wait for the right moment to join in. "I Need a Location": As with most improv activities, audience participation is essential.