Visual literacy wp. Videos — Toledo Museum of Art. Studies Confirm the Power of Visuals in eLearning. We are now in the age of visual information where visual content plays a role in every part of life. As 65 percent of the population is visual learners, images are clearly key to engaging people in eLearning courses. Moving and still images have been included in learning materials for decades, but only now has faster broadband, cellular networks, and high-resolution screens made it possible for high-quality images to be a part of eLearning visual design.

Graphic interfaces made up of photos, illustrations, charts, maps, diagrams, and videos are gradually replacing text-based courses. In this post, we will dig deep into some statistics and facts to further convince of why eLearning developers should embrace visuals when creating their courses. 1. Both the short-term and long-term memory store information in chunks, but the former is limited. According to Dr. Furthermore, this effect increases over time. 2. According to the Visual Teaching Alliance: Image source: Uberflip Blog 4. 5. 6. Videos — Toledo Museum of Art.

Visual Literacy: An E-Learning Tutorial on Visualization for Communication, Engineering and Business. Dr. Lynell Burmark Archives - Soffront Blog. Unless you’ve been completely unplugged from all technology for years, you’ll know that visual content/communication and storytelling are incredibly important. 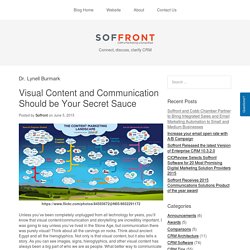 I was going to say unless you’ve lived in the Stone Age, but communication there was purely visual! Think about all the carvings on rocks. Think about ancient Egypt and all the hieroglyphics. Not only is that visual content, but it also tells a story. As you can see images, signs, hieroglyphics, and other visual content has always been a big part of who we are as people. I’m going to give you a little psychological babble here. When we think we think in terms of a movie playing out in our head.

Combining the two pieces of content, visuals and stories, will make for a powerful 1-2 punch. In reading the previous short paragraph, I bet you have several images in your head right now. Dr. Lynell Burmark Archives - Soffront Blog. Medlit excerpt. Visual Literacy. Picture This! Visual Literacy in the Classroom. Research shows that Visual Literacy, “a person’s ability to interpret and create visual information—to understand images of all kinds and use them to communicate more effectively,” is a successful strategy for all learners (Burmark, 2002, p. v). 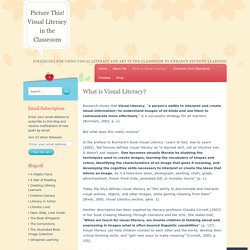 But what does this really involve? In the preface to Burmark’s book Visual Literacy: Learn to See, See to Learn (2002), Tad Simons defines visual literacy as “a learned skill, not an intuitive one. It doesn’t just happen. One becomes visually literate by studying the techniques used to create images, learning the vocabulary of shapes and colors, identifying the characteristics of an image that gives it meaning, and developing the cognitive skills necessary to interpret or create the ideas that inform an image, be it a television show, photograph, painting, chart, graph, advertisement, Power Point slide, animated GIF, or monster movie” (p. v).

So what does this look like in the classroom? Lucas, Scorsese: On the need for visual literacy. A professional or student in the 21st century needs to have a good degree of multimedia literacy. 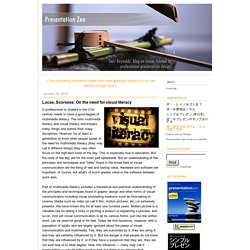 The term multimedia literacy and visual literacy encompass many things and borrow from many disciplines. However, for at least a generation or more when people speak of the need for multimedia literacy (they may call it different things) they very often focus on the high-tech tools of the day. This is especially true in education. But the tools of the day are for the most part ephemeral. But an understanding of the principles and techniques and "rules" found in the broad field of visual communication are the thing of real and lasting value. Part of multimedia literacy includes a theoretical and practical understanding of the principles and techniques found in graphic design and other forms of visual communication including visual storytelling mediums such as filmmaking or cinema.

"[Young people] need to know how ideas and emotions are expressed through a visual form. H/T to Edutopia. Reading images: an introduction to visual literacy. “Literacy” usually means the ability to read and write, but it can also refer to the ability to “read” kinds of signs other than words — for example, images or gestures. 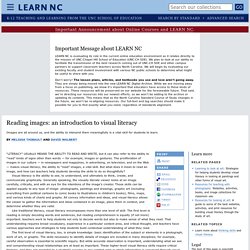 The proliferation of images in our culture — in newspapers and magazines, in advertising, on television, and on the Web — makes visual literacy , the ability to “read” images, a vital skill. But what does it mean to read an image, and how can teachers help students develop the skills to do so thoughtfully? Visual literacy is the ability to see, to understand, and ultimately to think, create, and communicate graphically. Tayla users guide to visual literacy.