The Best 3D Printers of 2017. Barely a decade ago, 3D printers were hulking, expensive machines reserved for factories and well-heeled corporations. 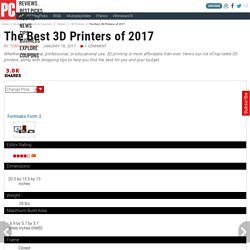 They were all but unknown outside the small circles of professionals that built and used them. But thanks largely to the RepRap open-source 3D printing movement, these amazing devices have become viable and affordable products for use by designers, engineers, hobbyists, schools, and even consumers. XYZprinting da Vinci Mini Review. The XYZprinting da Vinci Mini sells at a bargain price for a 3D printer, $289.95, but provides a more-than-satisfactory user experience for the newbies for whom it's designed. 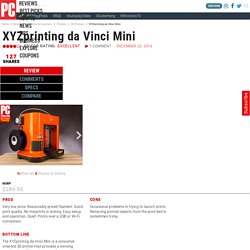 The da Vinci Mini is easy to set up and use, and in our testing consistently printed objects of good quality for the price, with no misprints. Its build volume is modest, its software occasionally stumbled when I tried to launch a print, and completed prints were sometimes difficult to remove from the print bed, but none of these are serious problems. The da Vinci Mini's combination of rock-bottom cost, easy setup, and good print quality and consistency are enough to make it our first Editors' Choice consumer 3D printer. Pricing Of the handful of consumer-oriented sub-$500 3D printers we've reviewed, the da Vinci Mini is the best.

Cardboard Creators: Reusing to Learn. 5 Tips to Create a Cost-Effective Makerspace Quickly. In the 2015 New Media Consortium Horizon Report, makerspaces were recognized as one the six most important educational technology developments. 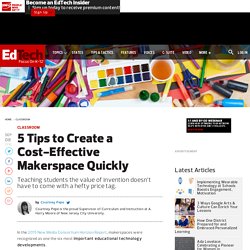 12 lessons from a year in a makerspace. When Connecticut’s New Canaan High School said goodbye to students in the summer of 2015, it said hello to an ambitious new project: boxing up 7,000 books to make room for a brand-new makerspace to encourage students’ creative thinking, problem-solving and self-directed learning. 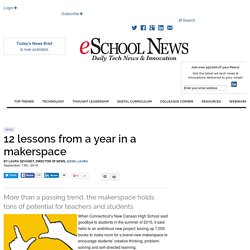 When the school’s new principal asked what library media specialists were doing with all the library’s books, and inquired about a makerspace, head librarian Michelle Luhtala knew she had a chance to do something unique with the library’s learning environment. “Kids just come in and make what they want,” Luhtala said. “That’s the thing that is so much fun.” As the year progressed, so too did the makerspace’s purpose. ?tag=nl. In 2015, we saw big advances in the quality, speed, and abilities of 3D printers. 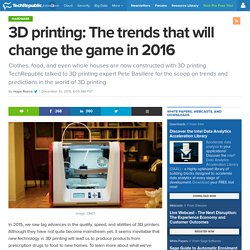 Although they have not quite become mainstream yet, it seems inevitable that new technology in 3D printing will lead us to produce products from prescription drugs to food to new homes. To learn more about what we've seen, and what's to come, TechRepublic spoke to Pete Basiliere, Research Director, Imaging and Print Services for Gartner, for his take on what's happening in 3D printing. How has 3D printing improved over the last year? It can be seen in the throughput of printers, the quality of the finished product, and the range of materials. For enterprise 3D printers, more effort is being put into quality assurance tools that integrate into the printer itself, so the operator can be assured of the quality as the part is being made. 2015 Best 3D Printers Guide.

The Makergear M2 is a well designed and reliable 3D printer and our community’s top choice for enthusiasts. 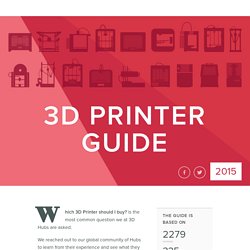 Founded in 2009, Makergear’s US manufactured M2 is already on its 3rd generation of 3D Printers. The M2 highlights Makergear’s experience and expertise in the industry. The M2 printer is built on a solid metal chassis, giving it a sturdy structure. This machine comes equipped with a heated platform which uses PLA or ABS to build objects of a maximum dimensions of 203 x 254 x 203 mm. It is a versatile 3D Printer that comes in either kit form or assembled. Best 3D Printer 2014 - Top-Rated 3D Printers. From classrooms to design shops, 3D printers seem to be popping everywhere. 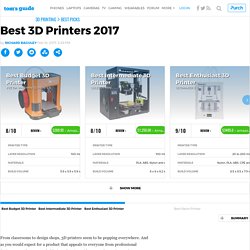 And as you would expect for a product that appeals to everyone from professional designers to educators to hobbyists, there's a wide array of 3D printers that vary wildly in both features and price tags. Based on our extensive evaluations and hours of testing of more than a dozen models in different price ranges, our top overall pick for those on a budget is the XYZ da Vinci Mini ($270), as its auto-calibration features are helpful to novices and it produces good prints at decent speeds.

(If you want to save a little money, consider the da Vinci miniMaker, which is selling for $45 less than the Mini on Amazon, but is essentially the same printer. It connects via USB instead of wirelessly like the Mini.) Because 3D printer makers are constantly announcing new models that cost less, print things faster and produce larger objects than ever before, it's worth knowing about just-released printers before you buy. Cheapest, Best & Most Reliable Desktop 3D Printers — 3DPrint’s 2015 Buyers Guide.

It’s rather crazy how many emails we receive on a daily basis asking us to suggest a 3D printer for a particular use. 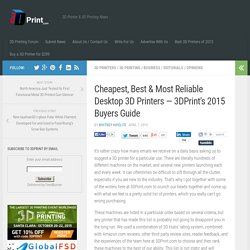 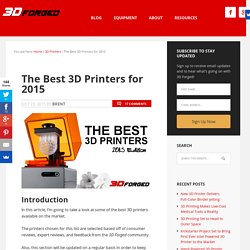 The printers chosen for this list are selected based off of consumer reviews, expert reviews, and feedback from the 3D Forged community. 5 steps for creating a custom makerspace. When schools talk about the maker movement and creating makerspaces, they often focus on purchasing the tools and materials first. 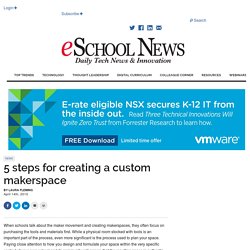 While a physical room stocked with tools is an important part of the process, even more significant is the process used to plan your space. Paying close attention to how you design and formulate your space within the very specific context of your own school and its community will ensure that the resulting space is authentic and meaningful to the whole school community. The following approach to planning will help ensure that your makerspace is a vibrant and thriving one. Step One: Understand your learners. Start with the learners!

Step Two: Assess existing curricula, programs, offerings within your school community. Edutopia. Libraries have existed since approximately 2600 BCE as an archive of recorded knowledge. From tablets and scrolls to bound books, they have cataloged resources and served as a locus of knowledge. Today, with the digitization of content and the ubiquity of the internet, information is no longer confined to printed materials accessible only in a single, physical location. Consider this: Project Gutenberg and its affiliates make over 100,000 public domain works available digitally, and Google has scanned over 30 million books through its library project. Libraries are reinventing themselves as content becomes more accessible online and their role becomes less about housing tomes and more about connecting learners and constructing knowledge.

Cushing Academy in Ashburnham, Massachusetts has been in the vanguard of this transition since 2009, when it announced its plans for a "bookless" library. US_EM_NASARoverVideo_Oct2014_LP. eSchool News Journey to the student-centered makerspace. Journey to the student-centered makerspace By Abbe Waldron February 5th, 2015 Explore a collaborative makerspace where students design the space and take charge of their learning Whether you know it or not, your students are already making things outside of school. Journey to the student-centered makerspace. Will 3D Printing Change the World? 3D printing trends 2013. Three Emerging 3-D Printing Companies You Should Watch. Lately the tech world has focused its spotlight on industrial-scale 3-D printing company Stratasys’s acquisition of consumer-oriented MakerBot, which is sensible: Marketbot, already compared to '80s-era Apple, is a tech darling for its drive to simplify and its commitment to open source via its blueprint website Thingiverse.

Time will tell if Stratasys aims to renege on its hands-off vision of MakerBot’s future, but there are plenty of other companies to shed light on, many of them outside America. Most of the 3-D printing world can be found on the website of Wohlers Associates, a consulting firm that publishes an annual almanac listing the myriad service providers and machine dealers that sell printers from desktop models to Mammoth stereolithographers. Alternatively, the net community Additive 3-D features a chart of comparative 3-D printer models. 3D Systems Competitive consumer product: 3D Printed Edible Sugar Sculptures [Pics] In the future you could have your package delivered by a passerby on the way to work, or while running in the park, or waiting on a bench for your date.

The idea of a delivery service that relies on strangers and aggregated location data from Twitter proves to be remarkably effective. Eric Horvitz of Microsoft Research In Seattle calls the concept TwedEx. It could be compared to existing crowdsourced systems that hire strangers using the internet – with one key difference – this service can tap into frequently travelled routes and destinations. Once sent, each person in the chain would be told who to give the parcel to, along with where and when. Each person would receive a small incentive based on how long they’re willing to wait, how far they’re willing to go and other variables.

Simulations indicate it only takes 5 hours to get across the country using the current algorithm – even if they don’t originate from an airport. Open-source metal 3-D printer. Source[edit] Gerald C. 20 Amazing Creations You Can Make With 3D Printing. If you can print in 2D, can you print in 3D? How to build 3d printer. Building Your Own 3D Printer. Peachy Printer - How It Works. The Peachy Printer - The First $100 3D Printer & Scanner. Eventorbot! Open source 3D printer. by eventorbot. Eventorbot! Open source 3D printer. Simple with less materials. Mars 3D Images - NASA Jet Propulsion Laboratory. Advantages of 3d technology. 3D technologies are such revolution in our life that one cannot imagine how they have benefited the humanity. 824B63663E1C4DDD8F391DB7D0AADBE7.pdf (application/pdf Object)