Research. Design a Video Game. Teaching with Games. eSchool News 7 reasons why your school should teach robotics and game design. By Lynn Paul January 13th, 2015 One teacher describes the big impact robotics, coding, and STEM has had on her students I love every aspect of programming—the frustration, the creativity, everything. 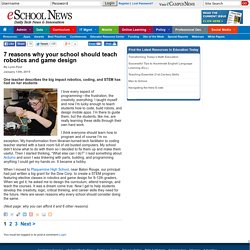 I taught myself and now I’m lucky enough to teach students how to code, build robots, and design mobile apps. I’m there to guide them, but the students, like me, are really learning these skills through their own hard work. I think everyone should learn how to program and of course I’m no exception. When I moved to Plaquemine High School, near Baton Rouge, our principal had just written a big grant for the Dow Corp. to create a STEM program featuring elective classes in robotics and game design for 9-12th graders. (Next page: why you can afford it and 6 other reasons) Minecraft is finally fixing its huge gender problem. Children play Minecraft at a Microsoft store in Bellevue, Wash. 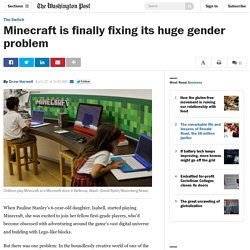 (David Ryder/Bloomberg News) When Pauline Stanley's 6-year-old daughter, Isabell, started playing Minecraft, she was excited to join her fellow first-grade players, who'd become obsessed with adventuring around the game's vast digital universe and building with Lego-like blocks. But there was one problem: In the boundlessly creative world of one of the most popular video games, the only character she could play was Steve, a bulky man with short, dark hair and a 5 o'clock shadow.

If she wanted to discover and build as a girl, she needed to pay extra. "Only having boys is telling everybody this is a boy game only," said Isabell, who knew girls in her class who had quit playing the game. It's a shortcoming that has long plagued the Minecraft franchise, which Microsoft bought last year for $2.5 billion after it sold more than 50 million copies and become a massively popular children's game and in-class teaching tool. #Gamergate—and what it means for gaming in education.

Game designers, MIT, professors weigh in on what educators need to know about the controversy, and how it applies to classroom practice Games, but especially games for education, need to allow for gender equality and freedom of expression, say gaming experts—two critical game design components needed in the fight against Gamergate’s revelation of misogyny in the gaming industry. 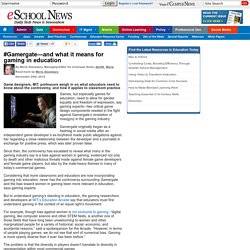 Gamergate originally began as a hashtag in social media after an independent game developer’s ex-boyfriend made public allegations against her regarding a close relationship between the developer and a journalist in exchange for positive press, which was later proven false. Since then, the controversy has escalated to reveal what many in the gaming industry say is a bias against women in gaming, evidenced not only by death and other malicious threats made against female game developers and female game players, but also by the male-heavy themes in many of today’s commercial games. 10 steps to promoting diversity in gaming. Game and instructional designers give advice for how educators should incorporate gaming. 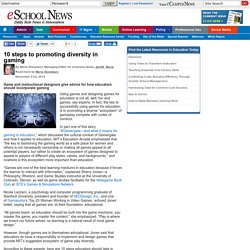 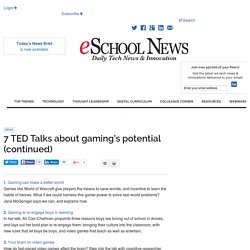 Gaming can make a better world Games like World of Warcraft give players the means to save worlds, and incentive to learn the habits of heroes. What if we could harness this gamer power to solve real-world problems? Jane McGonigal says we can, and explains how. 2. Gaming to re-engage boys in learning In her talk, Ali Carr-Chellman pinpoints three reasons boys are tuning out of school in droves, and lays out her bold plan to re-engage them: bringing their culture into the classroom, with new rules that let boys be boys, and video games that teach as well as entertain. 3. 4. 5. 6. 7 ways games reward the brain We’re bringing gameplay into more aspects of our lives, spending countless hours — and real money — exploring virtual worlds for imaginary treasures. 7.

10 computer science education resources and facts. Glpc_gamesforadigitalage1.pdf. Serious games for serious topics. Everyone wants to increase engagement and retention for learners, especially if the topic is an important one where compliance or business success is at stake. 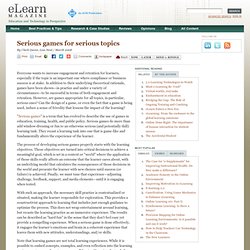 In addition to their underlying theoretical rationale, games have been shown—in practice and under a variety of circumstances—to be successful in terms of both engagement and retention. However, are games appropriate for all topics, in particular, serious ones? Can the design of a game, or even the fact that a game is being used, induce a sense of frivolity that lessens the impact of the learning?

"Serious games" is a term that has evolved to describe the use of games in education, training, health, and public policy. Serious games do more than add window-dressing or fun to an otherwise serious (and potentially dull) learning task. The process of developing serious games properly starts with the learning objectives. Note that learning games are not total learning experiences.