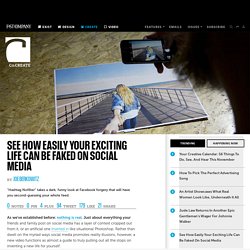 Just about everything your friends and family post on social media has a layer of context cropped out from it, or an artificial one inserted in like situational Photoshop. Rather than dwell on the myriad ways social media promotes reality illusions, however, a new video functions as almost a guide to truly pulling out all the stops on inventing a new life for yourself.

"Hashtag Nofilter" takes place within the digital existence of one Jenny Wanderlust. Of course, that name is a total fabrication, because, a.) Jenny is really a guy, and b.) The creepy, tinkling piano that accompanies Jenny's creating of these invalid updates provides a sinister vibe to the proceedings. 74% Aged 18-34 Delete Social Media Posts To Avoid Negative Career Impact [STUDY] A recent survey conducted by legal-information website FindLaw.com found that a considerable chunk of young adults are aware of, and act on, the potentially negative career impact of their social media activity. 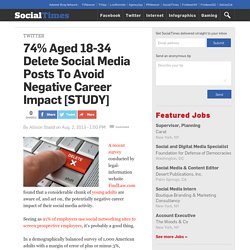 Seeing as 91% of employers use social networking sites to screen prospective employees, it’s probably a good thing. In a demographically balanced survey of 1,000 American adults with a margin of error of plus or minus 3%, FindLaw.com asked participants about their behavior surrounding Twitter, Facebook, Instagram, Pinterest, and Tumblr. 29% of those aged 18-34 said they have posted a photo, comment, or other personal info they fear could compromise their current or future job prospects. And a full 74% of 18- to 34-year-olds have removed something to avoid a negative reaction from an employer or prospective employer. That said, FindLaw.com did find that 82% of young users “pay at least some attention to their privacy settings,” and only 6% leave the default settings as they are. Inappropriate Social Media Posts & the Affect it can have on your Job - Blogging with Coastal - Transfer Paper, Sublimation, Heat Press, Vinyl and More!

Social media has become an integral part of modern society. 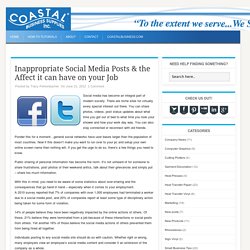 There are niche sites for virtually every special interest out there. Social Media – Your Online Reputation. Social media is a great asset and can help to advance your career and goals but it can also hold you back. 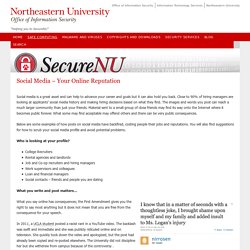 Close to 90% of hiring managers are looking at applicants’ social media history and making hiring decisions based on what they find. The images and words you post can reach a much larger community than just your friends. Material sent to a small group of close friends may find its way onto the Internet where it becomes public forever.

What some may find acceptable may offend others and there can be very public consequences. Endicott College - Observer Newspaper. Kristina McNamara Staff Writer Over the past two years, over 20 students have had their admissions withdrawn as a result of inappropriate Facebook posts. 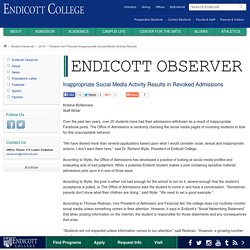 The Office of Admissions is randomly checking the social media pages of incoming students to look for this unacceptable behavior. “We have denied more than several applications based upon what I would consider racial, sexual and inappropriate actions. I don’t want them here,” said Dr. Richard Wylie, President of Endicott College. People still don't understand social media behavior affects jobs. When Social Sharing Goes Wrong: Regretting The Facebook Post : All Tech Considered. A model poses for photos next to a life-size makeshift Facebook browser in the Philippines. 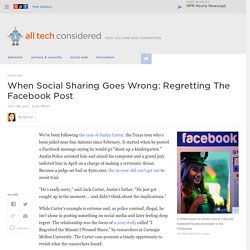 Top 10 Social Media Do's and Don'ts. Social media, including sites like Twitter and Facebook, can help you find a job and connect with people who can assist you with growing your career. 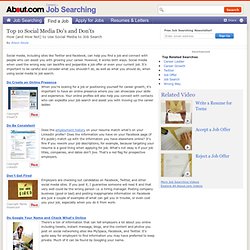 However, it works both ways. Social media when used the wrong way can backfire and jeopardize a job offer or even your current job. It’s important to be careful and consider what you shouldn’t do, as well as what you should do, when using social media to job search. Do Create an Online Presence Copyright VisualCV When you're looking for a job or positioning yourself for career growth, it's important to have an online presence where you can showcase your skills and experience. A Great Guide on Teaching Students about Digital Footprint. 10 Things Your Students Should Know About Their Digital Footprints.

Building a digital legacy is an issue I believe doesn’t garner enough attention in our personal and professional lives. 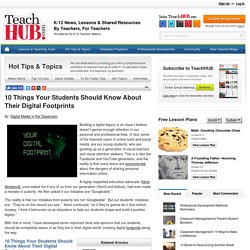 In fact, some of the heaviest users of online tools and social media, are our young students, who are growing up as a generation of visual learners and visual attention seekers. This is in fact the Facebook and YouTube generation, and the reality is that many teens are unconcerned about the dangers of sharing personal information online. A highly respected education advocate, Kevin Honeycutt, once asked me if any of us from our generation (GenX and before), had ever made a mistake in puberty. 10 Things Your Students Should Know About Their Digital Footprints. A Great Guide on Teaching Students about Digital Footprint. MediaSmarts. Social Networking Nightmares. Cyberspeak No Evil By Mike Simpson Story suggested by Tami Zeitler (Student member 2009), Central Washington University Want to get fired from your first teaching job? 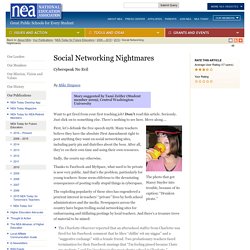 Don’t read this article. Seriously. The photo that got Stacey Snyder into trouble, because of its caption: “Drunken pirate.” First, let’s debunk the free speech myth: Many teachers believe they have the absolute First Amendment right to post anything they want on social networking sites, including party pix and diatribes about the boss. Sadly, the courts say otherwise. Thanks to Facebook and MySpace, what used to be private is now very public. Social Media Etiquette: 8.5 Bad Mistakes Good People Make. How An Online Reputation Can Hurt Your Job Hunt. 12 Things Students Should Never Do on Social Media. The last thing young people want is another set of rules. 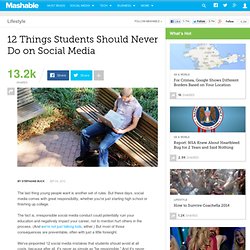 But these days, social media comes with great responsibility, whether you're just starting high school or finishing up college. The fact is, irresponsible social media conduct could potentially ruin your education and negatively impact your career, not to mention hurt others in the process. (And we're not just talking kids, either.) But most of those consequences are preventable, often with just a little foresight. We've pinpointed 12 social media mistakes that students should avoid at all costs, because after all, it's never as simple as "be responsible. " Dangers of over-sharing on social media. Introducing TV ad targeting on Twitter. Think Before You Share: New resource from Facebook and MediaSmarts. TipSheet_Think_Before_You_Share.pdf (application/pdf Object) eSchool News How to teach students about their digital footprint. By Laura Devaney, Managing Editor, @eSN_Laura Read more by Laura Devaney January 20th, 2014 Students must know about their digital footprint and the consequences of online actions Technology is an integral part of teaching and learning in today’s classrooms.

While educators are aware of privacy concerns surrounding students’ use of the internet and mobile devices, students don’t always have a good grasp of digital citizenship, and don’t necessarily know the consequences of their online actions. The average young person ages 8-18 consumes 7.5 hours of media per day outside of school. “Media is a huge part of kids’ lives, and we’re seeing amazing things in what it can do for learning,” said Kelly Mendoza, senior manager of professional development for Common Sense Media.

This is why it is especially important that students are aware of their digital footprint–the “trail” they leave online, made up of comments they make, images they post, and content they create. How to teach students about their digital footprint. What you say online could haunt you. What you say online could haunt you By Janet Kornblum and Mary Beth Marklein, USA TODAY College student Michael Guinn thought the photos he posted of himself dressed in drag would be seen only by friends. But he made a mistake. And when someone showed the photos on Facebook to administrators at John Brown University, a Christian college in Siloam Springs, Ark., it was "the last straw for them," says Guinn, 22, who is gay.

In January, he was kicked out of school, his virtual paper trail of musings about boyfriends and visits to clubs a clear sign to administrators that, despite repeated warnings, Guinn's activities were in violation of campus conduct codes stating that behavior must "affirm and honor Scripture. " 12 examples of people getting fired over Facebook. According to a 2009 study by Internet security firm Proofpoint, 8 percent of companies with more than 1,000 employees have fired someone for social media actions -- a figure that is double what was reported in 2008. Yet it probably comes as no surprise that Facebook firings are on the rise. Big Ideas in Education - 10 Reasons to Educate Elementary Students about Social Media. Laptop It is always interesting to me, to find out that more and more of our younger students are becoming involved with the Internet and Social Media.

Due to their developmental age, most students have some kind of difficulty with self-management throughout childhood. But, this is to be expected with children. Facebook Security - 5 Things You Should Never Post on Facebook. Updated December 20, 2014. Facebook has become the Google of social networks. If you're not updating your status right now, chances are that you are uploading photos or taking some sort of odd quiz. We post tons of intimate details about our lives that we normally wouldn't share with anyone. We think that as long as we make sure our privacy settings are set correctly that we are safe and snug within our circle of friends. The problem is that we never know who's really looking at our information. Our friend's account could have been hacked when they installed some rogue application, or their creepy uncle might be using their account because they forgot to log out.

ZeynepCanYouSeeMeNowBSTS.pdf (application/pdf Object) What You Post Online Can Get You Fired.