A Q&A with Thordis Elva and Tom Stranger. In October 2016, a group gathered in San Francisco for the TEDWomen 2016 conference, this year themed around the idea of time. 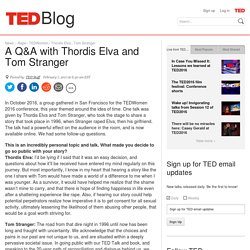 One talk was given by Thordis Elva and Tom Stranger, who took the stage to share a story that took place in 1996, when Stranger raped Elva, then his girlfriend. The talk had a powerful effect on the audience in the room, and is now available online. We had some follow-up questions. Universities need clearer guidelines on how deal with rape cases. New legal guidance for universities on how to deal with alleged student misconduct – including violence against women, harassment and hate crimes – has been issued by Universities UK, the umbrella organisation for sector leaders, and it’s a welcome step forward. 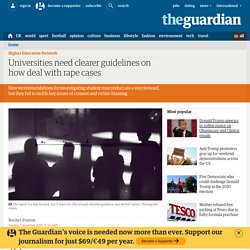 For the first time, it recognises that universities themselves can initiate disciplinary action for possible criminal offences and can also impose precautionary measures, such as the exclusion or suspension of an accused student. The problem is that the guidance applies to a multitude of crimes – and one size does not fit all. The issues that arise in relation to allegations of theft or criminal damage are very different from those that relate to sexual misconduct.

The definition of rape. YouTube. Trevor Copp and Jeff Fox: Ballroom dance that breaks gender roles. The Hope Projects - Home page. Michael Murphy: Architecture that's built to heal. Pico Iyer: The beauty of what we'll never know. Leslie Morgan Steiner: Why domestic violence victims don't leave. Finding a Voice for Survivors of Domestic Violence through Art. Who we are · Help for domestic violence perpetrators - Respect Phoneline · Respect. We are a team of skilled professionals offering advice, information and support to domestic violence perpetrators, as well as to their (ex) partners and frontline workers. 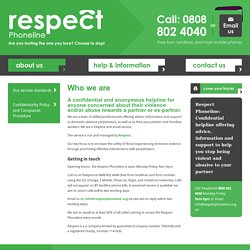 We are a helpline and email service. The service is run and managed by Respect. Our key focus is to increase the safety of those experiencing domestic violence through promoting effective interventions with perpetrators. Getting in touch Opening hours: the Respect Phoneline is open Monday-Friday 9am-5pm. Call us on freephone 0808 802 4040 (free from landlines and from mobiles using the O2, Orange, T Mobile, Three (3), Virgin, and Vodafone networks). Email us on info@respectphoneline.org.uk (we aim to reply within two working days). We aim to speak to at least 50% of all callers aiming to access the Respect Phoneline every month. Respect is a a company limited by guarantee (Company number 7582438) and a registered charity, number 1141636. Giving anonymity to sexual crime suspects won't bring justice. A group of high-profile men, including singer Sir Cliff Richard and broadcaster Paul Gambaccini, have launched a campaign to change the law so that people accused of sex crimes would not be named unless they are charged. 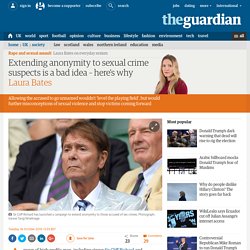 It is impossible to discuss such a campaign without setting it in the wider context of misconceptions about sexual violence and those who report it; misconceptions that have been particularly widely aired in the aftermath of the recent Ched Evans not-guilty verdict, which saw many make similar calls for anonymity on social media. Entwined with such demands is the public perception that false rape allegations are common. While there are some allegations which prove false, there are misconceptions about the extent of them. Esta Soler: How we turned the tide on domestic violence (Hint: the Polaroid helped) The Order of the White Feather. Studies and statistics around rape, sexual assault, and other forms of sexual violence vary widely. 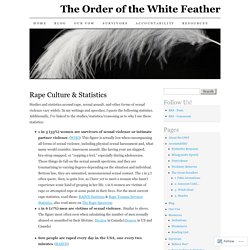 In my writings and speeches, I quote the following statistics. Additionally, I’ve linked to the studies/statistics/reasoning as to why I use these statistics: Sexual violence against women: Understanding cross-cultural intersections. Ione Wells: How we talk about sexual assault online. Domestic Abuse Statistics. Domestic abuse: Will affect 1 in 4 women and 1 in 6 men in their lifetimeLeads to, on average, two women being murdered each week and 30 men per yearAccounts for 16% of all violent crime (Source: Crime in England and Wales 04/05 report), however it is still the violent crime least likely to be reported to the policeHas more repeat victims than any other crime (on average there will have been 35 assaults before a victim calls the police)Is the single most quoted reason for becoming homeless (Shelter, 2002)In 2010 the Forced Marriage Unit responded to 1735 reports of possible Forced Marriages. 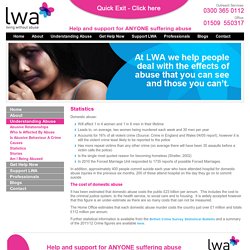 Simply, the systematic, repeated victimisation of women is being ignored. 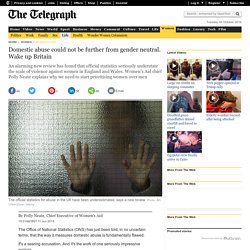 Statistics and Research. Rape & Sexual Violence Project. My Body Back - Rape and sexual assault support in London. How can women reclaim their bodies after sexual assault? “I couldn’t go to the doctor any more because I didn’t want to be touched.

I didn’t want to be in a crowd [and] it affected my relationships, but the biggest thing it affected was my perception of my body and my body image. I felt terrible.” Student nurse Pavan Amara, now 27, was raped as a teenager. Camille A. Brown: A visual history of social dance in 25 moves. Dance factory "Stop domestic violence" Melissa Walker: Art can heal PTSD's invisible wounds. Healing spiritual and emotional trauma through dance. By: Paula Graham | August 20, 2015 Dance Thru It, a new program developed by a St. 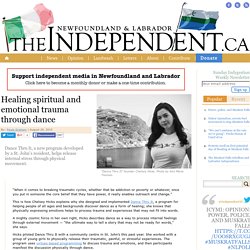 John’s resident, helps release internal stress through physical movement. “When it comes to breaking traumatic cycles, whether that be addiction or poverty or whatever, once you put in someone the core belief that they have power, it really enables outreach and change.”