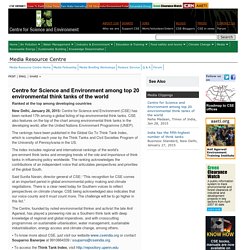 CSE also features on the top of the chart among environmental think tanks in the developing world, after the United Nations Environment Programme (UNEP). Altergaze: 3D printed VR Goggles for Smartphones by Liviu Berechet Antoni. Making an existing game or app compatible and ready to use with the Altergaze couldn't be easier. 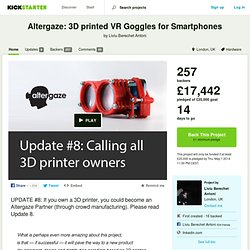 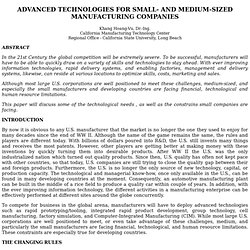 -Ing. California Manufacturing Technology Center Regional Office - California State University, Long Beach In the 21st Century the global competition will be extremely severe. To be successful, manufacturers will have to be able to quickly draw on a variety of skills and technologies to stay ahead. With ever improving information technologies, rapid delivery systems, and enabling factories, management and delivery systems, likewise, can reside at various locations to optimize skills, costs, marketing and sales.

Although most large U.S. corporations are well positioned to meet these challenges, medium-sized, and especially the small manufacturers and developing countries are facing financial, technological and human resource limitations. This paper will discuss some of the technological needs , as well as the constrains small companies are facing. Some of the changing market requirements are: Global competition is driving companies to improve their performance. How Much Can Data Improve Your Health? Digital trends from around the world. One English Town's Innovative Response To Sea Level Rise. 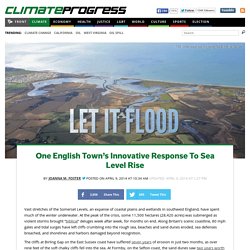 Foster Posted on Share this: "One English Town’s Innovative Response To Sea Level Rise" Share: Vast stretches of the Somerset Levels, an expanse of coastal plains and wetlands in southwest England, have spent much of the winter underwater. The cliffs at Birling Gap on the East Sussex coast have suffered seven years of erosion in just two months, as over nine feet of the soft chalky cliffs fell into the sea.

All along the coast of the U.K. and in other coastal communities around the world, the threat of sea level rise and more violent storms is forcing towns and governments to make difficult choices — build higher, build stronger, or retreat. The U.K.’s Environment Agency is experimenting with a kind of coordinated retreat for the hardest to defend coastal areas, a tactic referred to as managed coastal realignment. Getting Smart, Not Giving Up CREDIT: UK Environment Agency/Andrew Breiner The controversial plan? Early Returns. The 4 Components of a DIY Professional Development Toolkit. Education has always been a reflection of broader cultural values. 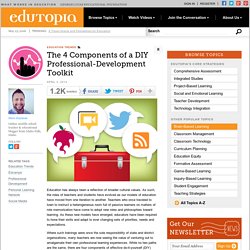 As such, the roles of teachers and students have evolved as our models of education have moved from one iteration to another. Teachers who once traveled to town to instruct a heterogeneous room full of passive learners on matters of rote memorization have come to adopt new roles and philosophies toward learning. As these new models have emerged, educators have been required to hone their skills and adapt to ever changing sets of priorities, needs and expectations. Where such trainings were once the sole responsibility of state and district organizations, many teachers are now seeing the value of venturing out to amalgamate their own professional learning experiences. While no two paths are the same, there are four components of effective do-it-yourself (DIY) professional development that all educational professionals should consider. 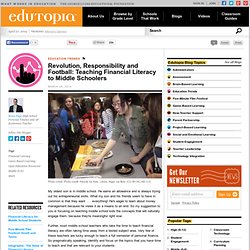 He earns an allowance and is always trying out his entrepreneurial skills. What my son and his friends seem to have in common is that they want . . . everything! He's eager to learn about money management because he views it as a means to an end. So my suggestion to you is focusing on teaching middle school kids the concepts that will naturally engage them, because they're meaningful right now. Further, most middle school teachers who take the time to teach financial literacy are often taking time away from a tested subject area.

Following are some lesson ideas and resources that you will find helpful. Gen i Revolution Developed for middle school and high school students, Gen i Revolution is an online game that gives your students the chance to learn important personal finance skills as they play and compete against fellow classmates. The game includes fifteen missions in which students attempt to help people in financial trouble. Hands on Banking.