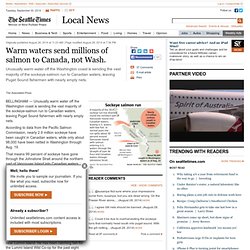 According to data from the Pacific Salmon Commission, nearly 2.9 million sockeye have been caught in Canadian waters, while only about 98,000 have been netted in Washington through Aug. 19. That means 99 percent of sockeye have gone through the Johnstone Strait around the northern part of Vancouver Island into Canadian waters. During a typical sockeye-salmon run, about 50 percent of the run goes around the south end of Vancouver Island through the Strait of Juan de Fuca, putting them in U.S. waters, The Bellingham Herald reported. This year’s diversion rate is unusual. The sockeye run is expected to continue for several more weeks, so U.S. fishermen like Pete Granger hope to salvage what they can.

Yes, you can now go farm-to-table without leaving the airport - Urbanful. The Nickel Tour: An organic farm in O’Hare Airport could bring some freshness to your next connection through Chicago. 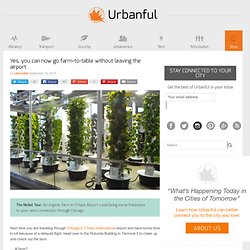 Next time you are traveling through Chicago’s O’Hare International airport and have some time to kill because of a delayed flight, head over to the Rotunda Building in Terminal 3 to cheer up and check out the farm. … A farm? Yes, that’s right: ORD has its own produce garden. In fact, it’s world’s first, and currently only, aeroponic garden in an airport. “The produce grown in the garden is used by restaurants at O’Hare, creating a true “farm-to-table” experience,” says Karen Pride, the director of media relations for the Chicago Department of Aviation.

So, what exactly is aeroponic gardening? Aeroponics is becoming increasingly popular around the world as farmers must compete with developers for limited open space. LED lights could help us take back the night skies - Urbanful. Two-thirds of the world’s population, including basically everyone in America and continental Europe, no longer experience starry nights. 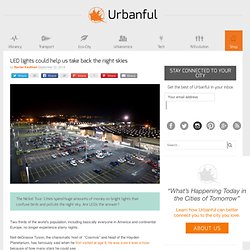 Neil deGrasse Tyson, the charismatic host of “Cosmos” and head of the Hayden Planetarium, has famously said when he first visited at age 9, he was sure it was a hoax because of how many stars he could see. It’s not that the star population is dropping—it’s just obscured by light pollution, namely, the 60 million streetlights in the U.S. alone. Millions are installed each year, projects for which cities are paying out the nose: 40 percent of a city’s electric bill goes to streetlights, and half that light is wasted, shining brightly onto empty pavement.

But there could be hope: LED streetlight retrofits are a solution that could bring in savings and be better for the skies, too. Raised bike lanes: Coming to a city near you - Urbanful. The Nickel Tour: Cities from Copenhagen to Missoula, Mont. use raised bike lanes to protect cyclists; now San Francisco is getting in on the trend. 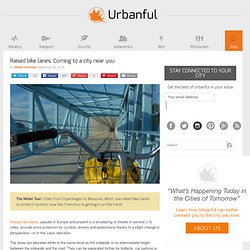 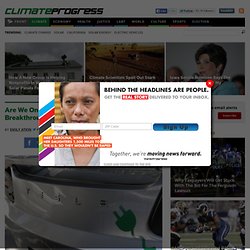 " An electric plug decal is seen on the back of a Tesla electric car. CREDIT: AP Photo/Mel Evans Electric vehicles are cool. That could soon change, though, because investment pundits think that Tesla Motors is on the verge of achieving something big: A battery cheap enough to make electric vehicles cost-competitive with conventional cars. There are a few reasons for this, Sparks writes. Apple's new "spaceship" headquarters: revolutionary ... or the worst office ever? - Urbanful.

The Nickel Tour: Apple’s “spaceship” touts some impressive sustainability initiatives, but if it does so at the expense of walkability, who wins? 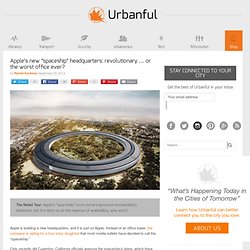 Apple is building a new headquarters, and it is just so Apple. Instead of an office tower, the company is opting for a four-story doughnut that most media outlets have decided to call the “spaceship.” Seattle Recognized as the Nation’s Most Sustainable City - Greenspace. STAR Communities announced today that Seattle has been awarded a 5-STAR Community Rating for national leadership in sustainability. 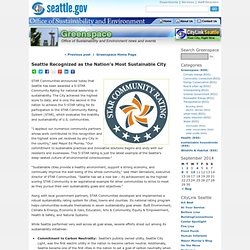 The City achieved the highest score to date, and is only the second in the nation to achieve the 5-STAR rating for its participation in the STAR Community Rating System (STAR), which evaluates the livability and sustainability of U.S. communities. “I applaud our numerous community partners whose work contributed to this recognition and the highest score yet received by any City in the country,” said Mayor Ed Murray. “Our commitment to sustainable practices and innovative solutions begins and ends with our residents and businesses.