Glauber Kotaki's Blog - The Art of Rogue Legacy, or "why less is more" The following blog post, unless otherwise noted, was written by a member of Gamasutra’s community. 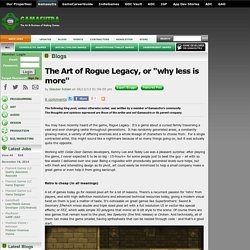 The thoughts and opinions expressed are those of the writer and not Gamasutra or its parent company. You may have recently heard of the game, Rogue Legacy. It’s a game about a cursed family traversing a vast and ever changing castle throughout generations. It has randomly generated areas, a constantly growing manor, a variety of differing enemies and a whole lineage of characters to choose from. For a single contracted artist, this might sound like a nightmare because of so many things going on, but it was actually quite the opposite. Working with Cellar Door Games developers, Kenny Lee and Teddy Lee was a pleasant surprise: after playing the game, I never expected it to be so big - 15-hours+ for some people just to beat the guy – all with so few assets I delivered over one year. Retro is cheap (in all meanings) The Art Of Braid: Creating A Visual Identity For An Unusual Game.

The Art Of Braid: Creating A Visual Identity For An Unusual Game By David Hellman [In this fascinating deconstruction, artist David Hellman explains his collaboration with Jonathan Blow to create the evocative, painterly art for acclaimed downloadable game Braid, which debuts tomorrow on Xbox Live Arcade.] 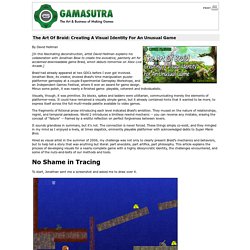 Braid had already appeared at two GDCs before I ever got involved. Indie Game Development: An Art of its Own. In one sense, video games came into existence when they were first created.On the contrary, video games as a cultural revolution did not share the same starting point as their first inception, but originated when they first gained status in the community. 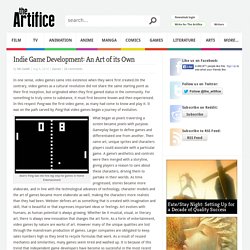 For something to truly come to substance, it must first become known and then experienced. In this respect Pong was the first video game, as many had come to know and play it. It was on the path carved by Pong that video games began a journey of evolution. Atari’s Pong was the first big step for games in Home Entertainment. Nine Paths To Indie Game Greatness. [The rise of the independent gaming movement is a vital one, and in this in-depth article, game development veteran Marsh showcases nine methods that indies are using to develop games with fewer resources.] 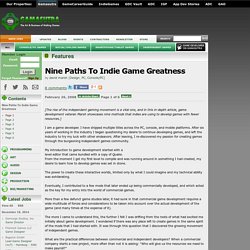 I am a game developer. I have shipped multiple titles across the PC, console, and mobile platforms. After six years of working in the industry I began questioning my desire to continue developing games, and left the industry to try my luck with other endeavors. After leaving, I re-discovered my passion for creating games through the burgeoning independent games community. My introduction to game development started with a level editor that came bundled with a copy of Quake. Q&A: Independent Game Creators On Importance Of Indie Movement. The Rise of the Indie Developer - GameSpot. By: , GameSpot AU - Posted on February 14, 2011 Two years ago, Swedish games programmer Markus Persson walked out of the development studio where he'd spent the last four years of his life making free-to-play flash games, went back to his apartment, and created Minecraft. 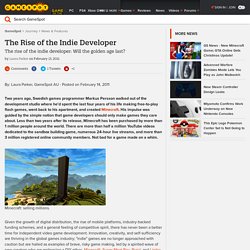 His impulse was guided by the simple notion that game developers should only make games they care about. Less than two years after its release, Minecraft has been purchased by more than 1 million people around the world. There are more than half a million YouTube videos dedicated to the sandbox building game, numerous 24-hour live streams, and more than 3 million registered online community members. The Basic Marketing Plan For Indie Games. Introduction A marketing plan might sound something awfully hard to do for a game developer, but to briefly put it: the marketing plan is your flightplan on how to get your game to your players. 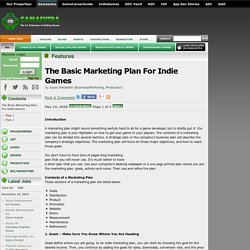 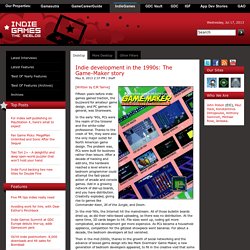 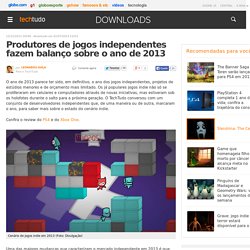 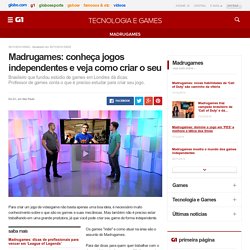 What is Indie? Back in the early '90s, the definition of 'indie' music went under a transformation. 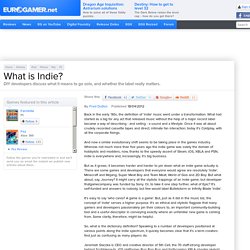 What had started as a tag for any act that released music without the help of a major record label became a way of describing - and selling - a sound and a lifestyle. Once it was all about crudely recorded cassette tapes and direct, intimate fan interaction; today it's Coldplay, with all the corporate fixings. And now a similar evolutionary shift seems to be taking place in the games industry. Whereas not much more than five years ago the indie game was solely the domain of hobbyists and modders, now, thanks to the speedy ascent of Steam, iOS, XBLA and PSN, indie is everywhere and, increasingly, it's big business. But as it grows, it becomes harder and harder to pin down what an indie game actually is.

It's easy to say 'who cares? So, what is the dictionary definition? "I'll say one thing: we'll never sell our company and we have no investors. The Year of the Game » The Kickstarter Blog. Last week, Reaper Miniature Bones and Planetary Annihilation became the 10th and 11th Kickstarter projects to cross $1 million in funding. Both projects belong to the Games category. In fact, seven of the eleven projects that have crossed $1 million this year are games, and an eighth is a comic about a game. This has been the year of the game on Kickstarter. In 2012, more dollars have been pledged to Games projects than to any other category. Kickstarter Stats. Total dollars pledged to Kickstarter projects Successfully funded projects This page is automatically updated at least once a day with the raw data behind Kickstarter. Metrics include funding success rates, amount pledged, and the performance of successfully and unsuccessfully funded projects.

Statistics are available for the site overall as well as each of the 15 project categories. Check out our blog for more on Kickstarter’s data. Successfully Funded Projects Most successfully funded projects raise less than $10,000, but a growing number have reached six and even seven figures. Unsuccessfully Funded Projects Funding on Kickstarter is all-or-nothing in more ways than one. The 'Indie' Delusion: The Gaming Category that Doesn't Exist. Share. How the invasion of 'Indie' is stupefying video game audiences. By Michael ThomsenThe idea that a person or thing can be 'indie' is still emerging in the world of video games, but in film and music it's a wheezing stereotype long since discredited. The illusion of independence has its most direct roots in cinema, where it overlapped with the idea of film as art in the 50s and 60s.

What is an "Independent" or "Indie" Game? Independently-developed video games, more often known as "indie games," are games that are put together without a publisher's assistance or financial support. Many of the earliest video games were developed independently via small teams containing just a few warm bodies (sometimes even just one!). As the pastime's popularity spread, the size and scope of the games themselves grew accordingly. Developers who had a vision for a video game approached publishers to handle marketing, funding and distribution. Indiegames.com - showcasing the best in independent games.

Driven by digital distribution, the concept of independent video game development has spawned an "indie" movement.[1] The increase in popularity of independent games has allowed increased distribution on popular gaming platforms such as Xbox Live, PlayStation Network, Steam, and Nintendo eShop. History[edit] The origins of indie video games may be traced back to the 1970s, when there was virtually no established computer gaming industry. As video game firms developed they employed more programmers. I will point out the sad truth. The worst days [for game development] were the cartridge days for the NES.