091003. Untitled. Ancient History and Archaeology.com - Roman Domestic Slavery. Slaves played an important role in the running of the Roman house. 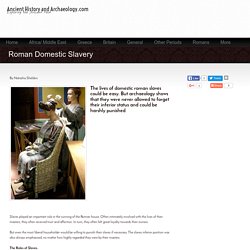 Often intimately involved with the lives of their masters, they often received trust and affection. In turn, they often felt great loyalty towards their owners. But even the most liberal householder would be willing to punish their slaves if necessary. The slaves inferior position was also always emphasised, no matter how highly regarded they were by their masters. Bibliography. Bibliography Raaflaub, Kurt A., and Tim Cornell. 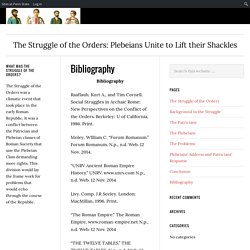 Social Struggles in Archaic Rome: New Perspectives on the Conflict of the Orders. Berkeley: U of California, 1986. The Roman Empire: in the First Century. The Roman Empire. Social Order. Slaves & Freemen. Slavery in ancient Rome differed from its modern forms in that it was not based on race. 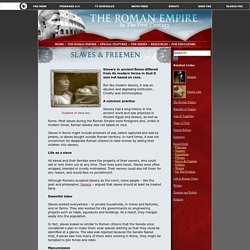 But like modern slavery, it was an abusive and degrading institution. Cruelty was commonplace. A common practice. The Influence of Ancient Greek Architecture. WAJ Vol3 2012 Rigby The Idea of Evolution. Organization of Computer Systems: Processor & Datapath. Reading Assignments and Exercises This section is organized as follows: 4.1. 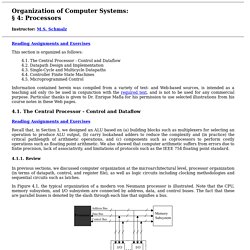 The Central Processor - Control and Dataflow 4.2. Datapath Design and Implementation 4.3. Single-Cycle and Multicycle Datapaths 4.4. Carthage - Engineering an Empire - Full Documentary. Untitled. Datapath3. Steps to Execute an Instruction. Design of a Simple Computer. How The Computer Works: The CPU and Memory. Figure 1 shows the parts of a computer: This part of the reading will examine the CPU, Buses, Controllers, and Main Memory. 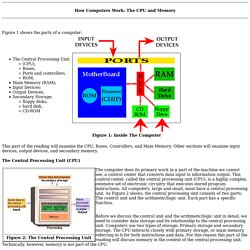 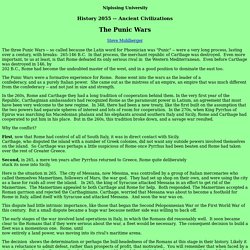 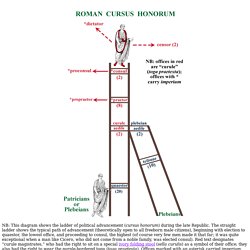 The straight ladder shows the typical path of advancement (theoretically open to all freeborn male citizens), beginning with election to quaestor, the lowest office, and proceeding to consul, the highest (of course very few men made it that far; it was quite exceptional when a man like Cicero, who did not come from a noble family, was elected consul). Red text designates “curule magistrates,” who had the right to sit on a special ivory folding stool (sella curulis) as a symbol of their office; they also had the right to wear the purple-bordered toga (toga praetexta). Offices marked with an asterisk carried imperium, the highest political authority, which included the right to command an army, to interpret and carry out the law, and to pass sentences of death. 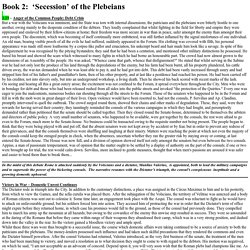 They loudly complained that whilst fighting in the field for liberty and empire they were oppressed and enslaved by their fellow-citizens at home; their freedom was more secure in war than in peace, safer amongst the enemy than amongst their own people. The discontent, which was becoming of itself continually more embittered, was still further inflamed by the signal misfortunes of one individual. The Roman Empire: in the First Century. The Roman Empire. Social Order. Plebians.

D-type Flip Flop Counter or Delay Flip-flop. But in order to prevent this from happening an inverter can be connected between the “SET” and the “RESET” inputs to produce another type of flip flop circuit known as a Data Latch, Delay flip flop, D-type Bistable, D-type Flip Flop or just simply a D Flip Flop as it is more generally called. 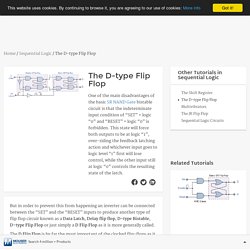 The D Flip Flop is by far the most important of the clocked flip-flops as it ensures that ensures that inputs S and R are never equal to one at the same time. The D-type flip flop are constructed from a gated SR flip-flop with an inverter added between the S and the R inputs to allow for a single D (data) input. D Flip-Flops. KKHSOU. The term synchronous refers to the events that have a fixed time relationship with each other. 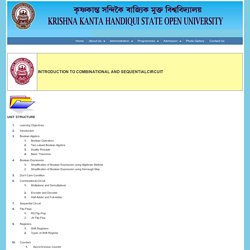 With respect to counter operation, synchronous means that all the flip-flops in the counter are clocked at teh same time by a common clock pulse. Outlines of Roman History, Chapter 13. The Sovereign Roman State, I. Dictionary of Greek and Roman Geography (1854), LATIUM. The name of Latium was applied at different periods in a very different extent and signification.

Originally, as already pointed out, it meant the land of the Latini; and as long as that people retained their independent national existence, the name of Latium could only be applied to the territory possessed by them, exclusive of that of the Hernici, Aequians, Volscians, &c., who were at that period independent and often hostile nations. World History Timeline History of Ancient Rome: the Republic. Roman army. It can be said that the Roman army was born with Rome itself, for the founders of the city had to take up arms at once to defend themselves against the attacks of the neighboring Latin peoples. Throughout the centuries, the Romans owed their victories over so many peoples, some of whom were of great military strength, to the superiority of their arms and military organization. In Rome it was the duty of every male citizen to provide himself with weapons and to serve in the army at his own expense.

The very poorest were excused from this obligation but, in cases of great need, they too were armed at the expense of the State. Citizens between the ages of 17 and 45, called juniores (young men), formed the regular army, while those from 46 to 60, called seniores (elders), formed a kind of territorial force, which was employed only behind the lines. To prove that they could stand up to fatigue, the young men used to practice with much heavier weapons than those they would use in war. Imgur: The most awesome images on the Internet. World History Timeline History of Ancient Rome: the Republic. Computer Organization and Design: The Hardware/Software Interface - David A. Patterson, John L. Hennessy. Overflow Detection. Arithmetic operations have a potential to run into a condition known as overflow.