Cultural and Societal Influences on Adolescent Development. The Science of Adolescent Risk-Taking: Workshop Report. Media's Influence on Social Norms and Identity Development of Youth - Applied Social Psychology. We are often bombarded with news stories showing the horrors of how media is shaping today's youth. 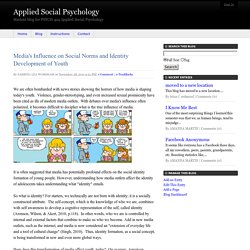 Violence, gender-stereotyping, and even increased sexual promiscuity have been cited as ills of modern media outlets. With debates over media's influence often polarized, it becomes difficult to decipher what is the true influence of media. It is often suggested that media has potentially profound effects on the social identity formation of young people. However, understanding how media outlets affect the identity of adolescents takes understanding what "identity" entails.

So what is identity? How does this transformation of media affect youth, today? One of the strongest routes by which media appears to influence attitude-change is through persuasion. Another interesting fact is that, whether consciously aware of what is being displayed or not, media plays a substantial role in influencing consumption patterns and lifestyle. Positive Identity as a Positive Youth Development Construct: A Conceptual Review. ACT for Youth - Adolescence - Adolescent Identity Development.

The development of a strong and stable sense of self is widely considered to be one of the central tasks of adolescence [1]. 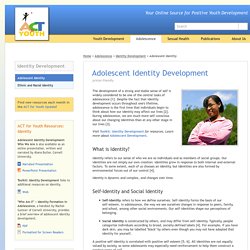 Despite the fact that identity development occurs throughout one's lifetime, adolescence is the first time that individuals begin to think about how our identity may affect our lives [2]. During adolescence, we are much more self-conscious about our changing identities than at any other stage in our lives [3]. Visit Toolkit: Identity Development for resources. Learn more about Adolescent Development. Social Development of Adolescents: Identity.

The Influence of Environment - The Science of Adolescent Risk-Taking: Workshop Report - NCBI Bookshelf. Youth Development and Neighborhood Influences: Challenges and Opportunities. Differences in Developmental Pathways One research study on youth has identified three key developmental tasks that characterize the period between early and late adolescence, ages 12 to 19 (Connell et al., 1995): learning to be productive, learning to connect, and learning to navigate. 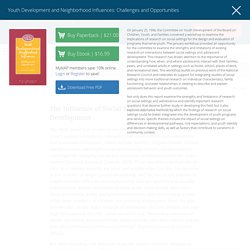 The participants indicated that, although these three tasks may be central to successful adolescent development, variations in experience and circumstances can influence their timing, sequencing, and relative importance at any given time. Participants observed that prevailing views of adolescent development and conceptual frameworks derived from white, middle-class adolescent populations may not reflect the experiences or unique challenges that confront youth who are influenced by other cultural traditions or by disadvantaged conditions.

The Impact of Settings on Role Expectations. An Error Occurred Setting Your User Cookie. Identity Development - Aspects of Identity - Adolescents, Adolescence, Self, and Career - JRank Articles. The process of developing an identity begins with the infant's discovery of self, continues throughout childhood, and becomes the focus of adolescence. 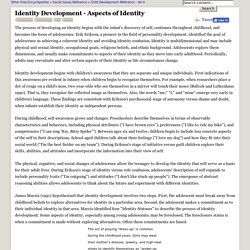 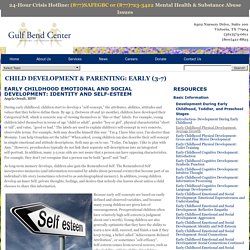 By age 3, (between 18 and 30 months), children have developed their Categorical Self, which is concrete way of viewing themselves in "this or that" labels. For example, young children label themselves in terms of age "child or adult", gender "boy or girl", physical characteristics "short or tall", and value, "good or bad. " The labels are used to explain children's self-concept in very concrete, observable terms. For example, Seth may describe himself this way: "I'm 4. As long-term memory develops, children also gain the Remembered Self. Because early self-concepts are based on easily defined and observed variables, and because many young children are given lots of encouragement, Preoperational children often have relatively high self-esteem (a judgment about one's worth).

Develop. 6.3 Adolescence: Developing Independence and Identity. Learning Objectives Summarize the physical and cognitive changes that occur for boys and girls during adolescence.Explain how adolescents develop a sense of morality and of self-identity. 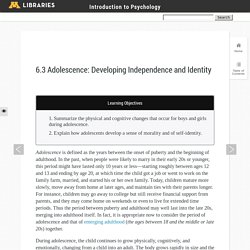 Adolescence is defined as the years between the onset of puberty and the beginning of adulthood. In the past, when people were likely to marry in their early 20s or younger, this period might have lasted only 10 years or less—starting roughly between ages 12 and 13 and ending by age 20, at which time the child got a job or went to work on the family farm, married, and started his or her own family.

Today, children mature more slowly, move away from home at later ages, and maintain ties with their parents longer. For instance, children may go away to college but still receive financial support from parents, and they may come home on weekends or even to live for extended time periods. Physical Changes in Adolescence Figure 6.9 Sex Characteristics Cognitive Development in Adolescence Figure 6.10 Key Takeaways. Identity formation and social cognition.

Links of Adolescents Identity Development and Relationship with Peers: A Systematic Literature Review.