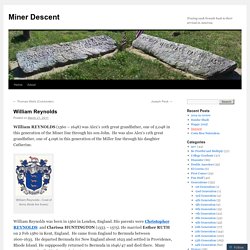 He was also Alex’s 11th great grandfather, one of 4,096 in this generation of the Miller line through his daughter Catherine. William Reynolds - Coat of Arms (Note the foxes) William Reynolds was born in 1560 in London, England. His parents were Christopher REYNOLDS and Clarissa HUNTINGTON (1533 – 1575). He married Esther RUTH on 2 Feb 1580 in Kent, England. There was another William Reynolds who lived in Bermuda who married Mary Smith. 1629, June; Mary dau. of William Reynolds. 1631, Feb: Elizabeth dau. Esther Ruth (Roth) was born in 1560 in England. Children of William and Esther: William Reynolds, the immigrant ancestor, settled in Providence, Rhode Island. 20 Aug 1637 – He and certain others were to pay two shillings six pence apiece for ground that they had granted to them, and he and twelve others signed the following compact: Children 1. 3. 4. 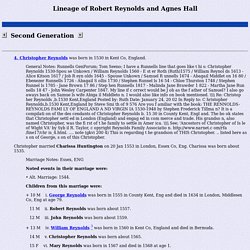 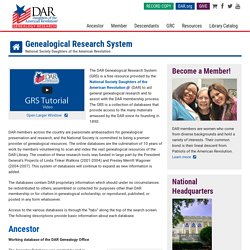 The GRS is a collection of databases that provide access to the many materials amassed by the DAR since its founding in 1890. DAR members across the country are passionate ambassadors for genealogical preservation and research, and the National Society is committed to being a premier provider of genealogical resources. The online databases are the culmination of 10 years of work by members volunteering to scan and index the vast genealogical resources of the DAR Library. The creation of these research tools was funded in large part by the President General's Projects of Linda Tinker Watkins (2001-2004) and Presley Merritt Wagoner (2004-2007).

Access to the various databases is through the “tabs” along the top of the search screen. Ancestor. Vital Records of Andover, Massachusetts, to the End of the Year 1849 ... - Andover (Mass.) Deny.aspx?sub=281474977006081&dbid=4714&url= Person Details for William Reynolds in entry for Rebekah Reynolds, "Massachusetts, Births and Christenings, 1639-1915"