Developer, librarian, engineer, feminist, maker, bird nerd. I think there are two keys to why I was a successful electrical engineer, when I did not (initially) succeed as a computer scientist—despite being more interested in the latter, to begin with, and despite wanting to pursue the latter now. 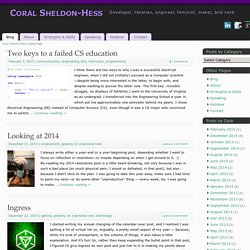 The first key: invisible struggle, no displays of fallibility I went to the University of Virginia as an undergrad. I transferred into the Engineering School a year in, which put me approximately one semester behind my peers. I chose Electrical Engineering (EE) instead of Computer Science (CS), even though it was a CS major who convinced me to switch. … Continue reading. UX, consideration, and a CMMI-based model - Coral Sheldon-Hess. I have a theory: user experience (UX) thinking (which I’ll also call user-centricity) is an attitude that follows you into daily life. 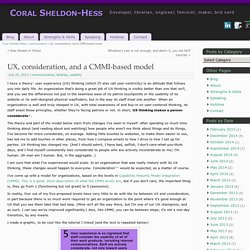 An organization that’s doing a great job of UX thinking is visibly better than one that isn’t, and you see the differences not just in the seamless ease of its patron touchpoints or the usability of its website or its well-designed physical wayfinders, but in the way its staff treat one another. When an organization is well and truly steeped in UX, with total awareness of and buy-in on user-centered thinking, its staff enact those principles, whether they’re facing patrons or not.

In short, UX thinking makes a person considerate*. The theory and part of the model below stem from changes I’ve seen in myself: after spending so much time thinking about (and reading about and watching) how people who aren’t me think about things and do things, I’ve become far more considerate, on average. Behavioral Mapping Project: Strozier Library - First Floor by Sarah Kibler on Prezi.

Design Research Techniques. Ethnography for impact: a new way of exploring user experience in lib… Links for V&R Jisc session - Google Docs. Once an Anthropologist Always an Anthropologist. Stealth Librarianship: Creating Meaningful Connections Through User... “I’ve got a bad feeling about this…” Or why we changed our user str... The Unquiet Librarian.

The mongoose librarian. A blog exploring ethnography, usability and user experience in libraries. The Anthropologist in the Stacks. Evaluating digital services: a Visitors and Residents approach. This infoKit contains advice on evaluating the services you offer to your users. 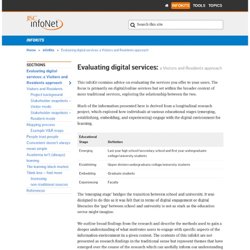 The focus is primarily on digital/online services but set within the broader context of more traditional services, exploring the relationship between the two. Much of the information presented here is derived from a longitudinal research project, which explored how individuals at various educational stages (emerging, establishing, embedding, and experiencing) engage with the digital environment for learning. The ‘emerging stage’ bridges the transition between school and university. It was designed to do this as it was felt that in terms of digital engagement or digital literacies the ‘gap’ between school and university is not as stark as the education sector might imagine. We outline broad findings from the research and describe the methods used to gain a deeper understanding of what motivates users to engage with specific aspects of the information environment in a given context.

Challenges of web residency case study – our vistor and residents journey and case study #HEAVandR. Rule Number One: A Library Blog. The Power of Personas. By Brad Colbow & Indi Young For more insights into Personas: Read Mental Models: Aligning Design Strategy with Human Behavior by Indi Young (psst: use the code UXMAS to save 15% off your order, thanks to Rosenfeld Media). 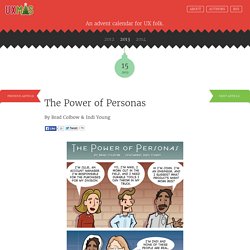 Read Kim Goodwin's book Designing for the Digital Age: How to Create Human-Centered Products and Services. Kim has done a great deal of work advancing the concept of Personas. Read Alan Cooper's seminal book, The Inmates are Running the Asylum. Following is a transcription of the comic: I’m Julie, an account manager. Yo, I’m Mike, I work out in the field, and I need durable tools I can throw in my truck. Hi I’m John. I’m Indi and none of these people are real. They are called personas* and are used in website design and development. Personas are created to understand the needs of a group of users. They describe how people try to accomplish things in their daily lives. Mike needs durable tools that he can throw in the back of his truck. And throw out what they aren't. NOPE!