Java basics: a tutorial for beginners. If you have ever wanted to write your own Android app, for fun or for profit, you are probably going to need to do some programming. 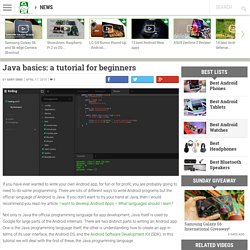 There are lots of different ways to write Android programs but the official language of Android is Java. If you don’t want to try your hand at Java, then I would recommend you read my article: I want to develop Android Apps – What languages should I learn? Not only is Java the official programming language for app development, Java itself is used by Google for large parts of the Android internals. There are two distinct parts to writing an Android app. One is the Java programming language itself, the other is understanding how to create an app in terms of its user interface, the Android OS, and the Android Software Development Kit (SDK). The Linux socket, TCP/IP protocols and client-server network fundamental concepts and model background story. From the Application layer of a computer at company A go downward the layer until the Physical (medium such as Cat 5 cable) layer, then exit Network A through the Network (router) layer in the middle of the diagram.After traveling through the carrier, reaches at the Network (router) layer of company B, travels through the Physical layer, goes upward until reaching at the Application layer of the computer at company B. 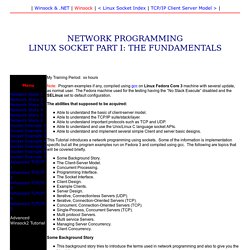 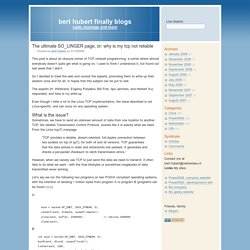 I used to think I understood it, but found out last week that I didn’t. So I decided to trawl the web and consult the experts, promising them to write up their wisdom once and for all, in hopes that this subject can be put to rest. The experts (H. Even though I refer a lot to the Linux TCP implementation, the issue described is not Linux-specific, and can occur on any operating system. What is the issue? Which Programming Language Should I Learn First? CCIE Practical Studies: Configuring Route-Maps and Policy-based Routing > Route Map Overview. 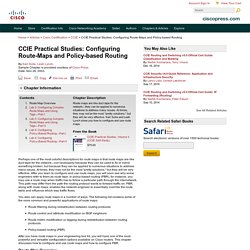 At times, they may not be the most "pretty solutions," but they will be very effective. After you learn to configure and use route maps, you will soon see why some engineers refer to them as route tape. In policy-based routing (PBR), for instance, you may use a route map when traffic has to follow a particular path through the internetwork. This path may differ from the path the routing protocol wants to forward traffic on.

PBR, along with route maps, enables the network engineer to essentially override the route table and influence which way traffic flows. How I Hacked Ola, India's Biggest Startup. Blog, Integrating GNS3 and VirtualBox - DigiNinja. Having come from a development background rather than a sysadmin one, my knowledge of layer 2 is not as good as I'd like it to be so I've decided to do something about it.

I've always been interested in VLANs and the idea of bypassing them so thought that would be a good place to start. Having two small children at home means having a bunch of physical routers and switches sitting about in my home office wasn't really an option as they tend to be noisy things so I set off on the quest to virtualize everything so it would be nice and quiet, easy to snapshot and portable. When I mentioned this on Twitter and asked for advice there were two schools of thought: Should be possible, no real reason why notWon't work, you can only virtualize routers and GNS3 doesn't handle switching well.

How to Configure HSRP on a Cisco Router - Router Freak. Hot Standby Routing Protocol or HSRP, is a Cisco proprietary protocol that allows two or more routers to work together to represent a single IP address for a particular network. 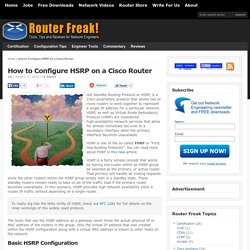 Hijacking HSRP. First hop redundancy protocols including HSRP, VRRP, and GLBP can be used to emulate a virtual router on a subnet, typically hosts' default gateway. 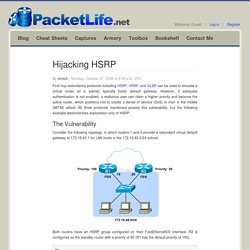 However, if adequate authentication is not enabled, a malicious user can claim a higher priority and become the active router, which positions him to create a denial of service (DoS) or man in the middle (MITM) attack. All three protocols mentioned posess this vulnerability, but the following example demonstrates exploitation only of HSRP. The Vulnerability Consider the following topology, in which routers 1 and 2 provide a redundant virtual default gateway at 172.16.40.1 for LAN hosts in the 172.16.40.0/24 subnet. Both routers have an HSRP group configured on their FastEthernet0/0 interface. 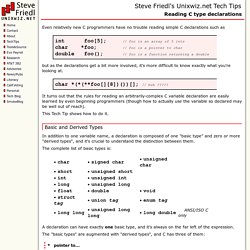 It turns out that the rules for reading an arbitrarily-complex C variable declaration are easily learned by even beginning programmers (though how to actually use the variable so declared may be well out of reach). This Tech Tip shows how to do it. In addition to one variable name, a declaration is composed of one "basic type" and zero or more "derived types", and it's crucial to understand the distinction between them. The complete list of basic types is: A declaration can have exactly one basic type, and it's always on the far left of the expression.

The "basic types" are augmented with "derived types", and C has three of them: E=±mc²=Thé Ðëòxÿríßøñµçlëìç HÿÞêrdïmèñsîøñ. Learn Interesting Facts Every Day.