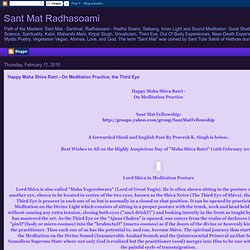 He is often shown sitting in the posture of a meditating Yogi with another eye, shown to be located in centre of the two eyes, known as the Shiva Netra (The Third Eye of Shiva), the Third Eye, etc. In fact, this Third Eye is present in each one of us but is normally in a closed or shut position. It can be opened by practicing "DrishTi Yoga" or the Meditation on the Divine Light which consists of sitting in a proper posture with the trunk, neck and head held in a vertical straight line without causing any extra tension, closing both eyes ("amA drishTi") and looking intently in the front as taught by an adept Guru who himself has mastered the art.

. - English Translation by Pravesh K. 1. 2. 3. 4. 5. The Ancient Forms of Siva in Vedic, Dravidian and Tribal Traditions. By Jayaram V Siva (Shiva, Sivam) is one of the most ancient gods of Hinduism, known by many names, forms and aspects, some of which have been lost to us. 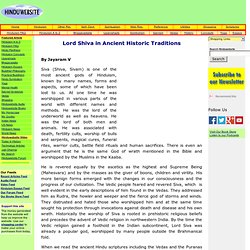 At one time he was worshipped in various parts of the world with different names and methods. Shiva Tandava Stotram ( POWERFUL ) Shiva Tandava Stotram. Shiva Manas Pooja. Daridraya Dukha Dahana Shiva Stotram. Sati and Shiva: Attachment to the Unattached. An old saying asks one never to go where one gets too much respect. This is because getting too much attention is a sure recipe for developing a temperament accustomed to throwing tantrums at the slightest perceived disrespect. Therefore, one should never cultivate the habit of receiving too much respect or honor. Not following this precept once led to a very unfortunate sequence of events, and finally it took the might of Lord Vishnu and Shiva to set things on their right course.

It so transpired that in a gathering of distinguished personalities, including Lord Shiva, Daksha, Shiva's father in law, made a splendorous entry shining brilliantly like a second sun. The assembly immediately rose to its feet, all except his son in law. Now, Daksha was a great king of kings, much used to getting honor and respect wherever he went. "Listen to me, O' distinguished people. Thus did Daksha sputter venom. This cursing and counter-cursing made Lord Shiva disconsolate and he left the gathering. 1). Links to pages on Saivism. Shiva Worship. How does one worship Shiva? 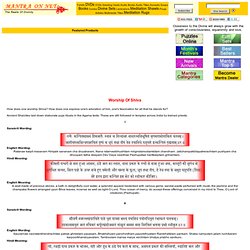 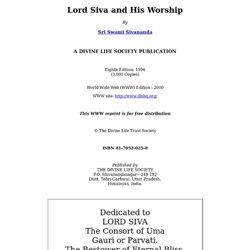 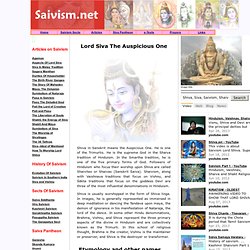 He is one of the Trimurtis. Devirahasya Tantra. As water merges in water, as fire merges in fire, as (the void within) a broken pot dissolves in aether, and as air merges with air, so too the brahmana and brahmani dissolve in the supreme essence by drinking wine. Mountain Born One, there is no doubt about it! - Matrikabheda Tantra, III,34-35 There are many compilations or tantrik digests, discussing a variety of topics a sadhaka or sadhvini needs to know. Shri Shri Shiva Mahadeva. The embodied soul is supreme, whole, eternal, consisting of nothing, stainless. It is the ultimate atomic particle, the Natha. It is supreme Shiva, all pervading. It is the ultimate, that jiva, it is Hamsa, the soul of Shakti - Kaulajnananirnaya The daily puja or worship outlined below is taken from a panchanga or ritual manual. Mahashivratri, Mahashivratri Festival, Mahashivaratri 2011. When Lord Shiva takes a rest, Shiva rests for one 'peak' (three hours) of the night. 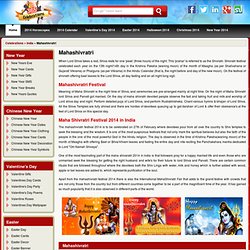 This 'prahar' is referred to as the Shivratri. Shivratri festival celebrated each year on the 13th night/14th day in the Krishna Paksha (waning moon) of the month of Maagha (as per Shalivahana or Gujarati Vikrama) or Phalguna (as per Vikrama) in the Hindu Calendar (that is, the night before and day of the new moon). On the festival of shivratri offering bael leaves to the Lord Shiva, all day fasting and an all night long vigil.

The Ganas: Hooligans of Heaven. The Ganas (categories) are the host of spooks, hobgoblins and spirits who accompany Shiva. 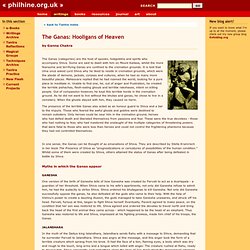 Some are said to dwell with him on Mount Kailasa, whilst the more fearsome and terrifying Ganas are confined to the cremation grounds. It is told that Uma once asked Lord Shiva why he liked to reside in cremation grounds, which were the abode of demons, jackals, corpses and vultures, when he had so many more beautiful places. Mahesvara replied that he had roamed the world, looking for a pure place to meditate in.

Unable to find one, he, out of anger and frustration, he created the terrible pishachas, flesh-eating ghouls and terrible rakshasas, intent on killing people. Out of compassion however, he kept this terrible horde in the cremation ground. MAHA SHIVARATRI-The Night of Lord Shiva/MahaShivratri Festival 2010/Maha Shivratri Festival,Mahashivratri Celebrations. Introduction: Maha Shivratri, the grand night of Shiva this year will fall on 27th of February 2014. 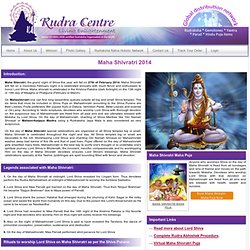 Maha Shivratri will fall on a moonless February night; it is celebrated annually with much fervor and enthusiasm to honor Lord Shiva. Maha shivratri is celebrated in the Krishna Paksha (dark fortnight) on the 13th night or 14th day of Maagha or Phalguna (February or March). On Mahashivratri one can find long serpentine queues outside all big and small Shiva temples. The six items that must be included in Shiva Puja on Mahashivratri according to the Shiva Purana are Bael Leaves, Fruits preferably Ber (jujube fruit) or Datura, Vermilion Paste, Betel Leaves and Incense or Oil Lamp. 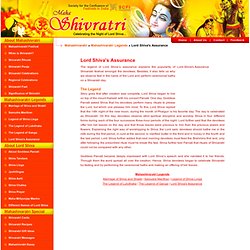 Besides, it also tells us why we observe fast in the name of the Lord and perform ceremonial baths on a Shivaratri day. The Legend Story goes that after creation was complete, Lord Shiva began to live on top of the mount Kailash with his consort Parvati. One day, Goddess Parvati asked Shiva that his devotees perform many rituals to please the Lord, but which one pleases him most. 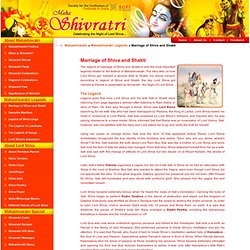 The story tells us how Lord Shiva got married a second time to Shakti, his divine consort. According to legend of Shiva and Shakti, the day Lord Shiva got married to Parvati is celebrated as Shivaratri - the Night of Lord Shiva. The Legend Legend goes that once Lord Shiva and his wife Sati or Shakti were returning from sage Agastya’s ashram after listening to Ram Katha or story of Ram. Shivaratri Rituals,Rituals of Shivaratri,Shivratri Rituals. Devotees of Lord Shiva observe the Shivaratri Festival by following the prescribed rituals with sincerity and devotion. All through the day, devotees abstain from eating food and break their fast only the next morning, after the nightlong worship. Ritual baths of Shivalinga in the numerous Shiva temples by Shiva worshipper, mainly women, is another significant feature of Shivratri customs and traditions. Devotees strongly believe that ritual worship of Lord Shiva on the auspicious day of Shivaratri absolves them of past sins and they are blessed with Moksha.

Rituals Observed on a Shivaratri Morning As a tradition devotees wake up early in the morning of the Mahashivratri day and take a ritual sunrise bath, preferably in the holy waters of river Ganga. They also offer prayers to the Sun God, Vishnu and Shiva as a part of a purification rite observed on all-important Hindu festivals.

Gana : Ganas As Shiva S Attendants. What is the origin of tandav dance? Content. Anandatandava - The Dance of Absolute Bliss. Shiva, Hindu God Shiva, Lord Shiva, Shiva Hindu God, Shiva Destroyer. Tantra - The Art of Philosophy. Tantra has developed a system of thought which makes us see the universe as if it were within ourselves, and ourselves as if we were within the universe. Lord Shiva. Shakti, the Dynamic Energy of Siva. Shakti - The Dynamic Energy of Siva by Jayaram V Shakti is the dynamic power of Siva through which he manifests the worlds and their myriad objects and beings. Monistic schools of Saivism believe that shakti is inseparable from Siva just as heat from fire, light from the sun, night from the sky or a reflection from the mirror. They also believe that Siva is both the efficient and material cause of creation.

Shakti is manifested by Siva only during creation and is withdrawn into himself at the end of creation. How To Worship Lord Shiva or Siva and Shivalingam. How To Worship Lord Siva by Jayaram V In the Sivapurana it has been told that once Sanatkumara was traveling in an aircraft and happened to see sage Parasara, practicing austerities (tapas ) on the banks of the river Saraswathi. Sanatkumara stopped by and asked the latter the reason for being at such a lonely place.

The Symbolism and Worship of Sivalingas in Saivism. The Siva Sutras of Abhinavagupta. Sayujya, the Liberation of Souls. Sayujya - Liberation of Souls or Jivas. Ideal of Manhood, Embodiment of Godhead. Lord Shiva Information,Know About Lord Shiva,Information on Lord Shiva. Blogs » Blog Archive » The Bilva Tree – The Divine Embodiment of Lord Shiva. Shakti. Shekina. The Iconographic Genesis of Shiva. We prostrate to Lord Shiva, the God of Destruction. kAma ari (The destroyer of kAma - cupid/ lust) Shakti. Shiva. Shakti. Shiva - The Sensuous Yogi. Shiva - The Sensuous Yogi. Shakti - Power and Femininity in Indian Art. Shiva as Nataraja - Dance and Destruction In Indian Art. Vedic period. Siva and Saivism Sects. Aspects of Lord Siva. Significance of Lord Siva. Siva and saivism. The Shaktis or goddesses of Hinduism. Saivism Links. Mahashivratri - Union of Shiva and Shakti - a knol by Avadhoot Dandekar.