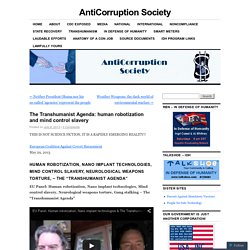 Henning Witte, and Melanie Vritschan from the European Coalition Against Covert Harassment with Alfred Lambremont Webre WATCH PANEL ON YOU TUBE Using detailed research, the EUCACH.ORG panelists describe Transhumanist Agenda that is now using advanced scalar technologies, super quantum computers, a quantum cloud, a super grid of over 1000 grids that is connected to HAARP for global coordinated mind control of a growing population of human robots that are created via these technologies for a global control and enslavement agenda. Shift from electromagnetic to scalar waves Six million brain-entrained humans in the European Union alone 1. Survival Podcast. How Faraday Cages Work" Electricity is the lifeblood of many aspects of our world. 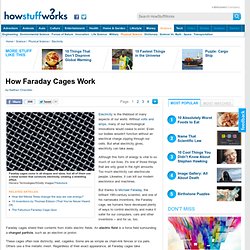 Without volts and amps, many of our technological innovations would cease to exist. Even our bodies wouldn't function without an electrical charge zipping through our cells. But what electricity gives, electricity can take away. Although this form of energy is vital to so much of our lives, it's one of those things that are only good in the right amounts. Too much electricity can electrocute people. But thanks to Michael Faraday, the brilliant 19th-century scientist, and one of his namesake inventions, the Faraday cage, we humans have developed plenty of ways to control electricity and make it safer for our computers, cars and other inventions -- and for us, too.

Faraday cages shield their contents from static electric fields. These cages often look distinctly, well, cagelike. Electromagnetic radiation is all around us. That basic function has plenty of fascinating uses in our electrically cluttered and technology-packed world. Faraday Cage: Garbage Can, Really? Sun Goes Wild: NOAA Issues Alert: Earth Directed X-Class Flare Is On Its Way; Chance Of More.

This morning The Daily Sheeple reported that the biggest sun spot in recent history had been identified on the sun and that it had moved into position facing earth. 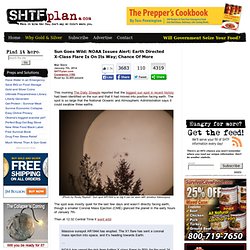 The spot is so large that the National Oceanic and Atmospheric Administration says it could swallow three earths. (Photo by Rocky Raybell : Sun spot AR1944 is so big it can be seen with amateur telescopes) The spot was mostly quiet for the last few days and wasn’t directly facing earth, though a smaller Coronal Mass Ejection (CME) glanced the planet in the early hours of January 7th. Then at 12:32 Central Time it went wild: Massive sunspot AR1944 has erupted. The NASA-ESA Heliophysics Fleet is monitoring the sunspot and CME. (Pictured: NASA’s Solar Dynamics Observatory shows a blast of activity originating from the center of the sun’s disk on Tuesday) The rapid formation of sunspot AR1944 and the earth-facing ejections highlight how quickly life on earth could change if the right conditions are met.

The threat is real. Week 1 of 52: Short Term Emergency Food Supply (List 1) FEMA suggests that each family have a 2 week supply of food and water for their home. 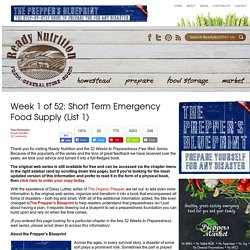 Starting a food supply does not have to be a budget breaker. By slowly accumulating emergency supplies, you will not feel the financial “burn” compared to having to pay for everything up front. Therefore, keeping in mind what type of emergencies that you are planning for, if there are any family members with medical needs, how long you want your food supply to last, and so on, will help you make the best choice for your family.

Taking time to read the nutritional information on the back of the food source and knowing other considerations, will help a person make the best choices for their needs. If a person needs to use their stashed food supply, having foods high in vitamins, nutrients, and proteins will provide their body with what it needs for needed energy and mental clarity. Preps to buy: For those who have pets: 1 large container of dry food – This amount should last 2 weeks or longer Action Items: Rise Of The Preppers: 50 Of The Best Prepper Websites And Blogs On The Internet. Michael Snyder, Contributor Activist Post Are you preparing for the collapse of society? 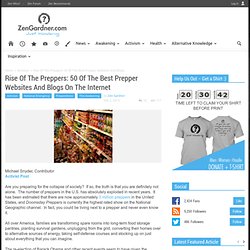 If so, the truth is that you are definitely not alone. The number of preppers in the U.S. has absolutely exploded in recent years. It has been estimated that there are now approximately 3 million preppers in the United States, and Doomsday Preppers is currently the highest rated show on the National Geographic channel. In fact, you could be living next to a prepper and never even know it. All over America, families are transforming spare rooms into long-term food storage pantries, planting survival gardens, unplugging from the grid, converting their homes over to alternative sources of energy, taking self-defense courses and stocking up on just about everything that you can imagine. The re-election of Barack Obama and other recent events seem to have given the prepper movement even more momentum. So what are all of these people prepping for? And that is exactly right. 1.