Writing your Dissertation: Methodology. A key part of your dissertation or thesis is the methodology. 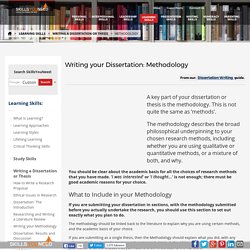 This is not quite the same as ‘methods’. The methodology describes the broad philosophical underpinning to your chosen research methods, including whether you are using qualitative or quantitative methods, or a mixture of both, and why. You should be clear about the academic basis for all the choices of research methods that you have made. 'I was interested' or 'I thought...' is not enough; there must be good academic reasons for your choice. What to Include in your Methodology. The Craft of Research, Third Edition (Chicago Guides to Writing, Editing, and Publishing): Wayne C. Booth, Gregory G. Colomb, Joseph M. Williams: 9780226065663: Amazon.com: Books. World's First 'Smart-Tattoo' Lets You Wear Your Smartphone. The World's First E Ink Tattoo. Biohacking – 666 Surveillance System. Targeted Individuals Canada: Cyberware Technology Project by Taryn East. So what is cyberware, really? 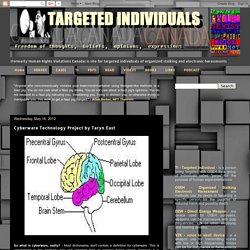 - Most dictionaries don't contain a definition for cyberware. This is unsurprising in this relatively new and unknown field. In science fiction circles, however, it is commonly known to mean the hardware or machine parts implanted in the human body and acting as an interface between our central nervous system and the computers or machinery connected to it. More formally: Cyberware is technology that attempts to create a working interface between machines/computers and the human nervous system, including (but not limited to) the brain. Examples of potential cyberware cover a wide range, but current research tends to approach the field from one of two different angles: Interfaces or Prosthetics. How Wetware Can Help Hardware Makers Beat Moore's Law, Save Energy. Humans may not use all of the brain's computing capacity, but they do use most of the cranium for computing, according to biophysicist Bruno Michel at IBM's Zurich research laboratory. 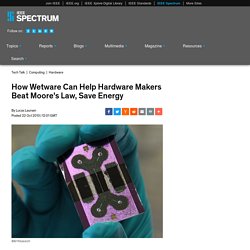 Co-located cortices and capillaries keep our neurons powered and cooled with minimal fuss. Yet today's computers dedicate around 60 percent of their volume to getting electricity in and heat out compared to perhaps 1 percent in a human brain, Michel estimates. Last week in Zurich, he told journalists about IBM's long-term plan to help computers achieve human-like space- and energy efficiency. Meet wetware, your next tech obsession. In spite of this, they certainly have their own set of emerging safety issues, from malicious bio-hacking to changing concepts of identity, and hypothetical “who watches the watchmen?” 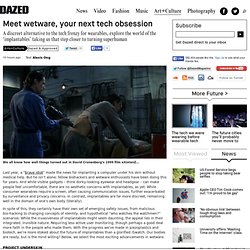 Scenarios. While the invasiveness of implantables might seem daunting, the appeal lies in their integrated, invisible nature. Requiring less active user monitoring, though perhaps a good deal more faith in the people who made them. With the progress we’ve made in piezoplastics and biotech, we’re more stoked about the future of implantables than a glorified iSwatch. Wetware computer - Wikipedia. A wetware computer is an organic computer (also known as an artificial organic brain or a neurocomputer) built from living neurons. 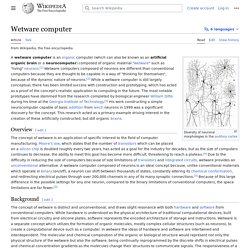 Professor Bill Ditto, at the Georgia Institute of Technology, is the primary researcher driving the creation of these artificially constructed, but still organic brains. One prototype is constructed from leech neurons, and is capable of performing simple arithmetic operations. The concepts are still being researched and prototyped, but in the near future, it is expected that artificially constructed organic brains, even though they are still considerably simpler in design than animal brains, should be capable of simple pattern recognition tasks such as handwriting recognition. See also[edit] References[edit] Wetware (brain) - Wikipedia. Wetware is a term drawn from the computer-related idea of hardware or software, but applied to biological life forms. 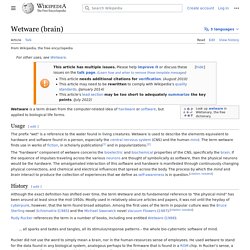 Here the prefix "wet" is a reference to the water found in living creatures. Wetware is used to describe the elements equivalent to hardware and software found in a person, namely the central nervous system (CNS) and the human mind. The term wetware finds use both in works of fiction and in scholarly publications. Here Comes The Wetware. Throw out your touchscreens, kibosh your Kinects: thought-controlled computing is the new new thing. 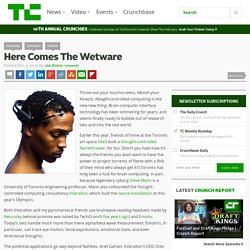 Brain-computer interface technology has been simmering for years, and seems finally ready to bubble out of research labs and into the real world. Earlier this year, friends of mine at the Toronto art space Site3 built a thought-controlled flamethrower, for fun. (Don’t you hate how it’s always the friends you least want to have the power to project torrents of flame with a flick of their mind who always get it?)

Toronto has long been a hub for brain computing, in part because legendary cyborg Steve Mann is a University of Toronto engineering professor. Mann also cofounded the thought-controlled computing consultancy InteraXon, which built the neural installation at this year’s Olympics. Grinder biohacking. Greg Jennings Put The Team On His Back: Kalamazoo College GameDay Sign Roundup. The Most Extreme Body Hacks That Actually Change Your Physical Abilities. The Biohacking and Grinding Movement - How to Become a Transhuman. Cyborgs, grinders, and body hackers: DIY tools for adding sensory perceptions.

Illustration by Alex Eben Meyer Imagine for a moment that you could choose any superpower you wanted. 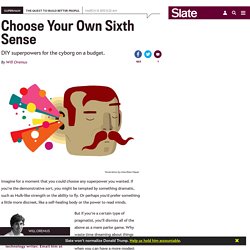 If you’re the demonstrative sort, you might be tempted by something dramatic, such as Hulk-like strength or the ability to fly. Or perhaps you’d prefer something a little more discreet, like a self-healing body or the power to read minds. But if you’re a certain type of pragmatist, you’ll dismiss all of the above as a mere parlor game. 'Grinder' biohacks his eyeballs to get night vision - CNET. Remember the black oil that used to swim around peoples' eyeballs in " The X-Files"? 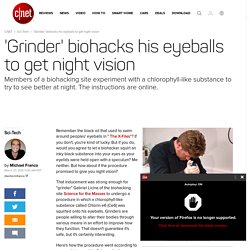 If you don't, you're kind of lucky. But if you do, would you agree to let a biohacker squirt an inky black substance into your eyes as your eyelids were held open with a speculum? Me neither. I've Changed My Mind. Grindhouse Wetware - Wikipedia. In November 2015, Grindhouse members Tim Cannon, Shawn Sarver, Justin Worst, Jessica Waldrip, Michael Seeler, and Marlo Webber had prototypes of Grindhouse’s Northstar device implanted into during simultaneous procedures occurring at the “Cyborg Fair” in Dusseldorf, Germany and at a studio in Pittsburgh. 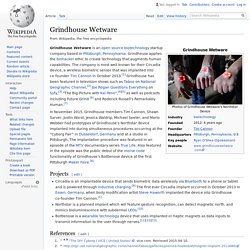 The implantation procedure was featured in an episode of the MTV documentary series True Life. Also featured in the episode was the public debut of the morse code functionality of Grindhouse’s Bottlenose device at the first Pittsburgh Maker Faire.[8] Projects[edit] References[edit] The Beginner’s Guide to Biohacking – Better Humans. To simplify, I filtered it down to 7 actionable biohacks that you can start doing immediately: Movement, nutrition, rewilding, awareness, music, flow, and gratitude. But first… The Biopunk Directory [DIYbio] As a comprehensive directory of biopunk and DIYbio resources, this list is continiously updated. New items are marked with a icon. Biohack.me. TEDxOxford - Kevin Warwick - Cyborg Interfaces. TEDxWarwick - Kevin Warwick - Implants & Technology. The last remaining hurdles to cyborg technology. Biohackers: A journey into cyborg America. Richard Thieme - Hacking Biohacking and the Future of Humanity.

Neurohacking. Neurohacking is the colloquial term for (usually personal or 'DIY') neuroengineering. It is a form of biohacking (qv) focusing on the brain and CNS. Strictly speaking it is any method of manipulating or interfering with the structure and/or function of neurons for improvement or repair. Reasons[edit] Grinder (biohacking) - Wikipedia. Bio-hack me, forum dedicated to biohacking communications and cooperation. It is also host to a wiki of biohacking knowledge at collaborate.biohack.me.Better Humans: Beginner's Guide to Biohacking: a collection on Medium that features intelligent ideas for upgrading yourself, including this article that describes what biohacking is and highlights 7 beginner biohacks.Grindhouse Wetware, biotechnology startup company based in Pittsburgh, Pennsylvania.Dangerous Things, a biotechnology startup company based in Seattle, Washington which focuses on implantable RFID/NFC transponders and magnets. ^ Jump up to: a b c d e Popper, Ben.

Forbes Welcome. 10 Biohackers Who Turned Into Superhumans. Transcend Your Limits. Biohacker's Handbook. Log In. Asprey, who is 6 feet 4 inches tall and on the verge of being muscular, sat alert in a blue polo shirt. His blue-blocker shades rested on the table next to him. (He believes the glasses protect his circadian rhythm from the glow emitted by his phone’s screen.) All morning, he came off as hyperfocused and articulate, able to speak in complete (and compelling) paragraphs about his esoteric health interests. But he was also in constant motion — crossing and uncrossing his legs, adjusting his posture and clearing his throat.

Eventually, he revealed that before our meeting, he dosed himself with a cocktail of substances to enhance his cognitive function. Cyborg America: inside the strange new world of basement body hackers. Ellen Jorgensen: Biohacking. The Beginner’s Guide to Biohacking: What Is It & How To Do It. What is biohacking and why should we care? Hands. Death of a Cyborg. This Biohacker Used Eyedrops To Give Himself Temporary Night Vision. BioHack Academy on Vimeo. m31 [3mm x 1mm biomagnet] Io9.gizmodo. So you want to put a magnet in your finger… - biohack.me. DIYbio. Wikli_DIYbio.

Biopunk.org. Can Hobbyists and Hackers Transform Biotechnology? 1-Biohacking-101-with-Andrew_Clark. Genome at Home: Biohackers Build Their Own Labs. A weekend of biohacking at FutureLabCamp. Biohackers and Grinders. Grinding.be.