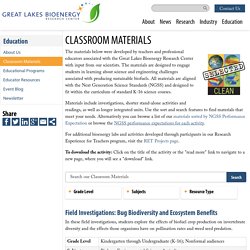 The materials are designed to engage students in learning about science and engineering challenges associated with producing sustainable biofuels. All materials are aligned with the Next Generation Science Standards (NGSS) and designed to fit within the curriculum of standard K-16 science courses. Materials include investigations, shorter stand-alone activities and readings, as well as longer integrated units. Use the sort and search features to find materials that meet your needs. Alternatively you can browse a list of our materials sorted by NGSS Performance Expectation or browse the NGSS performance expectations for each activity. For additional bioenergy labs and activities developed through participants in our Research Experience for Teachers program, visit the RET Projects page. 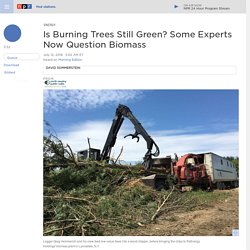 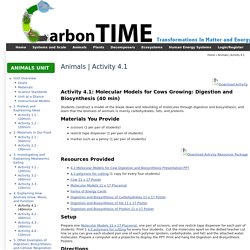 Coach students to simulate the actual process of dehydration synthesis by making a water molecule each time they tape two monomers together. This helps show that each time a bond is broken a chemical reaction takes place and new bonds form. Protein: Show slide 30. Have students tape together four amino acid monomers to form one protein polymer and three water molecules. 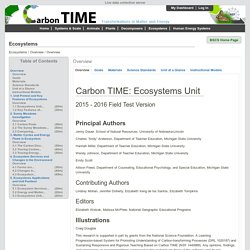 Lizard Evolution Virtual Lab. Climate Educator Guide. Carbon is the fourth most abundant element on Earth and necessary for all life. 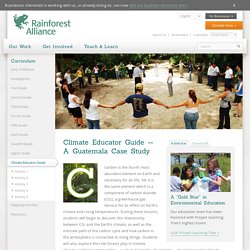 Yet it is the same element which is a component of carbon dioxide (CO2), a greenhouse gas famous for its effect on Earth’s climate and rising temperatures. During these lessons, students will begin to discover the relationship between CO2 and the Earth’s climate, as well as the intricate path of the carbon cycle and how carbon in the atmosphere is connected to living things.

Classroom Activities: What is My Carbon Footprint? MSU Extension Forestry - Wood Slab Energy. Belgian scientists look for biofuel clues in panda poo. Estimation of biomass and its nutrients content. Another month, another global heat record broken — by far. WASHINGTON — Earth dialed the heat up in June, smashing warm temperature records for both the month and the first half of the year. 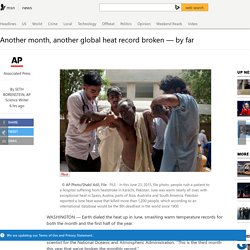 Off-the-charts heat is "getting to be a monthly thing," said Jessica Blunden, a climate scientist for the National Oceanic and Atmospheric Administration. "This is the third month this year that we've broken the monthly record. " "There is almost no way that 2015 isn't going to be the warmest on record," she added. NOAA calculated that the world's average temperature in June hit 61.48 degrees Fahrenheit (16.33 Celsius), breaking the old record set last year by 0.22 degrees (.12 degrees Celsius). Mountain Pine Beetle. Mountain Pine Beetle by D.A. 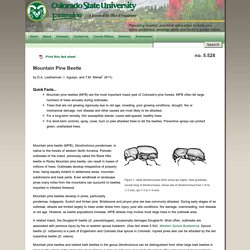 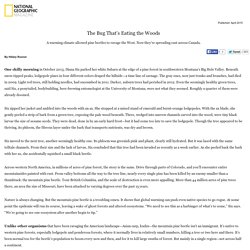 Beneath snow-tipped peaks, lodgepole pines in four different colors draped the hillside—a time line of carnage. The gray ones, now just trunks and branches, had died in 2009. Light red trees, still holding needles, had succumbed in 2011. Bark beetle kill leads to more severe fires, right? Well, maybe. By Gail WellsHigh Country News Posted: 06/24/2012 01:00:00 AM MDT The lodgepole pine and spruce-fir forests of the Intermountain West are reeling under a one-two punch: more frequent and severe wildfires, and an epidemic of tree-killing bark beetles. 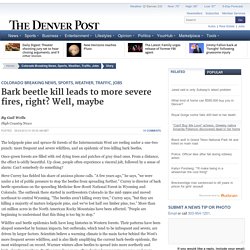 Once-green forests are filled with red dying trees and patches of gray dead ones. The Coal That’s Good for the Climate — NOVA Next. In northern Senegal, near Ross-Bethio, it’s mid-day, the time when the sun is at its hottest. 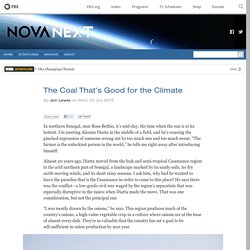 I’m meeting Alioune Diatta in the middle of a field, and he’s wearing the pinched expression of someone wrung out by too much sun and too much sweat. “The farmer is the unluckiest person in the world,” he tells me right away after introducing himself. National Geographic Magazine - NGM.com. New hope for beetle-killed landscapes. From the air, they look like brittle, dead landscapes: millions of acres of scratchy brown pipe cleaners and toothpick logs. Since the 1990s, naturally-occurring bark beetles have multiplied under the effects of drought, climate change and fire-repressed forests, leading to outbreaks that have ravaged forests and left land managers scrambling to deal with a glut of dead trees.

Department of Agriculture indicates. Frequently Asked Questions about Biochar. CNN, Anderson Cooper 360° - Biochar to Save the Planet. As Uses of Biochar Expand, <br />Climate Benefits Still Uncertain. Analysis. Biochar Websites. NASA - Help for the Environment. Can 'biochar' save the planet? ATHENS, Georgia (CNN) -- Over the railroad tracks, near Agriculture Drive on the University of Georgia campus, sits a unique machine that may hold one of the solutions to big environmental problems like energy, food production and even global climate change.

Biochar's high carbon content and porous nature can help soil retain water, nutrients, protect soil microbes. Can 'biochar' save the planet? Carbon Sequestration - Home. Throughout the world intensive agriculture often has resulted in soil physical and chemical degradation, to due erosion and higher output than input rates of nutrients and OM. US Biochar Initiative.

US Biochar Initiative. International Biochar Initiative. Biochar Is a Valuable Soil Amendment This 2,000 year-old practice converts agricultural waste into a soil enhancer that can hold carbon, boost food security, and increase soil biodiversity, and discourage deforestation. Biochar Farms. Biochar not only offers a lot of environmental solutions, it can also provide the farmer and rural communities with a host of real benefits.

These include improved soil quality; greater crop yields; higher fertilization efficiency; reduce contamination of groundwater from herbicides and other pollutants; heat for homes, barns, and other applications; and potentially the ability to sell carbon credits and offsets in emerging carbon markets. University_of_Hawaii_article_1-3-11.pdf. NASA satellite will map soil moisture. Measurement of Soil Moisture. BANR Bioenergy. Bulls and bugs: Four-year study examines pine beetle's impact on elk habitat in the Elkhorns. Beetle kill prompts tree removal on MacDonald Pass. Cars do not need to idle to warm up in cold weather.