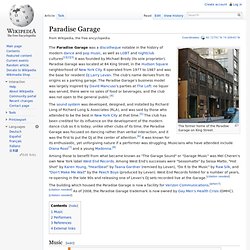 The Paradise Garage was a discotheque notable in the history of modern dance and pop music, as well as LGBT and nightclub cultures[1][2][3] It was founded by Michael Brody (its sole proprietor). Paradise Garage was located at 84 King Street, in the Hudson Square neighborhood of New York City. It operated from 1977 to 1987 and was the base for resident DJ Larry Levan. The club's name derives from its origins as a parking garage. The Paradise Garage's business model was largely inspired by David Mancuso's parties at The Loft: no liquor was served, there were no sales of food or beverages, and the club was not open to the general public.[4] The building which housed the Paradise Garage is now a facility for Verizon Communications. 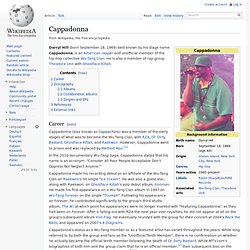 He is also a member of rap group Theodore Unit with Ghostface Killah. 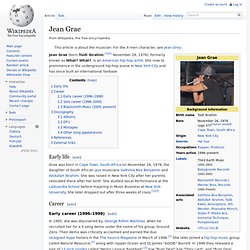 What? , is an American hip-hop artist. She rose to prominence in the underground hip-hop scene in New York City and has since built an international fanbase. Jean Grae - Kill Screen. Monsta Island Czars Discography at Discogs. <div class="alert_message warning"><div class="set_to_page_width"><i class="icon icon-exclamation-triangle icon-large"></i><strong>Please enable Javascript to take full advantage of our site features. 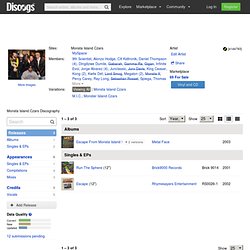 </strong></div></div> Monsta Island Czars Edit Artist More Images Sites: MySpace Members: MF Doom. Early life[edit] Dumile was born in 1971, in London, England, the son of a Trinidadian mother and a Zimbabwean father with an older brother Markham Temple, whom he often gives much credit for many of his accomplishments.[1] He moved with his family to New York and was raised in Long Island, New York. 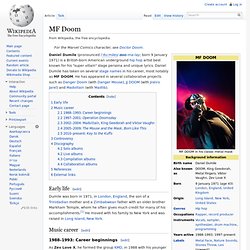 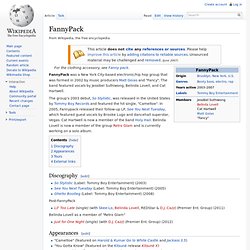 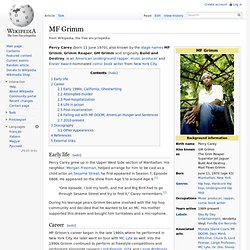 Early life[edit] Percy Carey grew up in the Upper West Side section of Manhattan. His neighbor, Morgan Freeman, helped arrange for him to be cast as a child actor on Sesame Street, he first appeared in Season 7, Episode 0806. He appeared on the show from Age 5 to around Age 9.[1] Day By Day Entertainment. InfinitEvol Brooklyn based veteran EM-CEE hailing from the Bronx. 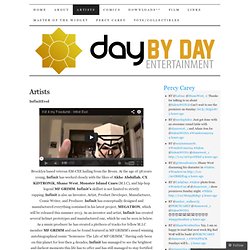 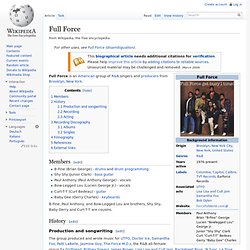 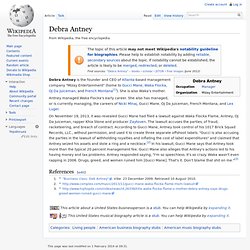 She is also Waka's mother. On November 19, 2013, it was revealed Gucci Mane had filed a lawsuit against Waka Flocka Flame, Antney, OJ Da Juiceman, rapper Khia Stone and producer Zaytoven. The lawsuit accuses the parties, of fraud, racketeering, and breach of contract. According to Gucci Mane, Antney took control of his 1017 Brick Squad Records, LLC., without permission, and used it to create three separate offshoot labels. "Gucci is also accusing the parties in the lawsuit of withholding royalties and inflating the cost of label expenditures" and claimed that Antney seized his assets and stole a ring and a necklace.[2] In his lawsuit, Gucci Mane says that Antney took more than the typical 20 percent management fee.

Nicki Minaj. ThemeAddict: WWE The Music, Vol. 6. ThemeAddict: WWE The Music, Vol. 6[2][3] is a compilation album released by WWE in 2004. It mostly features recent theme songs of wrestlers on the roster at the time. The album reached a peak of #38 on the Billboard 200[4] and #2 Billboard Top Soundtracks chart.[4] Track listing[edit] Notes[edit] The CD was released with a bonus DVD which featured the songs set to entrance videos. Nicki Minaj - Playtimes Over. A$AP Mob. A$AP Ant - "See Me" oG $wank. Joey Badass - World Domination (#7, 1999) HD.

Wu-Tang Corp. - Home of the Wu-Tang Clan and Killa Beez. Swizz Beatz. Life and career[edit] 1978–1997: Early life[edit] Q-Tip (musician) Born Jonathan Davis on April 10, 1970 in Harlem, he converted to Islam in the mid-1990s, and changed his name to Kamaal Ibn John Fareed.[4] He moved to St. Albans, Queens as a child. As referenced in the song "Check the Rhime", he mostly resided at Linden Boulevard. His father was from Montserrat, a British territory in the eastern Caribbean.[5] His mother is an African American from Alabama. DMX (rapper) Early life DMX was born Earl Simmons in Mount Vernon and was raised in Yonkers, New York.[2][3] Simmons went through an abusive childhood that included stays at group homes and frequent arrests.[3] Music career 1996–98: It's Dark and Hell Is Hot and Flesh of My Flesh, Blood of My Blood. Busta Rhymes. Trevor Tahiem Smith, Jr. , (born May 20, 1972), [ 2 ] better known by his stage name Busta Rhymes , is an American rapper, producer and actor.

Chuck D of Public Enemy gave him the alias Busta Rhymes after NFL wide receiver George "Buster" Rhymes . The Last Poets. The Last Poets is the name for several groups of poets and musicians who arose from the late 1960s African-American civil rights movement's black nationalist movement. The name is taken from a poem by the South African revolutionary poet Keorapetse Kgositsile, who believed he was in the last era of poetry before guns would take over.

The original users of that name were the trio of Felipe Luciano, Gylan Kain, and David Nelson. However, it is the versions of the group led by Jalaluddin Masur Nuriddin and/or Umar Bin Hassan that have penetrated mass culture to a legendary degree. The Last Poets have been cited as one of the earliest influences on hip-hop music. Critic Jason Ankeny wrote: "With their politically charged raps, taut rhythms, and dedication to raising African-American consciousness, the Last Poets almost single-handedly laid the groundwork for the emergence of hip-hop History[edit] Gil Scott-Heron. Mobb Deep. Home - Azealia Banks. ATLANTIS - AZEALIA BANKS (**OFFICIAL VIDEO**) (5) Christopher Eral. Azealia Banks - L8R. Beastie Boys. Beastie Boys are an American hip hop band from New York City, formed in 1981. The Conglomerate (American group) 1996: Flipmode Remixes 2002: Arsenal For The Streets pt. 12003: Arsenal For The Streets pt. 2 (The Full Court Press)2007: The Facelift pt. 12007: The Full Course Meal2012: Catastrophic (as newly formed Conglomerate)