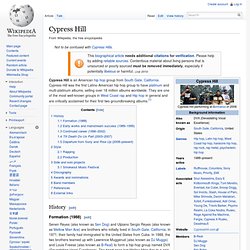 Cypress Hill was the first Latino-American hip hop group to have platinum and multi-platinum albums, selling over 18 million albums worldwide. They are one of the most well-known groups in West Coast rap and Hip hop in general and are critically acclaimed for their first two groundbreaking albums.[1] History[edit] Formation (1988)[edit] Senen Reyes (also known as Sen Dog) and Ulpiano Sergio Reyes (also known as Mellow Man Ace) are brothers who initially lived in South Gate, California. Early works and mainstream success (1989–1995)[edit] The group later played at Woodstock 94, introducing new member Eric Bobo, son of Willie Bobo and formerly a percussionist with the Beastie Boys. Their third album III: Temples of Boom was released in 1995, selling 1.5 million copies and reaching number 3 on the Billboard 200 on the strength of the hit single "Throw Your Set in the Air". 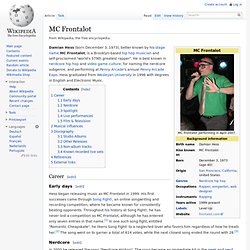 His first successes came through Song Fight! , an online songwriting and recording competition, where he became known for consistently beating opponents. Throughout his history at Song Fight! 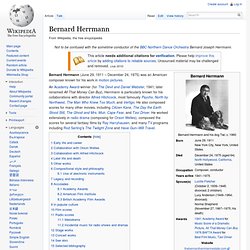 Early life and career[edit] Herrmann, the son of a Jewish middle-class family of Russian origin, was born in New York City as Max Herman.[1] He attended high school at DeWitt Clinton High School, at that time on 10th Avenue and 59th Street in New York City.[2] His father encouraged music activity, taking him to the opera, and encouraging him to learn the violin. After winning a composition prize at the age of thirteen, he decided to concentrate on music, and went to New York University where he studied with Percy Grainger and Philip James. Bernard Herrmann - Psycho (theme) The Day The Earth Stood Still Soundtrack Suite (Bernard Herrmann) Kill Bill: Vol. 1 - Twisted Nerve. Twisted Nerve by Bernard Herrmann. Spindrift (band) In the summer of 2001, band members Kirpatrick Thomas, Joe Baluta and Zachary Hansen re-located to Los Angeles. 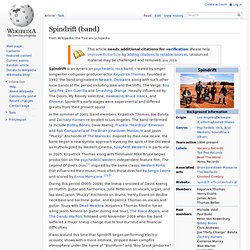 The band re-formed to include Bobby Bones, Dave Koenig, Frankie "Teardrop" Emerson and Rob Campanella of The Brian Jonestown Massacre and Jason “Plucky” Anchondo of The Warlocks. Inspired by their new locale, the band began a new stylistic approach evoking the spirit of the Old West as mythologized by Western Cinema, Spaghetti Westerns in particular. In 2005, Kirpatrick Thomas along with filmmaker Mike Bruce began production on the psychedelic western independent feature film, The Legend Of God’s Gun,[1] inspired by the same classic Western Films that influenced their music, most often those directed by Sergio Leone and scored by Ennio Morricone.[2][3] In 2008, Spindrift contributed to the soundtrack of the feature film Hell Ride produced by Quentin Tarantino.[4][5][6] The film, Dust Up,[8] starring Amber Benson also contained a Spindrift score and was released Oct. 2012.

··· BASSNECTAR ··· Sway Calloway. Sway Calloway (born August 23, 1970), better known mononymously as Sway is a rapper and reporter and executive producer for MTV News.[1] He is also the co-host of the nationally syndicated radio show The Wake Up Show. 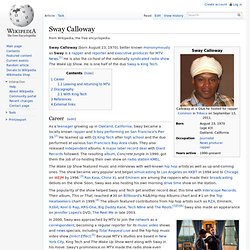 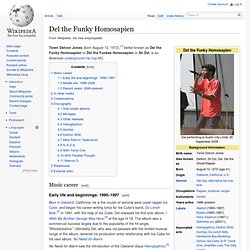 The Pharcyde. History[edit] Early years[edit] Debut album[edit] The group, along with producer J-Swift, recorded their first album Bizarre Ride II the Pharcyde, which was released in September 1992.[7] The album was certified Gold by the RIAA in 1996.[8] The album was highly acclaimed, and became one of the most praised and influential alternative hip hop albums of the 1990s.[9][10] Problems between the group and producer J-Swift began during the recording of the debut, with infighting and "personality conflicts".[8] J-Swift started a crack habit,[13] from which he is still trying to recover. 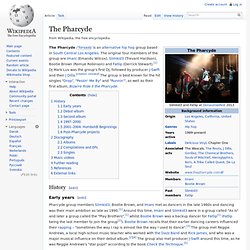 A documentary, 1 More Hit (2007), recorded his attempts to recover from his addiction and to regain his music career.[14][15] Souls of Mischief. History[edit] Oakland native Tajai began rhyming with future band mate A-Plus at age 8, while both were in elementary school.[1] Tajai and Phesto met later in junior high school.[2] Tajai later introduced A-Plus and Phesto to the remaining Souls of Mischief member, Opio, and the group informally formed in high school before making its major-label debut on Jive Records with the group's well-received album 93 'til Infinity, in 1993.[2] On January 6, 2009, Souls of Mischief released the Tour Stories EP produced by Domino and co-produced by Prince Paul. 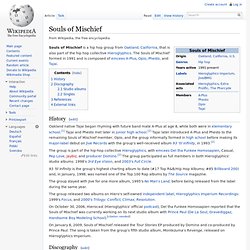 The song is taken from the group's fifth studio album, Montezuma's Revenge, released on Hieroglyphics Imperium.