Manchester - Entertainment - Art and Science, sitting up a tree… De humani corporis fabrica illustrated by Renaissance artist 'Studio of Titian' The Fabrica is known for its highly detailed illustrations of human dissections, often in allegorical poses. 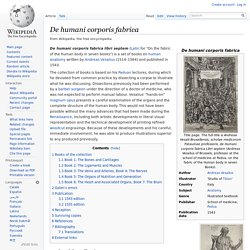 De humani corporis fabrica libri septem (Latin for "On the fabric of the human body in seven books") is a set of books on human anatomy written by Andreas Vesalius (1514–1564) and published in 1543. The collection of books is based on his Paduan lectures, during which he deviated from common practice by dissecting a corpse to illustrate what he was discussing. Dissections previously had been performed by a barber surgeon under the direction of a doctor of medicine, who was not expected to perform manual labour. Vesalius' "hands-on" magnum opus presents a careful examination of the organs and the complete structure of the human body. This would not have been possible without the many advances that had been made during the Renaissance, including both artistic developments in literal visual representation and the technical development of printing refined woodcut engravings. ABOUT - Fun Palaces.

Fun Palaces – Everyone an artist, everyone a scientist - The Space. Fun Palaces is a nationwide campaign for culture at the heart of British life. 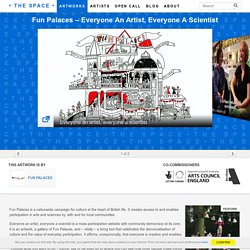 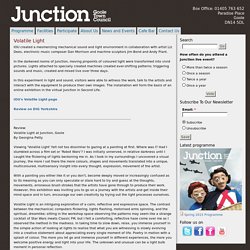 In the darkened rooms of Junction, moving pinpoints of coloured light were transformed into vivid pictures. Lights attached to specially created machines created ever-shifting patterns; triggering sounds and music, created and mixed live over three days. In this experiment in light and sound, visitors were able to witness the work, talk to the artists and interact with the equipment to produce their own images. The installation will form the basis of an online exhibition in the virtual Junction in Second Life. IOU's Volatile Light page Review on DIG Yorkshire Review: Volatile Light at Junction, Goole By Georgina Petty Viewing 'Volatile Light' felt not too dissimilar to gazing at a painting at first. 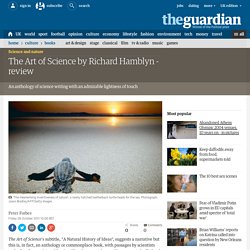 Science is certainly broad enough to accommodate any number of anthologies, and this takes its place alongside such collections as Humphrey Jennings's Pandaemonium (1985), John Carey's Faber Book of Science (1995) and Richard Dawkins's Oxford Book of Modern Science Writing (2008). Art & Science Festival at Manchester Art Gallery. Over 500,000 people flocked to Manchester Art Gallery in just 12 months. 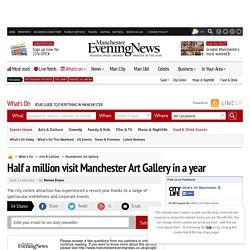 The popular attraction in the city centre has experienced a record year thanks to a range of spectacular exhibitions and corporate events. Top figures from the art world, such as Grayson Perry and Jeremy Deller, to arts & health and learning activities, the gallery's hugely varied programme attracted 514,852 visitors between 1 April 2013 and 31 March 2014. "Our vision to present internationally important art has not only brought economic benefit to the city, but is obviously meeting local residents' desire for higher quality programming.

" This is almost 100,000 more than the 415,785 visitors in the corresponding period in 2012-13. The figure smashed projections and with 8,531 visitors in the first few days of 2013/14 (up to Sun 6 April), Manchester Art Gallery looks set for another bumper year, with shows including the current exhibition 'Joanna Vasconcelos: Time Machine' and 'The Sensory War'. Art / Science / Innovation. What's On for Art meets science - Manchester Science Festival 2014. Antony Hall: Arts Workshops. I offer a range of workshops which I consider to be an extension of my art practice, demonstrating the processes and research methods behind my art work. 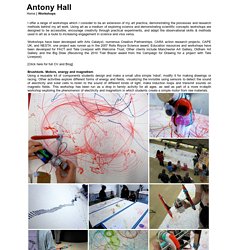 Using art as a medium of exploring science and demonstrating scientific concepts workshops are designed to be accessible, encourage creativity through practical experiments, and adapt the observational skills & methods used in art as a route to increasing engagement in science and visa versa. Workshops have been developed with Arts Catalyst, numerous Creative Partnerships, CARA action research projects, CAPE UK, and NESTA. one project was runner up in the 2007 Rolls Royce Science award. Education resources and workshops have been developed for FACT and Tate Liverpool with Welcome Trust, Other clients include Manchester Art Gallery, Oldham Art Gallery and the Big Draw (Receiving the 2010 Trail Blazer award from the Campaign for Drawing for a project with Tate Liverpool) Technology Hacking project. Images from Creative Partnerships. MA Art and Science - Central Saint Martins.

Mae Jemison: The arts and sciences are not separate. Mae Jemison is an astronaut, a medical doctor, an art collector, and a dancer. 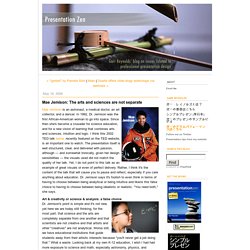 In 1992, Dr. Jemison was the first African-American woman to go into space. Since then she's become a crusader for science education, and for a new vision of learning that combines arts and sciences, intuition and logic. I think this 2002 TED talk below, recently featured on the TED website, is an important one to watch. The presentation itself is well structured, clear, and delivered with passion, although — and somewhat ironically, given her design sensibilities — the visuals used did not match the quality of her talk. Art & creativity or science & analysis: a false choice Dr. "If we keep thinking that the arts are separate from the sciences...and that it's cute to say 'I don't understand anything about [the arts] or I don't understand anything about [the sciences]' then we're going to have problems.