Scandinavian Immigration. From stereograph, in On the Trail of the Immigrant, by Edward Steiner, 1906. 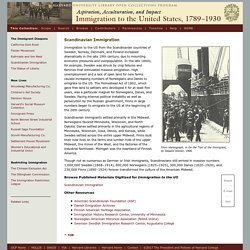 Immigration to the US from the Scandinavian countries of Sweden, Norway, Denmark, and Finland increased dramatically in the late 19th century, due to mounting economic pressures and overpopulation. In the late 1860s, for example, Sweden was struck by crop failures and famines that stimulated massive emigration. High unemployment and a lack of open land for new farms caused increasing numbers of Norwegians and Danes to emigrate to the US. The Homestead Act of 1862, which gave free land to settlers who developed it for at least five years, was a particular magnet for Norwegians, Danes, and Swedes. Facing internal political instability as well as persecution by the Russian government, Finns in large numbers began to emigrate to the US at the beginning of the 20th century. Scandinavian immigrants settled primarily in the Midwest. Browse Published Materials Digitized for Immigration to the US Scandinavian Immigration. 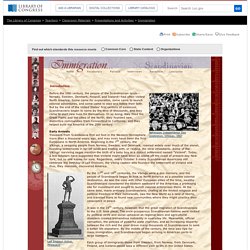 Scandinavian - The Norwegians - Immigration...- Classroom Presentation. The Norwegians Although Sweden sent more emigrants to the United States than any other Scandinavian country, Norway sent a greater percentage of its population—nearly 1 million people between 1820 and 1920. 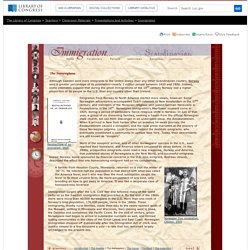 Indeed, some estimates suggest that during the great immigrations of the 19th century Norway lost a higher proportion of its people to the U.S. than any country other than Ireland. Emigration from Norway to North America started more slowly, however. Scandinavian - The Swedes - Immigration...- Classroom Presentation. Tales from the Child of Immigrants. Barberg-Selvälä-Salmonson Sauna, Cokato. "Sauna" is the word used to describe the Finnish practice of bathing through heat, sweat, and steam, and the building in which this bathing takes place. 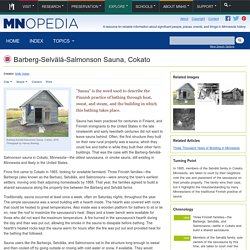 Sauna has been practiced for centuries in Finland, and Finnish immigrants to the United States in the late nineteenth and early twentieth centuries did not want to leave sauna behind. Often, the first structure they built on their new rural property was a sauna, which they could live and bathe in while they built their other farm buildings. Svenska Folkets Tidning. Svenska Folkets Tidning was a successful Minneapolis-based newspaper in publication from 1881 to 1927. 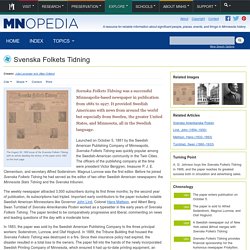 It provided Swedish Americans with news from around the world but especially from Sweden, the greater United States, and Minnesota, all in the Swedish language. Launched on October 5, 1881 by the Swedish American Publishing Company of Minneapolis, Svenska Folkets Tidning was quickly popular among the Swedish-American community in the Twin Cities.

The officers of the publishing company at the time were president Victor Berggren, treasurer P. J. E. The weekly newspaper attracted 3,000 subscribers during its first three months; by the second year of publication, its subscriptions had tripled. Mattson, Hans (1832–1893) Primary. 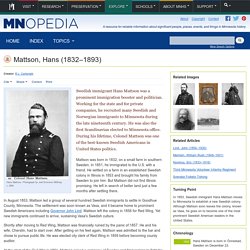 Swede Hollow. Nestled into a small valley between the mansions of Dayton's Bluff and St. 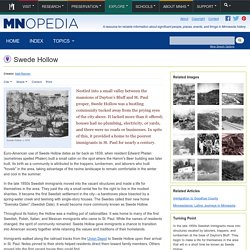 Paul proper, Swede Hollow was a bustling community tucked away from the prying eyes of the city above. It lacked more than it offered; houses had no plumbing, electricity, or yards, and there were no roads or businesses. In spite of this, it provided a home to the poorest immigrants in St. Paul for nearly a century. Euro-American use of Swede Hollow dates as far back as 1839, when resident Edward Phelan (sometimes spelled Phalen) built a small cabin on the spot where the Hamm's Beer building was later built. Immigration to the Iron Range, 1880–1930. During the early twentieth century, the population of the Iron Range was among the most ethnically diverse in Minnesota. 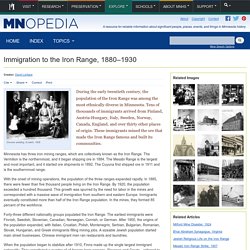 Tens of thousands of immigrants arrived from Finland, Austria-Hungary, Italy, Sweden, Norway, Canada, England, and over thirty other places of origin. These immigrants mined the ore that made the Iron Range famous and built its communities. Minnesota has three iron mining ranges, which are collectively known as the Iron Range. Swedish Immigration. In 1638 the Swedish government employed the experience Dutch explorer, Peter Minuit, to help them establish a colony in America. 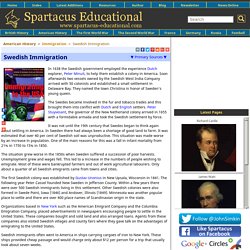 Soon afterwards two vessels owned by the Swedish West India Company arrived with 50 colonists and established a small settlement in Delaware Bay. They named the town Christina in honor of Sweden's young queen. The Swedes became involved in the fur and tobacco trades and this brought them into conflict with Dutch and English settlers.