From Exclusion to Integration: The Story of Jews in Minnesota. Poverty, prejudice, and persecution sparked two waves of Jewish immigration to the United States in the nineteenth century. 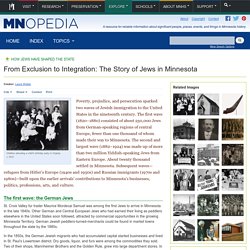 The first wave (1820–1880) consisted of about 250,000 Jews from German-speaking regions of central Europe, fewer than one thousand of whom made their way to Minnesota. The second and largest wave (1882–1924) was made up of more than two million Yiddish-speaking Jews from Eastern Europe. About twenty thousand settled in Minnesota. Subsequent waves—refugees from Hitler’s Europe (1940s and 1950s) and Russian immigrants (1970s and 1980s)—built upon the earlier arrivals’ contributions to Minnesota’s businesses, politics, professions, arts, and culture. Jewish Historical Society of the Upper Midwest » Blog Archive » When Did Jews Come to Minnesota and Why?

Posted by Julie | Filed under Guest Contributor: Linda Schloff Period 1: 1820-1880: Jews from German-Speaking Countries Almost a quarter million (250,000) Jews moved from German-speaking countries to the United States between 1820 and 1889. 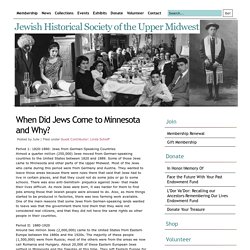 Some of those Jews came to Minnesota and other parts of the Upper Midwest. Most of the Jews who came during this period were from Germany and Austria. They wanted to leave those areas because there were rules there that said that Jews had to live in certain places, and that they could not do some jobs or go to some schools. There was also anti-Semitism- prejudice against Jews- that made their lives difficult. B'nai Abraham Synagogue, Virginia. Dedicated in 1909, the red brick synagogue of Virginia's B'nai Abraham congregation was called the most beautiful religious building on the Iron Range. 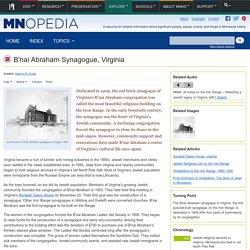 In the early twentieth century, the synagogue was the heart of Virginia's Jewish community. A declining congregation forced the synagogue to close its doors in the mid-1990s. However, community support and renovations have made B'nai Abraham a center of Virginia's cultural life once again. Early Bohemian immigration into the West End, St. Paul, MN. 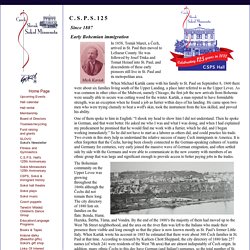 Paul then moved to LeSueur County. He was followed by Josef Trnka and Tomaš Herauf into St. Paul, and descendents of these early pioneers still live in St. When Michael Karták came with his family to St. One of them spoke to him in English: “I shook my head to show him I did not understand. How the Russian-speaking community became Minnesota's invisible immigrants. On a recent Saturday morning, Igor Fridman walked into the Booth Manor senior apartments in Minneapolis to see his 90-year-old grandmother, who has lived in the affordable housing complex near Loring Park for more than two decades. 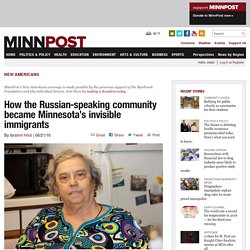 In the building’s lobby, some residents chatted by the elevators, some gathered around a table, while others talked with their loved ones through Skype. It was, in other words, an utterly unremarkable scene, except for one detail: Everyone was speaking Russian. That’s because the majority of the residents in the complex are immigrants from the former Soviet Union.

“This place feels like home,” said Basya Fridman, who emigrated from Moldova in the early 1990s. “I like it a lot.” Irish have left their mark on Minnesota. The history of Irish immigration to America is significant and well-known. 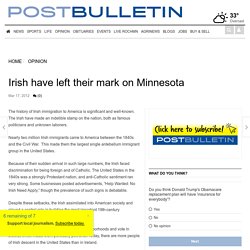 The Irish have made an indelible stamp on the nation, both as famous politicians and unknown laborers. Nearly two million Irish immigrants came to America between the 1840s and the Civil War. St. Paul Sokol. When Czech and Slovak immigrants moved to Minnesota in the late nineteenth century, they carried with them the idea of a Sokol—a social, cultural, and gymnastics society that combined physical and mental education. 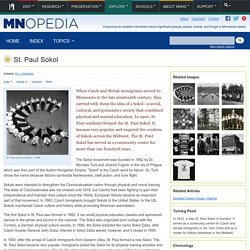 Russian culture pride in west metro increasingly visible. In their Minnetonka classroom, 20 kindergartners and first-graders repeat Russian words as their teacher slowly sounds them out. 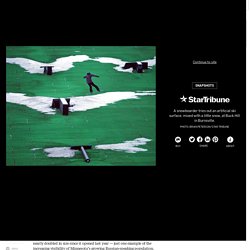 The lesson, though, isn’t just for their schooling, but part of a broader effort to keep their culture alive. The charter school, Nasha Shkola, which means “Our School” in Russian, has nearly doubled in size since it opened last year — just one example of the increasing visibility of Minnesota’s growing Russian-speaking population. Many other institutions that serve the thriving immigrant population have sprung up across the Twin Cities. Among them: a Russian newspaper in Plymouth, some 30 churches and a synagogue, a community center in St.

Paul, and hundreds of Russian restaurants and other businesses. “Wherever you’re going, there are Russian speakers,” said Mark Stipakov, who left St. It’s an immigrant community that may not be well-known in the Twin Cities because in many ways it quietly blends into the largely European-heritage region. MPR: Bosnians find home. Bosnians find home By Laurel Druley Minnesota Public Radio March 26, 2002 There's another wave of immigration in Rochester. 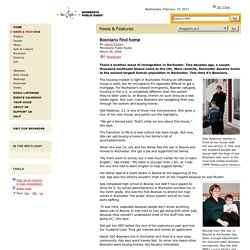 Two decades ago, a couple thousand southeast Asians came to the city. More recently, Rochester became home to the second-largest Somali population in Rochester. This time it's Bosnians.