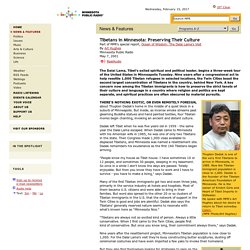 Nine years after a congressional act to help resettle 1,000 Tibetan refugees in selected locations, the Twin Cities boast the second largest concentration of Tibetans in the country, behind New York. A key concern now among the Tibetan immigrants is how to preserve the strict tenets of their culture and language in a country where religion and politics are kept separate, and spiritual practices are often obscured by material pursuits.

THERE'S NOTHING EXOTIC, OR EVEN REMOTELY FOREIGN, about Thupten Dadak's home in the middle of a quiet block in a suburb of Minneapolis. But inside, as incense smoke streams past gleaming Buddha statues and hand painted textiles, four Tibetan monks begin chanting, invoking an ancient and distant culture. MPR: Hmong in Minnesota still face language and cultural barriers. New information released by the U.S. 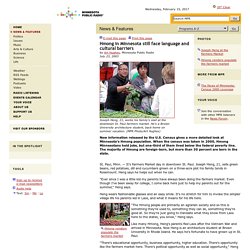 Census gives a more detailed look at Minnesota's Hmong population. When the census was taken in 2000, Hmong Minnesotans held jobs, but one-third of them lived below the federal poverty line. The majority of Hmong are foreign-born, but more than 30 percent are born in the state. St. Paul, Minn. — It's Farmers Market day in downtown St. "Ever since I was a little kid my parents have always been doing the farmers market. Heng wears fashionable glasses and an easy smile. "The Hmong people are primarily an agrarian society and so this is something they're used to, something they can do, something they're good at.

Hmong - Refugee &amp; Immigrant Populations in Minneapolis-St. Paul, Minnesota. History of the Hmong In Southeast Asia the Hmong as an ethnic group lived across the northern area of three different countries—Thailand, Laos, and Vietnam. 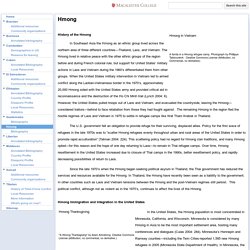 The Hmong lived in relative peace with the other ethnic groups of the region before and during French colonial rule, but support for United States’ military actions in Laos and Vietnam during the 1960’s differentiated them from other groups. When the United States military intervention in Vietnam led to armed conflict along the Laotian-Vietnamese border in the 1970’s, approximately 20,000 Hmong sided with the United States army and provided critical aid in reconnaissance and the destruction of the Ho Chi Minh trail (Lynch 2004: 6).

However, the United States pulled troops out of Laos and Vietnam, and evacuated the countryside, leaving the Hmong—considered traitors—behind to face retaliation from those they had fought against. The U.S. government felt an obligation to provide refuge for their surviving, displaced allies. Minnesota Hmong at 40: First immigrants set the bar high for children – Twin Cities. On mobile? 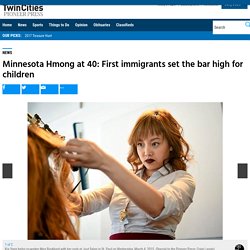 View charts showing Hmong occupations and progress Kia Yang’s father worked hard so his children could get an education. Carrying on the culture. Junchi Vang points at photos of family members back in Ban Vinai camp Photo By: Dymanh Chhoun When you go into an interview, you have all your notes and background information on that person. 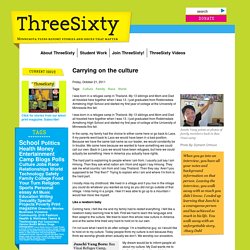 Leaving the interview, you walk away with so much you didn’t know. I ended up learning that Junchi is a courageous person and has achieved so much in his life. You walk away with an unforgettable story. I was born in a refugee camp in Thailand. In the camp, my family had the choice to either come here or go back to Laos. The hard part is explaining to people where I am from. I mostly miss my childhood. Like a newborn baby Coming here, I felt like me and my family had to restart everything. I’m not sure what I want to do after college. Junchi VangBorn: Ban Vinai Refugee Camp, Thailand, 1991 Residence: Minneapolis Moved to Minnesota: 2004 Current occupation: Freshman at the University of Minnesota What do you miss about Thailand? Nowhere on the map of the world. Kao Kalia Yang standing next to her family photos at her home Photo By: Dymanh Chhoun Kalia told me that instead of kissing to show affection, the Hmong sniff to get a piece of each other inside; kissing is just a touching of surfaces. 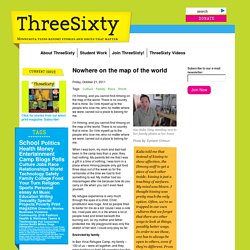 My mind was blown. I thought kissing was pretty much the only option. Often, we're so trapped in our own cultures that we forget that there are other ways to look at things, possibly better ways. Transcript of Saengmany Ratsabout Laos. Transcript of Renita Sebastin India. Transcript of Pa Thao Thailand. Transcript of Natasha Gomez Japan. Transcript of Caceelia Moe Laos. Indochinese Refugee Resettlement Office, 1975–1986. Liang May Seen (c.1871–1946) Liang May Seen was the first woman of Chinese descent to live in Minnesota. 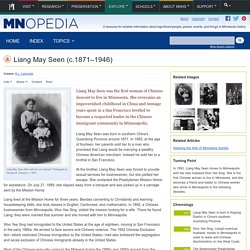 She overcame an impoverished childhood in China and teenage years spent in a San Francisco brothel to become a respected leader in the Chinese immigrant community in Minneapolis. Liang May Seen was born in southern China's Guandong Province around 1871. In 1885, at the age of fourteen, her parents sold her to a man who promised that Liang would be marrying a wealthy Chinese American merchant.

Instead he sold her to a brothel in San Francisco. At the brothel, Liang May Seen was forced to provide sexual services for businessmen, but she plotted her escape.