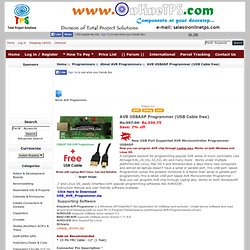 Works on both Windows and Linux OS.A complete solution for programming popular AVR series of micro controllers Like Atmega 8,8L,16,16L,32,32L etc and many more . Works under multiple platforms.like Linux, Mac OS X and Windows.Now a days many new computers and almost all laptops doesn't have a serial or parallel port, this USB port based Programmer solves the problem moreover it is faster than serial or parallel port programmers.This is latest USB port based AVR Microcontroller Programmer - Now you can program AVR chip through Laptop also. 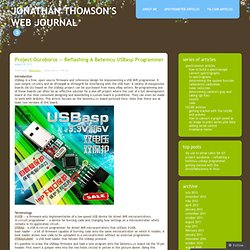 It uses simple circuitry and an ATmega8 or ATmega*8 for interfacing with the USB host. A variety of inexpensive boards ($6 US) based on the USBasp project can be purchased from many eBay sellers. Re-programming one of these boards can often be an effective solution for a one-off project where the cost of a full development board or the time consumed designing and assembling a custom board is prohibitive. They can even be made to work with Arduino. How to program Arduino by using USBasp without bootloader « Tutorial by Cytron. Introduction By using USBasp, we are able to download the program directly to the Arduino Duemilanove board or others AVR microcontroller without pre-program bootloader. 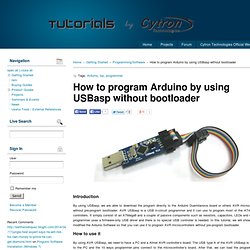 AVR USBasp is a USB in-circuit programmer and it can use to program most of the ATmel AVR controllers. It simply consist of an ATMega8 and a couple of passive components such as resistors, capacitors, LEDs and ect. Arduino from Scratch - I'MM_ Media lab. Click here to edit contents of this page. 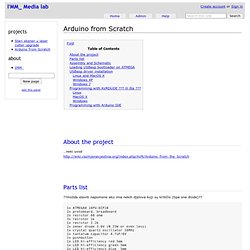 Click here to toggle editing of individual sections of the page (if possible). Watch headings for an "edit" link when available. Append content without editing the whole page source. Check out how this page has evolved in the past. If you want to discuss contents of this page - this is the easiest way to do it. USBasp paket ulang bebas trojan « Pikir dan Rasa. Di artikel sebelumnya saya kemukakan bagaimana file installer_x86.exe yang sering memicu peringatan antivirus Avira (terdeteksi sebagai trojan) . 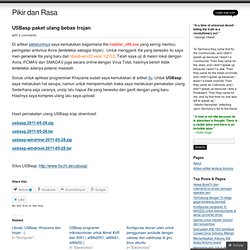 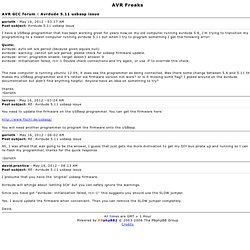 USBasp - USB programmer for Atmel AVR controllers. Official USBasp product by MSX A portion of each sale goes to this project! 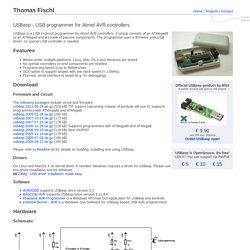 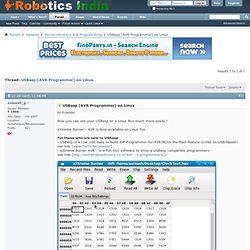 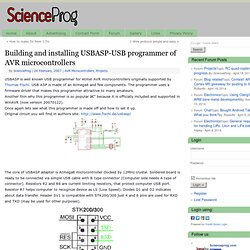 USB ASP is made of an Atmega8 and few components. The programmer uses a firmware driver that makes this programmer attractive to many amateurs. Another thin why this programmer is so popular â€“ because it is officially included and supported in WinAVR (now version 20070122). Once again lets see what this programmer is made off and how to set it up. Original circuit you will find in authors site: USBASP Stripboard layout. Making small USBasp.

Small and target voltage : 2 3~5V The kit is sold with Youpit electoronics. 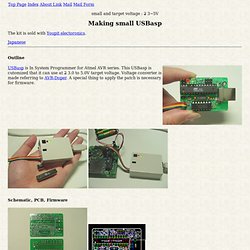 Japanese Outline. USB Key AVR Programmer « fabiobaltieri. So, you saw some AVR microcontrollers and you decided they are cute (they really are!). If you choose to work in plain C what you need is just a toolchain (you probably have some package ready for your distribution), the avr-libc library, a programming software like avrdude and a hardware programmer! While you can freely download all the software you need, including the source code, for the programming hardware you have to choose between buying a commercial programmer (either from Atmel or some third party) and building your own. Stefanbeller/USBasp. USBasp - Bobs Projects. USBasp: AVR programmer based on ATmega8. USBASP driver for Windows 7 and Windows Vista x64 - Announcements.

Until now, the USBASP windows driver wasn’t signed. On older versions of windows this was’t too much of a problem as you could override the signature error. On Windows Vista x64 and Windows 7, it is almost a show stopper. Various methods have been suggested including a utility called Driver Signature Enforcement Overrider or Pressing F8 at boot time and selecting Disable Driver Signature Enforcement. These approaches were far from ideal.

With the release of libusb-win32 version 1.2.4.0 this is a thing of the past. OK, now for the installation procedure… Download the driver from and unzip itFor those having issues with the zip file, please try the following rar file the USBASP into your USB portThe system will attempt to install a driver from Windows Update and will fail At this point, go into device manager and find the entry for the USBASP programmer. USBasp tutorial: USBasp driver installation « Electronics – Tuts, tips and much more … Posted by Omkar on April 19, 2009 In this post we will see how to install windows driver for USBasp. Steps explained below are applicable for WindowsXP: USBasp drivers for 64 bit Windows 7. The most cost-effective way to program an ATmega/ATtiny MCU that’s not embedded in a development board such as the Arduino is to buy yourself a USB in-system programmer (ISP).

There are dozens available on ebay for just a few pounds, and that’s where I got mine. Unfortunately when it arrived I discovered that there were no ‘official’ drivers for 64-bit editions of Windows such as Windows 7 x64 which I use. A quick look around the net yielded some hope with blogs and forum posts all offering up possible fixes ranging from unofficial drivers to hacks that disabled checking the digital signature on the USB driver – signed drivers are now a mandatory requirement for the 64 bit editions of Windows. None of these worked. I even resorted to compiling an x64 version of avrdude to see if that would help. Finally I stumbled across a Windows port of the libusb driver used by avrdude to communicate with USB programmers.

How to install it Troubleshooting. AVR-USBasp User Manual. USBASP.