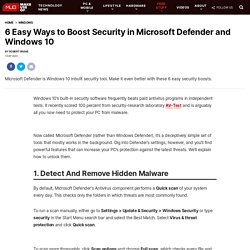 It recently scored 100 percent from security-research laboratory AV-Test and is arguably all you now need to protect your PC from malware. Now called Microsoft Defender (rather than Windows Defender), it’s a deceptively simple set of tools that mostly works in the background. AdwCleaner - Free Adware Cleaner & Removal Tool.

5 Ways to Check Who Is Tracking You Online. How much do you love online content? So much you pay for everything you can? Or do you, like the overwhelming majority of internet users, accept advertising and tracking as a way of life? The 8 Best Chrome Privacy Extensions for Better Security. Google Chrome is the world’s most popular web browser. 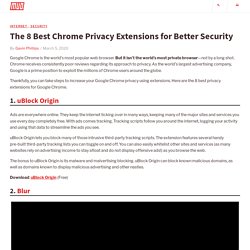 But it isn’t the world’s most private browser—not by a long shot. Chrome receives consistently poor reviews regarding its approach to privacy. As the world’s largest advertising company, Google is a prime position to exploit the millions of Chrome users around the globe. Advertisement. 4 Tools to Track What Others Do on Your Computer Behind Your Back. In this day and age, our computers also double as a treasure trove for private information. 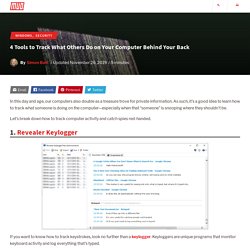 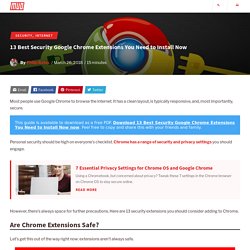 It has a clean layout, is typically responsive, and, most importantly, secure. However, there’s always space for further precautions. How to Check If Your Online Accounts Have Been Hacked. The protection of personal data and information is often the spotlight thanks to incidents like the Facebook and Cambridge Analytica scandal. 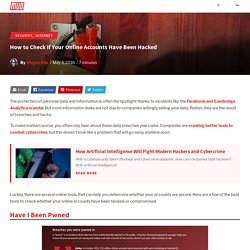 But most information leaks are not due to companies willingly selling your data. Rather, they are the result of breaches and hacks. The 7 Most Reliable Sites for Free Online Virus Scan and Removal. It is highly likely that you’ve had some sort of experience with a computer virus. 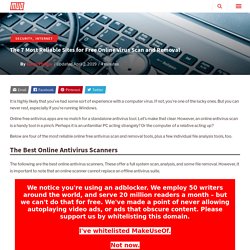 If not, you’re one of the lucky ones. But you can never rest, especially if you’re running Windows. Online free antivirus apps are no match for a standalone antivirus tool. Let’s make that clear. However, an online antivirus scan is a handy tool in a pinch. Below are four of the most reliable online free antivirus scan and removal tools, plus a few individual file analysis tools, too. The 3 Best Apps to Catch Snoops Who Try to Unlock Your Phone. Even if you have a screen lock on your phone, someone could still try to get into it. 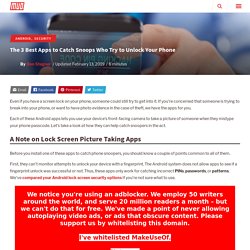 If you’re concerned that someone is trying to break into your phone, or want to have photo evidence in the case of theft, we have the apps for you. Each of these Android apps lets you use your device’s front-facing camera to take a picture of someone when they mistype your phone passcode. Let’s take a look at how they can help catch snoopers in the act. Before you install one of these apps to catch phone snoopers, you should know a couple of points common to all of them. First, they can’t monitor attempts to unlock your device with a fingerprint. Password vs. As an aside, Android only counts an unlock attempt as incorrect if the user enters four or more digits/characters/pattern dots. Send notes that will self-destruct after being read.

Avoid Google and Bing: 7 Alternative Search Engines That Value Privacy. Google and Bing might be the web’s most popular search engines, but they’re both a disaster from a privacy standpoint. 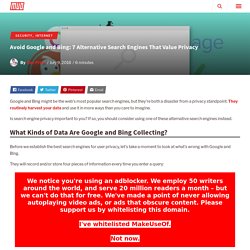 They routinely harvest your data and use it in more ways than you care to imagine. Is search engine privacy important to you? If so, you should consider using one of these alternative search engines instead. Before we establish the best search engines for user privacy, let’s take a moment to look at what’s wrong with Google and Bing. They will record and/or store four pieces of information every time you enter a query: IP address: It can reveal information about your location.A Cookie: Cookies let the search engine trace search queries back to your machine.Your search query: Lets the search engine show you targeted ads.Date and time of query: Gives the provider insight into what information you want and when you want it.

Privacy Tools - Encryption Against Global Mass Surveillance. 5 New Privacy Protecting Apps You Should Install Immediately. It is harder than ever to figure out which companies are collecting and selling your data. 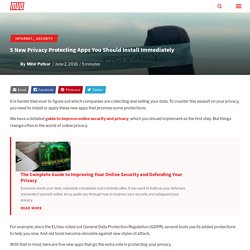 To counter this assault on your privacy, you need to install or apply these new apps that promise some protections. For example, since the EU has rolled out General Data Protection Regulation (GDPR), several tools use its added protections to help you now. And old tools become obsolete against new styles of attack. With that in mind, here are five new apps that go the extra mile in protecting your privacy.

Sucuri SiteCheck - Free Website Malware Scanner. What Are VPN Leaks? How to Test For and Prevent Them. Most virtual private networks (VPNs) can be relied upon to encrypt your data. 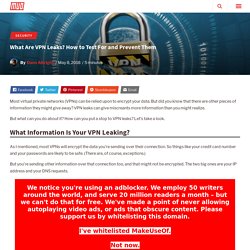 But did you know that there are other pieces of information they might give away? VPN leaks can give miscreants more information than you might realize. But what can you do about it? How can you put a stop to VPN leaks? Let’s take a look. Is Edward Snowden's Haven a Security App... or the Ultimate Spy Tool? In late 2017, Edward Snowden, The Guardian Project, and Freedom Of The Press announced the product of a collaborative effort: the Haven app.

It can transform any Android phone into the ultimate mobile security system. But is Haven as powerful as some claim it to be? Index [CryptoParty.] The Best Computer Security and Antivirus Tools. Malware is on the rise. And phishing attacks. How about ransomware, data theft, and data breaches? Yup — all on the rise. Not only are cybersecurity attacks and vulnerabilities on the rise, but their impact also costs more, takes longer to recover from, and can be extremely damaging. 10 Ways Your Router Isn't as Secure as You Think. Advertisement You’re happily browsing the web, visiting websites, doing a bit of online banking, and perhaps some gaming. Everything is perfect, with your computer secured with a firewall and antivirus software, and perhaps a VPN. No hacker is going to be ruining your day, right? Well, that all depends on how secure your router is. Here are 10 ways your router could be exploited by hackers and drive-by wireless hijackers.

Privacy Matters! 5 Apps That Keep Your Data Safe and Private. Advertisement If you are serious about protecting your privacy, you need to use the right apps to do it. You can’t rely on the Microsofts and Apples of the world. Punycoder - the Punycode converter (IDN converter) □ Who Has Your Back? Government Data Requests 2017. See earlier Who Has Your Back? Reports: 2011, 2012, 2013, 2014, 2015, 2016. Ransomware Protection - RansomFree by Cybereason. 5 Privacy Protecting Apps You Need to Use Right Now. On the internet, you can never be too safe. How to Password Protect a Folder in Windows. Data security and privacy are of increasing concerns for PC users.

We all should adopt good security practices to steer clear of those with malicious intent, but for certain important files and folders, the best form of defense might be putting the content under lock and key. Depending on how sensitive the material is, you can pursue a couple of different tiers of protection. How to Tell if Your Computer is Vulnerable to Hackers. 10 Great Security Tools You Should Be Using. You can never be too careful out there in the wild west that we like to call the Internet.

Chatting in Secret While We're All Being Watched. 5 Effective Tools to Encrypt Your Secret Files. I2P Anonymous Network. ‘NSA-Proof’ Email Service ‘ProtonMail’ by Harvard and MIT Students becomes massive success. Necessity is the mother of invention, the old adage has proved its worth again when a group of Harvard and MIT students came together to create an NSA-proof email service. ProtonMail, the new email platform launched at European Organization for Nuclear Research (CERN) by five security experts ‘who were drawn together by a shared vision of a more secure and private Internet,’ is probably safer and secure than Lavabit, Snowden’s defunct email service.