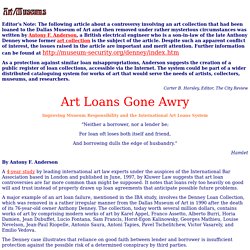 Anderson, a British electrical engineer who is a son-in-law of the late Anthony Denney whose former art collection is the subject of the article. Despite such an apparent conflict of interest, the issues raised in the article are important and merit attention. Further information can be found at As a protection against similar loan misappropriations, Anderson suggests the creation of a public register of loan collections, accessible via the Internet. The system could be part of a wider distributed cataloguing system for works of art that would serve the needs of artists, collectors, museums, and researchers. Emergency! If You're First. The following suggestions may help you respond to an emergency affecting cultural property. 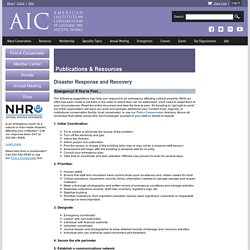 While an effort has been made to list them in the order in which they can be addressed, you'll need to adapt them to your circumstances. Read the entire document and take the time to plan. Reigning Men: Fashion in Menswear, 1715–2015. The Art of Dressing: Reigning Men. In December 2013, I embarked on a 28-month journey with 131 men. 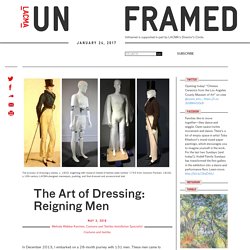 These men came to represent three centuries of men’s fashion, fully dressed and accessorized on mannequins presented in the exhibition Reigning Men: Fashion in Menswear, 1715–2015. The tremendous task of displaying men’s fashions in a historically accurate way offered many challenges. From the slightly protruding belly of the 18th century, to the body-conscious hourglass shape of the early 19th century, to both the skinny and the athletic bodies fashionable through the 20th and early 21st centuries, men’s fashionable silhouettes were shaped by history and our changing economies, class structure, and leisure activities.

Joan Miró masterpiece damaged by clumsy visitor to Tate. The accident, which emerged in figures from the Department for Culture, Media and Sport on indemnity for art works loaned to national museums obtained by The Art Newspaper, follows a string of incidents at Tate Modern where important art works have been damaged. 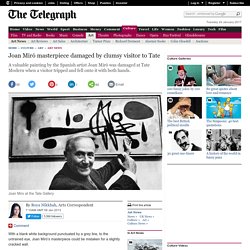 In October, a £9 million Mark Rothko painting, Black on Maroon, was defaced at the gallery when a man daubed his name and the words “12, a potential piece of yellowism” on the work. Wlodzimierz Umaniec, 26, of Worthing, West Sussex, was jailed for two years in December for damaging the painting which Rothko donated to the Tate in 1969. Grumpy Art Historian: Loan damage. Bendor Grosvenor has taken issue with Blake Gopnik's recent call for fewer exhibitions. 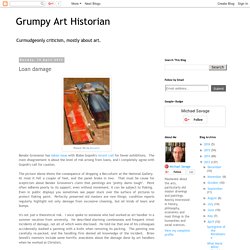 The main disagreement is about the level of risk arising from loans, and I completely agree with Gopnik's call for caution. The picture above shows the consequence of dropping a Beccafumi at the National Gallery. At most it fell a couple of feet, and the panel broke in two. That must be cause for scepticism about Bendor Grosvenor's claim that paintings are "pretty damn tough". Grounded: the great art treasures that no longer go out on the road. After a triumphant tour of Japan, then the United States and ending in Italy, the Girl with a Pearl Earring has returned home to the Mauritshuis royal picture gallery in The Hague. 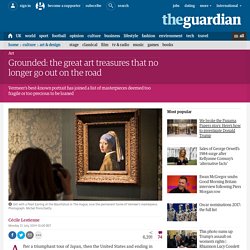 For ever. The museum, which reopened last month after two years' renovation work, will no longer allow Vermeer's masterpiece out. Officially the Mona Lisa of the North has been gated in order to please visitors to the Mauritshuis who only want to see that painting. Why museums need more art lending. Eli Broad hasn’t given up on his rallying cry, which I first wrote about two years ago: “If 90% of your work is in storage you need to begin lending it to other institutions. 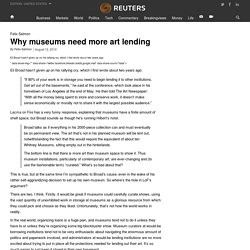 Get art out of the basements,” he said at the conference, which took place in his hometown of Los Angeles at the end of May. He then told The Art Newspaper: “With all the money being spent to store and conserve work, it doesn’t make sense economically or morally not to share it with the largest possible audience.” Lacma on Fire has a very funny response, explaining that museums have a finite amount of shelf space, but Broad sounds as though he’s running Hilbert’s hotel. Broad talks as if everything in his 2000-piece collection can and must eventually be on permanent view. What #isamuseum. Conservation Project: Costume Accessories. The Museum of Fine Arts, Boston, is improving the safety and accessibility of the Textile and Fashion Arts collection with the design and construction of custom storage mounts for costume accessories. 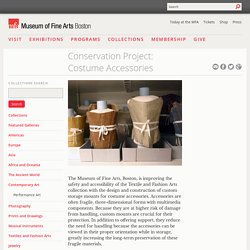 Accessories are often fragile, three-dimensional forms with multimedia components. Because they are at higher risk of damage from handling, custom mounts are crucial for their protection. In addition to offering support, they reduce the need for handling because the accessories can be viewed in their proper orientation while in storage, greatly increasing the long-term preservation of these fragile materials. Moving the Collections. During the course of the five-year Move Project, NMAI moved more than 800,000 Native American archaeological (607,089) and ethnographic (168,622) objects from the NMAI Research Branch, a crowded warehouse in the Bronx, New York, to the museum's Cultural Resources Center, a purpose-built research and storage facility in Suitland, Maryland. 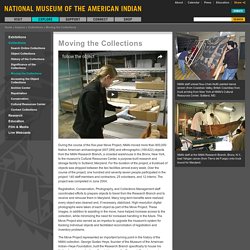 For the duration of the project, a truckload of objects was shipped between the two facilities almost every week. Over the course of the project, one hundred and seventy-seven people participated in the project: 140 staff members and contractors, 25 volunteers, and 12 interns. The project was completed in June 2004. Registration, Conservation, Photography, and Collections Management staff coordinated efforts to prepare objects to travel from the Research Branch and to receive and rehouse them in Maryland. Many long-term benefits were realized: every object was cleaned and, if necessary, stabilized. 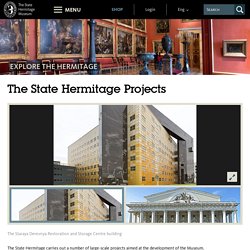 The Staraya Derevnya Restoration and Storage Centre was built in order to increase the Museum’s storage space and to update its equipment. Fitted out with up-to-date equipment, this museum complex was designed to accommodate the vast Hermitage collections and scientific restoration laboratories. The handover of the Stock Exchange Building to the State Hermitage will expand the Museum’s display space. Showcasing Archives, Museums Bring Out the Good Stuff.

Museum Lighting Research. Georgia O'Keeffe, Oriental Poppies, 1927, oil on canvas. Dale Kronkright, Conservator, Georgia O'Keeffe Museum (left) and Carl Dirk from UTEP (right) examine the painting at the O'Keeffe Museum, on loan to the museum from the Fredrick R. Weisman Art Museum at the University of Minnesota, Minneapolis. Research : Conservation. Research : Conservation. The Getty Museum is in a legal fight over Armenian Bible pages - latimes. The J. Paul Getty Trust failed Thursday to derail a lawsuit by the Armenian Orthodox Church that accuses the museum of harboring stolen illuminated medieval manuscripts — 755-year-old works that are masterpieces and, to the church, spiritually and historically sacred. After a brief hearing, Los Angeles Superior Court Judge Abraham Khan denied the Getty's motion to dismiss the claim. The museum's attorneys argued that the deadline for filing the suit had passed decades ago under the statute of limitations.

Exclusive: Feds Investigate Hobby Lobby Boss for Illicit Artifacts. One of America’s most famously Christian businesses is amassing a vast collection of Biblical antiquities. The problem is some of them may have been looted from the Middle East. In 2011, a shipment of somewhere between 200 to 300 small clay tablets on their way to Oklahoma City from Israel was seized by U.S. Scandal at the Getty has far-reaching implications for museums acquiring new works. When John Keats mused that a thing of beauty is a joy forever, he could hardly have envisioned the ugly drama that has splashed across the vast canvas of the international art world, like a bad drip pattern on a forged Jackson Pollock painting. Associated PressThe Metropolitan Museum of Art recently agreed to return the Euphronios Krater to Italy. The 2,500-year-old Greek vase had been part of the New York museum's collection since 1972.

Too many treasures - latimes. ONE of the best-known artworks at the Los Angeles County Museum of Art is Edward Kienholz's "Back Seat Dodge '38," an assemblage that includes two faceless figures made of chicken wire and engaged in a sexual encounter in the back of an actual vintage car. Although it's almost 40 years since the work first went on display, it still carries a certain titillation factor. In 1966, it sparked a controversy at the newly established museum and was declared pornographic by the county Board of Supervisors. But right now, the only place you can see "Back Seat Dodge" is via LACMA's website, www.lacma.org, where it's the subject of a virtual exhibition, complete with audio and video. It's not a matter of censorship; it's all about space. The artwork was placed in storage recently to make room for two special exhibitions on the second floor of the museum's Modern and Contemporary Art building.