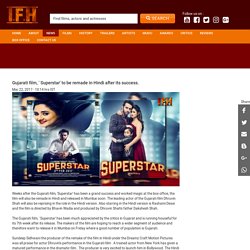 The leading actor of the Gujarati film Dhruvin Shah will also be reprising in the role in the Hindi version. Also starring in the Hindi version is Rashami Desai and the film is directed by Bhavin Wadia and produced by Dhruvin Shah's father Dakshesh Shah. The Gujarati film, ' Superstar' has been much appreciated by the critics in Gujarat and is running houseful for its 7th week after its release. Latest News. Theatre actress Kavitta Verma who made her debut entry in Bollywood in the song opposite Sanjay Dutt in the film, ' Policegiri' will be seen in the film Laali Ki Shaadi Mein Laaddoo Deewana. 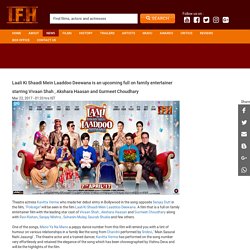 A film that is a full on family entertainer film with the leading star cast of Vivaan Shah , Akshara Haasan and Gurmeet Choudhary along with Ravi Kishan, Sanjay Mishra , Suhasini Mulay, Saurab Shukla and few others. One of the songs, Mano Ya Na Mano a peppy dance number from this film will remind you with a tint of humour on various relationships in a family like the song from Chandni performed by Sridevi, ' Main Sasural Nahi Jaaungi' . The theatre actor and a trained dancer, Kavitta Verma has performed on the song number very effortlessly and retained the elegance of the song which has been choreographed by Vishnu Deva and will be the highlights of the film. Latest News. Kangana Ranaut is preparing for her role as the Warrior Queen Rani Lakshmibai and the preparations were on since last two years with Ketan Mehta's Biopic film. 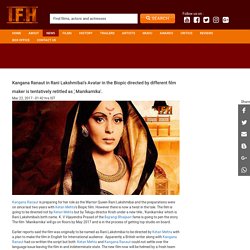 However there is now a twist in the tale. The film is going to be directed not by Ketan Mehta but by Telugu director Krish under a new title , 'Kanikarnika' which is Rani Lakshmibai's birth name. Latest News. Kareena Kapoor Khan and Sonam Kapoor's starrer ' Veere Di Wedding ' has gone through a couple of delays. 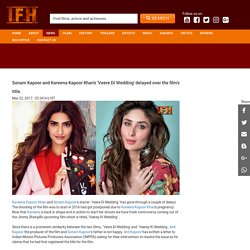 The shooting of the film was to start in 2016 had got postponed due to Kareena Kapoor Khan's pregnancy. Now that Kareena is back in shape and in action to start her shoots we have fresh controversy coming out of the Jimmy Sheirgill's upcoming film which is titled, 'Veerey Ki Wedding' . Since there is a prominent similarity between the two films, ' Veere Di Wedding' and ' Veerey Ki Wedding , Anil Kapoor the producer of the film and Sonam Kapoor's father is not happy. Anil Kapoor has written a letter to Indian Motion Pictures Producers Association (IMPPA) asking for their intervention to resolve the issue as he claims that he had first registered the title for the film .

Latest News. Superstar Akshay Kumar is busy with his upcoming venture, ' Padman ' in which he is seen playing a social entrepreneur from Coimbatore. 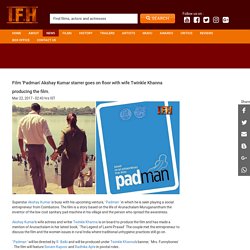 The film is a story based on the life of Arunachalam Muruganantham the inventor of the low cost sanitary pad machine in his village and the person who spread the awareness. Akshay Kumar's wife actress and writer Twinkle Khanna is on board to produce the film and has made a mention of Arunachalam in her latest book, ' The Legend of Laxmi Prasad' The couple met the entrepreneur to discuss the film and the women issues in rural India where traditional unhygienic practices still go on. ' Padman ' will be directed by R.