101 Free Hyper-V Downloads, Tools, Scripts and Resources. Top Support Solutions for IIS - Top Solutions from Microsoft Support. Demystifying MSDeploy skip rules. Skip rules are a feature of MSDeploy that allow specific parts of a synchronisation to be, you guessed it, skipped. 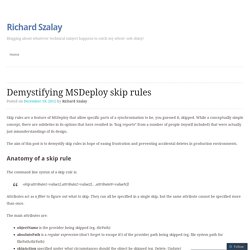 While a conceptually simple concept, there are subtleties in its options that have resulted in “bug reports” from a number of people (myself included) that were actually just misunderstandings of its design. The aim of this post is to demystify skip rules in hope of easing frustration and preventing accidental deletes in production environments. ASP.NET performance: what to keep in mind - Sysadmins of the North. Weekend Scripter: Use PowerShell to Update SSL Bindings - Hey, Scripting Guy! Blog. Summary: Microsoft IIS MVP, Terri Donahue, talks about using Windows PowerShell to update SSL bindings. 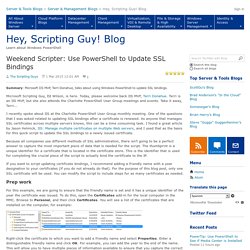 Microsoft Scripting Guy, Ed Wilson, is here. Optimizing static websites hosted on IIS. So you are building a website using static .html files instead of any server side technologies such as ASP.NET. 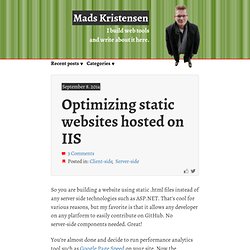 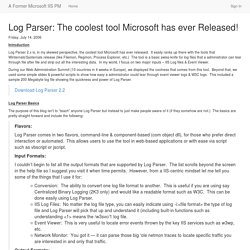 It easily ranks up there with the tools that Winternals\Systernals release (like Filemon, Regmon, Process Explorer, etc.) Blocking requests from specific IPs using IIS Rewrite module. Is there a way to access Microsoft.Web.Arr.HostNameRoundRobin programmatically. URL Rewrite – Protocol (http/https) in the Action - Scott Forsyth's Blog. IIS URL Rewrite supports server variables for pretty much every part of the URL and http header. 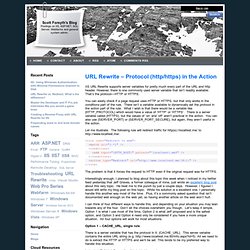 However, there is one commonly used server variable that isn’t readily available. That’s the protocol—HTTP or HTTPS. You can easily check if a page request uses HTTP or HTTPS, but that only works in the conditions part of the rule. IIS: Mehrere Zertifikate auf mehreren Web-Servern verwalten. Certificate Utility for Windows. Easily Sign Files and Batches of Code Formerly, signing your software with a code signing certificate was an arcane and time-consuming process. 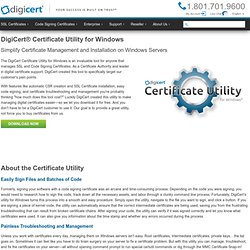 Depending on the code you were signing, you would need to research how to sign the code, track down all the necessary assets, and labor through a clunky command line process. Fortunately, DigiCert’s utility for Windows turns this process into a smooth and easy procedure. Ken Schaefer : New in IIS 7 - App Pool Isolation. Tuesday, January 29, 2008 8:47 PM by Ken In previous versions of IIS, it has sometimes been difficult to isolate web application pools from each other. 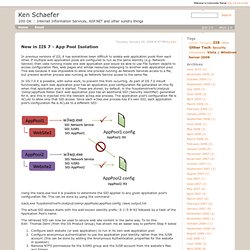 If multiple web application pools are configured to run as the same identity (e.g. Network Service) then code running inside one web application pool would be able to use File System objects to access configuration files, web pages and similar resources belonging to another web application pool. Importing Server Certificate with private key on IIS without creating CSR. Ok, here is a guide how to import a server certificate which comes with a key in a file. 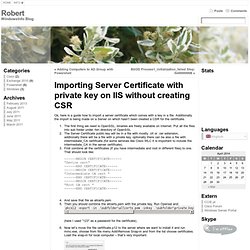 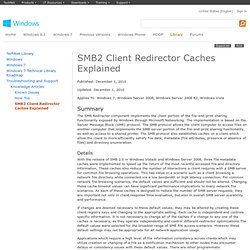 The implementation is based on the Server Message Block (SMB) protocol. The SMB protocol allows the client computer to access files on another computer that implements the SMB server portion of the file-and-print sharing functionality, as well as access to a shared printer. Details With the release of SMB 2.0 in Windows Vista® and Windows Server 2008, three file metadata caches were implemented to speed up the return of the most recently accessed file and directory information. If changes are deemed necessary to these default values, they may be altered by creating these client registry keys and changing to the appropriate setting. Recommendations. IIS7 .NET Web Site Delays Detection Of File Changes On UNC Path. Thanks for sharing your experience.DIGY -----Original Message-----From: Justin CrossmanSent: Saturday, December 11, 2010 1:29 AMTo: lucene-net-user@lucene.apache.orgSubject: Re: Lucene | IIS7 .NET Web Site Delays Detection Of File Changes OnUNC Path I finally found the solution to my issue: Setting DirectoryCacheLifetime [DWORD] to zero did the trick. 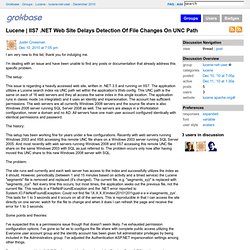 On Dec 10, 2010, at 11:04 AM, Justin Crossman wrote: I am very new to this list, thank you for indulging me. SSL off-loading in Application Request Routing : Won Yoo. One of the features that has not been called out explicitly in Application Request Routing (ARR) documentations is SSL off-loading. This is a feature in which the communications between the clients and the ARR server are done via SSL while the communications between the ARR server and the content servers are done via clear text.

In this scenario, SSL is terminated at the ARR server. This feature is designed to better utilize the resources on the content servers. The task of decrypting and encrypting SSL requests and responses is "off-loaded" to the ARR server and the cycles saved by not performing such task can be spent on process additional user requests. Exporting and Importing Sites and App Pools from IIS 7 and 7.5. IIS für Einsteiger Teil 2: Erste Schritte nach der Installation - Bernhard Frank's Blog.

Blogs. A question raised somewhat frequently from customers asks if there is a way to allow users to remotely recycle an application pool but without giving this user administration privileges on the IIS machine. Unfortunately, an application pool recycle does need to be run as an administrator, however by using msdeploy we can set the recycleApp provider to be delegated and run under elevated admin privileges. Then by using either a local standard user account or an IIS Manager account, we can call the recycleApp provider from a remote machine and with the elevated recycleApp provider, remotely recycle the app pools for which the user is granted permissions in IIS.