Telangana Govt. Allocates $100M Funds For India’s Largest Tech Incubator. Hyderabad will get India’s largest incubator center for tech startups called ‘T-Hub’, for which a budget of $100 million has been allocated by the Telangana Govt. 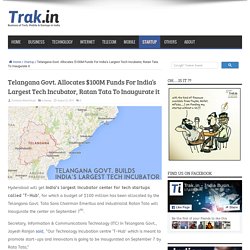 Tata Sons Chairman Emeritus and industrialist Ratan Tata will inaugurate the center on September 7th. Secretary, Information & Communications Technology (ITC) in Telangana Govt., Jayesh Ranjan said, “Our Technology Incubation centre ‘T-Hub’ which is meant to promote start-ups and innovators is going to be inaugurated on September 7 by Rata Tata,” Telangana Govt. has collaborated with major educational institutions in and around Hyderabad for making T-Hub one of such largest innovation hubs of the nation. Institutes like Indian School of Business (ISB), the International Institute of Information Technology (IIIT-Hyderabad) and NALSAR University of Law are already part of their collaborative program. Ranjan said on the issue of Tata Capitals minority stake: “The first round of discussions has happened over it. "Telangana Govt. Govt. Launches India Aspiration Fund & Make in India Loans for Indian Startups, SMEs.

PM Modi thundered “Start-up India, Stand up India” during his Independence Day speech in Delhi, in order to inspire more Indians into entrepreneurship. 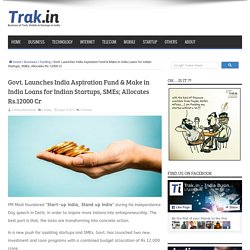 The best part is that, the talks are transforming into concrete action. In a new push for assisting startups and SMEs, Govt. has launched two new investment and loan programs with a combined budget allocation of Rs 12,000 crore. Minister of State for Finance Jayant Sinha said while announcing these programs, “India is expected to surpass the UK in terms of number of startups launched and would be behind only to the US. RBI Earmarks Rs. 2000cr to Fund Indian Startups In 2015. In an effort to bring back all the desi entrepreneurs from overseas and curb startups from move from Indian shores , the government has directed RBI to set aside Rs. 2000 crore for startups for Financial year 2014-15. 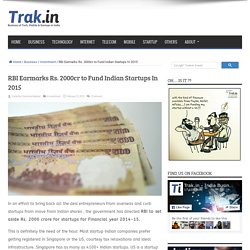 This is definitely the need of the hour. Most startup Indian companies prefer getting registered in Singapore or the US, courtesy tax relaxations and ideal infrastructure. Infosys Sets Aside Rs 750 Cr Funds For Startups From India, Israel & USA. In January this year, we had reported that Infosys has boosted their start-up funds to $500 million or Rs 3000 crore, which was earlier $100 million (Rs 600 crore). 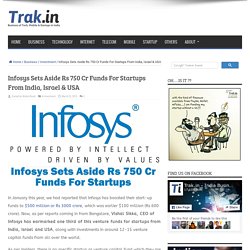 Now, as per reports coming in from Bangalore, Vishal Sikka, CEO of Infosys has earmarked one third of this venture funds for startups from India, Israel and USA, along with investments in around 12-15 venture capital funds from all over the world. As per insiders, there is no specific startup or venture capital fund which they are targeting, but they are simply looking for some ideas which are disruptive and unique.

A person from Infosys on condition of anonymity said, “The idea is not just to be a passive financial investor but take disruptive solutions to customers.” Target To Tap Indian Startup Ideas; Launches India Accelerator Program. Such is the intensity of Indian startup scene right now, that no one wants to be left behind. 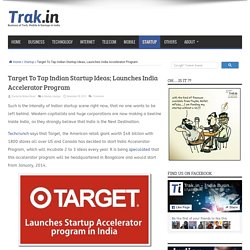 Western capitalists and huge corporations are now making a beeline inside India, as they strongly believe that India is the Next Destination. Techcrunch says that Target, the American retail giant worth $48 billion with 1800 stores all over US and Canada has decided to start India Accelerator Program, which will incubate 2 to 3 ideas every year. It is being speculated that this accelerator program will be headquartered in Bangalore and would start from January, 2014. Code named as Target Accelerator Program, it will be a fully corporate style incubator, which would be flushed with funds.

The report says that accepted start-ups can get upto $30,000 as funding with “possible equity shares” as well. Beth Jacob, Target’s global CIO has confirmed this news via email. Which Sectors Would Be The Priority? Big DataContent AggregationMobilitySearch. Alibaba To Launch Mobile Startup Incubator In India To Tap Fresh Ideas. It seems that Alibaba’s investment in PayTm earlier this year is not the end of story. 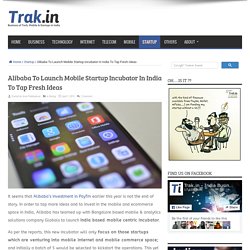 In order to tap more ideas and to invest in the mobile and ecommerce space in India, Alibaba has teamed up with Bangalore based mobile & analytics solutions company Globals to launch India based mobile centric incubator. As per the reports, this new incubator will only focus on those startups which are venturing into mobile internet and mobile commerce space; and initially a batch of 5 would be selected to kickstart the operations.

This yet unnamed incubator is expected to start from May-June. Interestingly, as per Gopinath, who is the founder of Globals, this idea of a special incubator only for mobile based startups came from Guru Gowrappan who is the COO at Quixey, a search engine for mobile apps. Based in the US, Alibaba is a major stakeholder in Quixey. Microsoft Launches Academia Accelerator For College Students. India has great brains and some very good colleges. 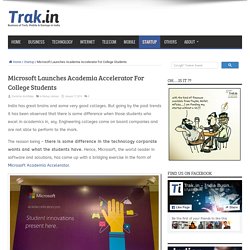 But going by the past trends it has been observed that there is some difference when those students who excel in academics in, say, Engineering colleges come on board companies and are not able to perform to the mark. The reason being – there is some difference in the technology corporate wants and what the students have. Hence, Microsoft, the world leader in software and solutions, has come up with a bridging exercise in the form of Microsoft Academia Accelerator. The program is aimed at building a deep long-term association between industry and academia – in collaboration with the faculty at 10 leading Indian engineering colleges, it will aim to enhance the Computer Science curriculum in selective areas and foster even greater student-driven innovation and entrepreneurship. What’s different? The program basically bridges the gap between what students learn and what corporate asks for.

How? What next? CSR or shrewd business sense? Related. Microsoft Launches Academia Accelerator For College Students. NASSCOM Paves Way For A Third Startup Warehouse In Chennai. In pleasant move, Tamil Nadu Government has consented to setting up of “exclusive entrepreneurial zone” for startups to flourish under NASSCOM’s guidance. 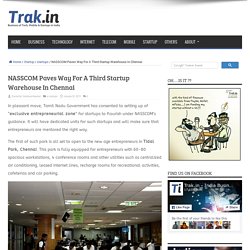 It will have dedicated units for such startups and will make sure that entrepreneurs are mentored the right way. The first of such park is all set to open to the new age entrepreneurs in Tidal Park, Chennai. This park is fully equipped for entrepreneurs with 60-80 spacious workstations, 4 conference rooms and other utilities such as centralized air conditioning, leased internet lines, recharge rooms for recreational activities, cafeterias and car parking. Microsoft Ventures Launches 2 New Programmes - Accelerator Plus & Scale Up. This is great news for upcoming startups in India – Microsoft Ventures, who already have been running their traditional accelerator program for past 2 years, have announced launch of Accelerator Plus and Scale UP programmes for startups in India. 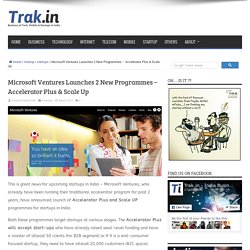 Both these programmes target startups at various stages. The Accelerator Plus will accept start-ups who have already raised seed-level funding and have a roaster of atleast 50 clients (for B2B segment) or if it is a end-consumer focused startup, they need to have atleast 20,000 customers (B2C space). On the other hand, to qualify for the Scale Up programme, the startup must have either received a “large seed-level funding” or have raised funds from a venture capital firm. NASSCOM Paves Way For A Third Startup Warehouse In Chennai. 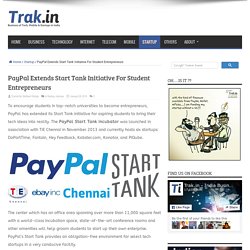 The PayPal Start Tank incubator was launched in association with TiE Chennai in November 2013 and currently hosts six startups: DoPartTime, Fantain, Hey Feedback, Kobster.com, Konotor, and PiQube. The center which has an office area spanning over more than 11,000 square feet with a world-class incubation space, state-of-the-art conference rooms and other amenities will help groom students to start up their own enterprise. PayPal’s Start Tank provides an obligation-free environment for select tech startups in a very conducive facility. In a recent Entrepreneurship Conclave and Startup Hive at IIT-Madras, PayPal selected two teams to start off with the Incubation Challenge. If selected after the finals, the teams will get incubated at Start Tank. Related. Global Management Consultancy Firm Hay India To Incubate 100 Startups in India; PWC Will Incubate 10 Startups for Free.

Startups have triggered the new age gold rush in India. Global management consultancy firms are now eyeing early stage Indian startups, and creating incubation programs to tap ‘em young and hoping to make a fortune the way Indian ecommerce poster boys Flipkart, PayTm and Snapdeal have done for their early stage promoters. Hay India, which is the Indian arm of global management consultancy firm Hay Group having 4000 employees, will incubate 100 Indian startups; and as of now, they have mentioned they will not pick any stake or charge any fees. Treating them as their clients, Hay India will assist these startups in formulating their business model, creating blueprints for growth and ensuring that all their business needs are met. They won’t even charge fees for their services. Citi Launches Virtual Accelerator Program For Mobile Startups In India: The Citi Mobile Challenge.

Citi has launched their virtual accelerator program in India: The Citi Mobile Challenge; which aims to nurture mobile startups in the niche of banking, payments and e-commerce ecosystem. This unique mentorship program will last for 8-10 weeks, and has combined hackathon with an incubation program. Citi India country business manager Kartik Kaushik said in a statement, “The Citi Mobile Challenge is aimed at harnessing the talent and agility of the developer and startup community in India to create affordable, accessible and transparent solutions for consumers,” Bengaluru will host the finale of the India leg of this challenge on November 3rd and finalists will compete for a cash prize of $100,000.