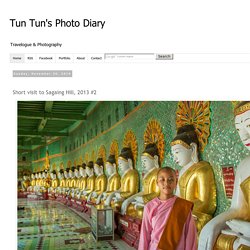 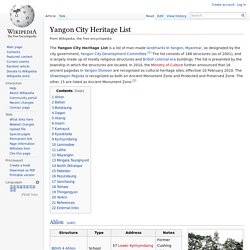 The list is presented by the township in which the structures are located. In 2010, the Ministry of Culture further announced that 16 ancient pagodas in Yangon Division are recognized as cultural heritage sites, effective 10 February 2010. The Shwedagon Pagoda is recognized as both an Ancient Monument Zone and Protected and Preserved Zone. The other 15 are listed as Ancient Monument Zone.[2] Ahlon[edit] Bahan[edit] Botataung[edit] Dagon[edit] Myanmar bike tours and cycling holidays. Walkopedia - the world's best walks, treks and hikes: Himalayan Far North, Myanmar. Myanmar's far north feels as far from the sweltering plains of the heartlands as is imaginable. 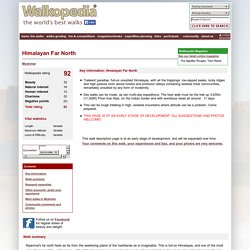 This is full-on Himalayas, and one of the most unspoilt areas of the entire range, with all the trappings: ice-capped peaks, rocky ridges and high pasture loom above forests and profound valleys containing isolated tribal communities, remarkably culturally unsullied by any form of modernity. The fact that this is largely due to the country's horrendous regime and consequent isolation and lack of 'development' is one big irony. Few visitors get here: even better - although this is because expensive permits (and air access only) are (as of 2012) required to go there.

There is a huge ethnic diversity in the area. The Kachin are the biggest group, but others include Lisu and Rawang. Myanmar Travel Agent, Travel Expert Myanmar Tour Agent. Asia Travel Guides, Reviews, Diary, News. IF you’re thinking of a walking holiday Burma (Myanmar) is probably the last place in Asia on your list. 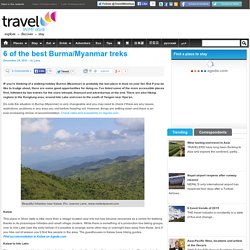 But if you do like to trudge about, there are some good opportunities for doing so. I’ve listed some of the more accessible places first, followed by two entries for the more intrepid, financed and adventurous at the end. There are also hiking regions in the Kengtung area, around Inle Lake and even to the south of Yangon near Hpa’an. Do note the situation in Burma (Myanmar) is very changeable and you may need to check if there are any issues, restrictions, problems in any area you visit before heading out. However, things are settling down and there is an ever-increasing choice of accommodation. Beautiful hillsides near Kalaw. Kalaw This place in Shan state is little more than a village located near Inle but has become renowned as a centre for trekking thanks to its picturesque hillsides and small village clusters. 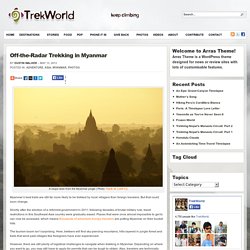 But that could soon change. Shortly after the election of a reformist government in 2011, following decades of brutal military rule, travel restrictions in this Southeast Asia country were gradually eased. Places that were once almost impossible to get to can now be accessed, which means thousands of adventure-hungry travelers are putting Myanmar on their bucket lists. The tourism boom isn’t surprising. Here, trekkers will find sky-piercing mountains, hills layered in jungle forest and trails that wind past villages few foreigners have ever experienced. Myanmar Eco Travels and Tours.

Trekking in the mountains of Myanmar {Burma} is a spellbinding experience for passionate trekkers. 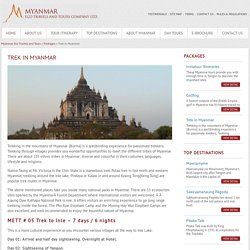 Trekking through villages provides you wonderful opportunities to meet the different tribes of Myanmar. Myanmar Trek with International Mountain Guides. Myanmar has recently become the spot for travelers seeking a glimpse of an old southeast Asian culture before the place gets too popular! 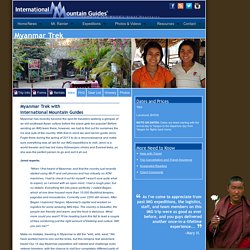 Before sending an IMG team there, however, we had to find out for ourselves the ins and outs of the country. With that in mind we sent senior guide Jenni Fogle there during the spring of 2013 to do a reconnaissance and make sure everything was all set for our IMG expeditions to visit. Walkopedia - Best walks, hikes and treks in Myanmar. Myanmar (Burma, until recently), is the westernmost country of Indochina, a large and mostly hot country. 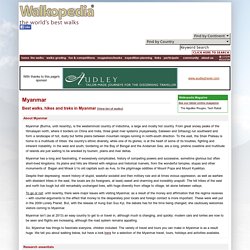 From great snowy peaks of the Himalayan north, where it borders on China and India, three great river systems (Ayeyarwady, Salween and Sittaung) run southward and form a landscape of hot, dusty but fertile plains between mountain ranges running in north-south direction. To the east, the Shan Plateau is home to a multitude of tribes: the country’s ethnic diversity, while one of its glories, is at the heart of some of its troubles, fighting and inherent instability.

In the west and south, bordering on the Bay of Bengal and the Andaman Sea, are a long, pristine coastline and multitude of islands are just waiting to be wrecked by tourism, plains and river deltas.