Summary, Characters, & Facts. Dracula, Gothic novel by Bram Stoker, published in 1897, that was the most popular literary work derived from vampire legends and became the basis for an entire genre of literature and film. 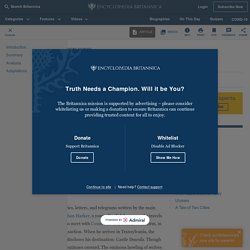 Britannica Quiz Famous Authors Who wrote Life on the Mississippi? Summary Dracula comprises journal entries, letters, and telegrams written by the main characters. Meanwhile, in England, Harker’s fiancée Mina is visiting a friend named Lucy Westenra, who has recently gotten engaged after declining a number of suitors. After her death, many report the appearance of a creature who is attacking children in the area.

Get exclusive access to content from our 1768 First Edition with your subscription. Now that Lucy has been taken care of, the group decides to track down Count Dracula and the 50 boxes of dirt he brought with him. Analysis A popular theory among critics is that the character Count Dracula is based on the infamously barbaric Vlad III, better known as Vlad the Impaler. Adaptations. Solace and Grief (The Rare, #1) by Foz Meadows. Vampire Knight Series by Matsuri Hino. The Originals (novel series) The Originals was a trilogy of books that chronicled the events of the The Original Vampire siblings - Klaus, Elijah, and Rebekah Mikaelson - in New Orleans around the 18th century. 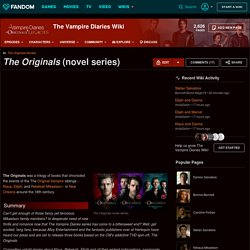 Summary Can’t get enough of those fancy yet ferocious Mikaelson family members? In desperate need of new thrills and romance now that The Vampire Diaries series has come to a bittersweet end? Well, get excited, fang fans, because Alloy Entertainment and the fantastic publishers over at Harlequin have heard our pleas and are set to release three books based on the CW’s addictive TVD spin-off, The Originals. Compelling untold stories about Klaus, Rebekah, Elijah and all their wicked indiscretions, passionate affairs and blood-filled adventures? The Originals: The Rise: Arriving in New Orleans in 1722, the Original vampire siblings hope they’ve escaped their dangerous past.

The Originals: The Resurrection: The Mikaelson siblings are determined to make New Orleans their own once and for all. References See Also. Welcome To Anne Rice.com! The Vampire Lestat, whom we first met in Interview With the Vampire , has his own story to tell. 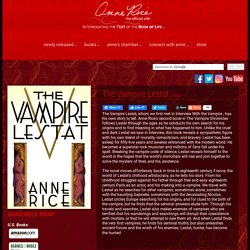 Anne Rice's second book in The Vampire Chronicles follows Lestat through the ages as he conducts his own search for his origins and to find meaning in what has happened to him. Unlike the cruel and dark Lestat we saw in Interview, this book reveals a sympathetic figure with his own blend of morality, romanticism, and bravery. Lestat has been asleep for fifty-five years and awakes entranced with the modern world. The Saga of Darren Shan. 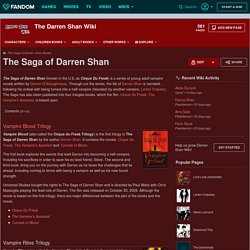 It contains the novels; Cirque Du Freak, The Vampire's Assistant and Tunnels of Blood. The first book explores the events that lead Darren into becoming a half-vampire, Including his sacrifices in order to save his ex-best friend, Steve. The second and third book, bring you on the journey with Darren as he faces the challenges that lie ahead, including coming to terms with being a vampire as well as his new found strength. Universal Studios bought the rights to The Saga of Darren Shan and is directed by Paul Weitz with Chris Massoglia playing the lead role of Darren. Peeps - Scott Westerfeld. “Both medical thriller and science fiction, this fast-paced, captivating modern vampire story is enriched with biology and history. . . 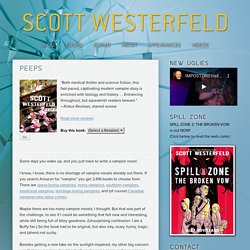 Entrancing throughout, but squeamish readers beware.” —Kirkus Reviews, starred review Read more reviews Buy this book: Some days you wake up, and you just have to write a vampire novel. I know, I know, there is no shortage of vampire novels already out there. Maybe there are too many vampire novels, I thought. The Lunar Chronicles. Cinder “. . . it unfolds with the magic of a fairy tale and the breakneck excitement of dystopian fiction.” 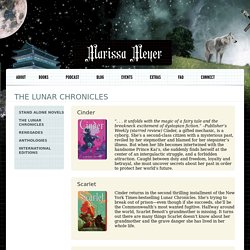 –Publisher’s Weekly (starred review) Cinder, a gifted mechanic, is a cyborg. She’s a second-class citizen with a mysterious past, reviled by her stepmother and blamed for her stepsister’s illness. But when her life becomes intertwined with the handsome Prince Kai’s, she suddenly finds herself at the center of an intergalactic struggle, and a forbidden attraction. Caught between duty and freedom, loyalty and betrayal, she must uncover secrets about her past in order to protect her world’s future. Scarlet Cinder returns in the second thrilling installment of the New York Times-bestselling Lunar Chronicles. Evermore by Alyson Noel. Beautiful Creatures. City of Bones – Shadowhunters. Richelle Mead - Vampire Academy Box Set 1-6 - Boxed Set. The Shiver Trilogy.