20 iPad Apps for Social Studies Classrooms. How are you leveraging the power of digital tools in the social studies classroom? 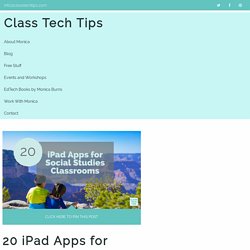 Bciuipad - home. 6 iPad Apps That Help You Create Interactive Study Guides. With the end of the semester drawing near, so are the plans of preparing students for final exams and standardized tests. Check out these six iPad apps to create fun, engaging, interactive study guides for your students. 1. ScreenChomp - Create a list of equations for students to solve. Student’s task will be to work out the equation and record the steps they took to solve the equation. 2. 3. 4. 5. Sunset Lake Software. Molecules is an application for the iPhone, iPod touch, and now iPad that allows you to view three-dimensional renderings of molecules and manipulate them using your fingers. 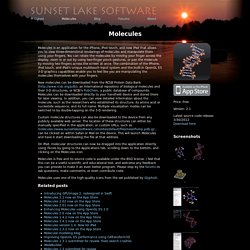 You can rotate the molecules by moving your finger across the display, zoom in or out by using two-finger pinch gestures, or pan the molecule by moving two fingers across the screen at once. The combination of the iPhone, iPod touch, and iPad's unique multitouch input system and the built-in OpenGL ES 3-D graphics capabilities enable you to feel like you are manipulating the molecules themselves with your fingers. New molecules can be downloaded from the RCSB Protein Data Bank ( an international repository of biological molecules and their 3-D structures, or NCBI's PubChem, a public database of compounds.

Molecules can be downloaded directly to your handheld device and stored there for later viewing. Custom molecule structures can also be downloaded to the device from any publicly available web server. Requirements. What Students Can Actually DO With An iPad. Online, in workshops, and even with friends, I frequently get asked What can the iPad actually do? As a sort of challenge to the worth of the device. I would rather that they ask, What can you actually do with an iPad? So last week, in preparing for the New England Reading Association Conference and the NYSCATE Mobile Learning Summit , I decided to change my approach. Rather than structure my presentations by tool, or by app, or even by project, I organized myself around desired student outcomes – aka. what students can actually do.

However, before addressing that question, I asked not only WHY iPads but WHY Technology ? I want my students to communicate in complex and modern ways. What does this tangibly look like in the classroom? I want my students to demonstrate their knowledge of the parts of a story. Learning Objectives: In addition to learning the story elements, students learn… The Knowledge Network. 10 Important Questions To Ask Before Using iPads in Class.

Digital Tools Teaching Strategies Lenny Gonzales By Terry Heick When it comes to deciding how or whether to use iPads, schools typically focus on budget issues, apps, networking logistics, check-in and check-out procedures, school and district tech-use policies, hardware precautions, and aspects of classroom management. 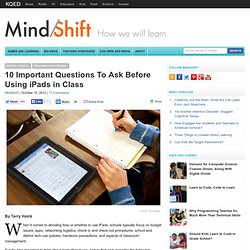 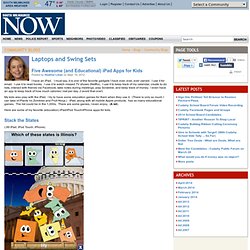 I must say, it is one of the favorite gadgets I have ever, ever, ever owned. How One Classroom Actually Used iPads To Go Paperless (Part 1: Research) Last year, with a fearless group of 10th graders in Katrina Kennett’s English class at Plymouth South High School , we attempted to transform the traditional research process to a completely paperless one using a fresh new cart of iPads. As I have written previously about iPads in the classroom, our decision to use iPads did not start with iPads, it started with learning goals and objectives.

We later determined that iPads would fit into the equation. The 4 Goals A few of the goals that we outlined prior to the research process included: - Students will crowd-source their research to a collective research group. - Students will incorporate varied media types into their research: web based text, traditional text, audio and video. - Students will work collaboratively with their teacher and classmates on their research and writing process. - Students will become proficient researching and writing in a digital environment. Going Paperless – The Process “ Definitely keep doing this! The Secret To Successfully Using iPads In Education. My brother recently built a shelf for my daughter’s room. It is in the likeness of a boat that she will one day spend sunny afternoons on, cruising around Plymouth harbor.

He used a saw, a hammer, glue and other assorted tools that I couldn’t explain or name. Back to School App-pack. The image above was created using PhotoshopTouch on an iPad and was then uploaded to Thinglink to create the hotspots. 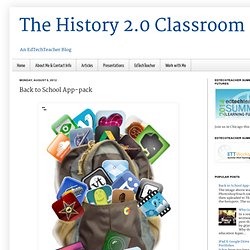 The summer is quickly winding down & a number of teachers will be returning to their classroom with new mobile devices (iPads). Throughout the summer I have been conducting workshops on iPad integration with EdTechTeacher and I thought it might be helpful to pull together a back to school list of apps structured around specific classroom goals. While many schools may already have an Apple VPP program already in place, I know a number of teachers will also be purchasing the apps themselves.

50 Must-Download Apps For Lifelong Learners. Added by Jeff Dunn on 2012-08-13 Long after degrees have been conferred and careers have been launched, many folks just can’t seem to quit school. For them, life provides an overstuffed cornucopia of educational opportunities that don’t necessarily require hefty loans and navigating different professorial strategies. Teachwithyouripad - home.

Related:  Teacher Tech Tools   -  21st Century Tools   -  60 Educational Apps in 60 Minutes by Clint Stephens on Prezi   -  I Education Apps Review - I Education Apps Review   -  iPad Academy - Learn How to Use the iPad   -  6 iPad Apps That Help You Create Interactive Study Guides   -  What Students Can Actually DO With An iPad   -  The Knowledge Network   -  10 Important Questions To Ask Before Using iPads in Class   -  Bile Learning   -  Back to School App-pack   -  50 Must-Download Apps For Lifelong Learners   -  Teachwithyouripad - home   -  Education   -  Enterprise