Consent is everything. Talking about consent - Family Lives. Why is talking about consent important Our TeenBoundaries work with young people in schools shows that sometimes they misunderstand what consent means, how to read the signs and feel pressured into sexual activities that they are uncomfortable with. 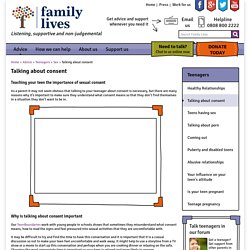 It may be difficult to try and find the time to have this conversation and it is important that it is a casual discussion so not to make your teen feel uncomfortable and walk away. It might help to use a storyline from a TV show or a movie to start up this conversation and perhaps when you are cooking dinner or relaxing on the sofa. Choosing the most appropriate time is important so your teen is relaxed and more likely to engage. Teens need to understand that both people in a sexual encounter or relationship must agree to it and can change their mind at any time if they want to stop – sometimes young people think that if they’ve said yes to one thing, they have agreed to do whatever their partner wants at any time when this is not the case.

Healthy Sex Talk: Teaching Kids Consent, Ages 1-21. A list of parenting action items, created in the hope that we can raise a generation of children who have less rape and sexual assault in their lives. 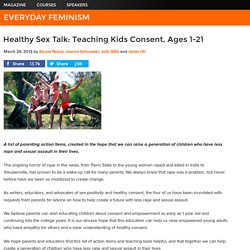 The ongoing horror of rape in the news, from Penn State to the young women raped and killed in India to Steubenville, has proven to be a wake-up call for many parents. We always knew that rape was a problem, but never before have we been so mobilized to create change. As writers, educators, and advocates of sex-positivity and healthy consent, the four of us have been inundated with requests from parents for advice on how to help create a future with less rape and sexual assault. We believe parents can start educating children about consent and empowerment as early as 1 year old and continuing into the college years.

It is our sincere hope that this education can help us raise empowered young adults who have empathy for others and a clear understanding of healthy consent. Sincerely, Julie Gills, Jamie Utt, Alyssa Royse and Joanna Schroeder 1. This is ABUSE. Sexting: Victoria makes it an offence to send explicit images without consent. Victoria is to become the first state to modify its laws on “sexting”, making it an offence to distribute explicit images without consent but also exempting young people from child pornography offences. 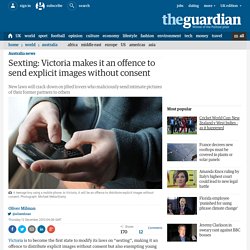 The Victorian government said it has accepted 11 of 14 recommendations from a parliamentary inquiry into sexting, a practice that involves the distribution of explicit images via mobile phones. There will be a new law to create an offence for “non-consensual sexting”, which most commonly occurs when jilted lovers maliciously send intimate pictures of their former partners to others. Coalition MP Clem Newton-Brown, chair of the parliament’s law reform committee, said that the unauthorised sending of explicit pictures can have "very dire consequences for victims who are embarrassed and humiliated". However, the government said it would ensure that children who distribute images are not charged with child pornography offences. Nude photos: 7 laws protect you - but they're not enough. How much does UK law protect your naked selfies? 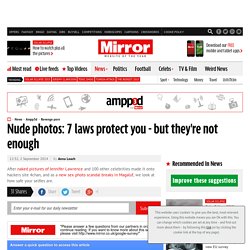 Err, not very much. And that's a problem because over half of us have sexy or nude pictures floating around the web. Some 54% of internet users had sent a sexy picture online, according to research by security firm McAfee in 2014. So what laws protect your nude pictures in the UK? These ones: 1. Any action that involves illicit access to someone else's computer is illegal according to The Computer Misuse Act 1990. 2. Using naked pictures to pressure people for money or anything else is illegal in the UK – under the 1968 Theft Law. 3. Angry comments or even threats? 4. Taking pictures of someone without consent when they’re in private premises contravenes privacy laws that apply to photographers – and anyone with a camera. If the pictures are also sexual in nature or used for sexual gratification, the voyeurism law in the Sexual Offences Act 2003 also kicks in. 5. The problem? It's not just a women's issue. Thames Valley Police - Consent Is Everything. 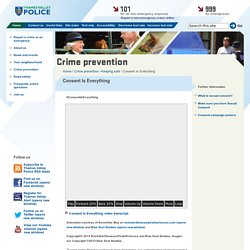