Cheat Sheet. Create a Custom Code Snippet In Visual Studio 2015. In this article, we will look into steps to be followed for creating and registering a custom code snippet for C# in VS 2015. 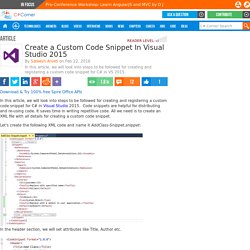 In this article, we will look into steps to be followed for creating and registering a custom code snippet for C# in Visual Studio 2015. Code snippets are helpful for distributing and re-using code. It saves time in writing repetitive code. All we need is to create an XML file with all details for creating a custom code snippet. Let's create the following XML code and name it AddClass-Snippet.snippet: In the header section, we will set attributes like Title, Author etc.

In Reference section, we can add reference to assemblies and namespaces to be included. In Declarations section, we can declare literals or objects that need to be replaced within snippet and the same can be referred in the snippet using $name$. Under Code section, we can mention Language and add code within CData as shown below: Here's the complete code: <? Responsinator. 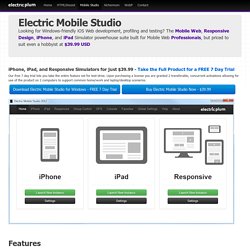 Simply re-download and install the latest trial version. This update is FREE for all owners/purchasers of the full version. iPhone, iPad, and Responsive Simulators for just $39.99 - Take the Full Product for a FREE 7 Day Trial Our free 7 day trial lets you take the entire feature set for test-drive. Upon purchasing a license you are granted 2 transferable, concurrent activations allowing for use of the product on 2 computers to support common home/work and laptop/desktop scenarios. Download Electric Mobile Studio for Windows - FREE 7 Day Trial Buy Electric Mobile Studio Now - $39.99 Microsoft Visual Studio 2012,2013 and 2015 Integration Electric Mobile Studio automatically detects VS 2012-2015 and optionally allows for direct integration to the "Browse With...

" menu. Multi Instance iPhone and iPad Web Simulation for Windows with Group Control A Powerful Command Pallette is Just a Click Away. Web development - Visual Studio. Of the thousands of extensions for Visual Studio, here is a collection of some that adds a lot of value to web developers specifically. 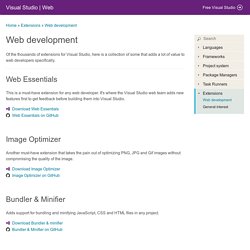 Web Essentials This is a must-have extension for any web developer. It's where the Visual Studio web team adds new features first to get feedback before building them into Visual Studio. Image Optimizer Another must-have extension that takes the pain out of optimizing PNG, JPG and Gif images without compromising the quality of the image. Bundler & Minifier Adds support for bundling and minifying JavaScript, CSS and HTML files in any project. Web Compiler The easiest and most powerful way to compile LESS, Scss and CoffeeScript files directly within Visual Studio or through MSBuild. A Complete List of Windows Development Tools @ Scott Ge. I collect tools for Windows Development. 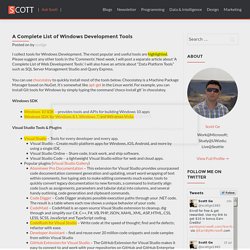 The most popular and useful tools are highlighted. Please suggest any other tools in the ‘Comments’. Next week, I will post a separate article about ‘A Complete List of Web Development Tools’. I will also have an article about “Data Platform Tools” such as SQL Server Management Studio and Query Express. You can use chocolatey to quickly install most of the tools below.

VS Refactoring Essentials (formerly) NR6Pack - Free analyzers and refactoring for Visual Studio 2015. Grunt, NPM and Bower in Visual Studio! It’s awesome.. right? The news that has come out of the Visual Studio team at VSConnect from the likes of Scott Guthrie (@scottgu), Scott Hanselman (@shanselman), Soma (@ssomasegar) and friends has been nothing short of blinding: Open-source .Net Framework? 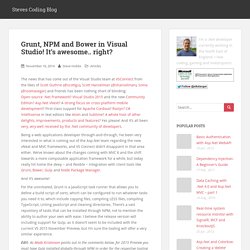 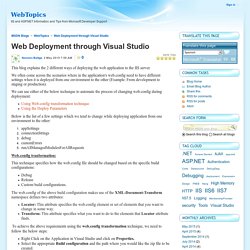 We often come across the scenarios where in the application's web.config need to have different settings when it is deployed from one environment to the other (Example: From development to staging or production). We can use either of the below technique to automate the process of changing web.config during deployment: Below is the list of a few settings which we tend to change while deploying application from one environment to the other: appSettings connectionStrings debug customErrors runAllManagedModulesForAllRequests Web.config tranformation: This technique specifies how the web.config file should be changed based on the specific build configurations: Debug Release Custom build configurations.

The web.config of the above build configuration makes use of the XML-Document-Transform namespace defines two attributes: Right Click on the Application in Visual Studio and click on Properties. Tags="" >