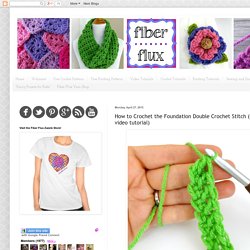 It eliminates the need for a starting chain...you work both chains and double crochet stitches as you go! Be sure to scroll down to see the full video tutorial too! Rue Royale Fine Art. LackRack - Eth0Wiki. Note to short URL fanatics: this page is available as The first implementation: Red LackRack with Ethernet switch and table lamp First occurrence on eth0:2010 Winterlan, the LackRack is the ultimate, low-cost, high shininess solution for your modular datacenter-in-the-living-room. 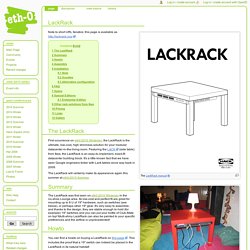 Featuring the LACK (side table) from Ikea, the LackRack is an easy-to-implement, exact-fit datacenter building block. It's a little known fact that we have seen Google engineers tinker with Lack tables since way back in 2009. The LackRack will certainly make its appearance again this summer at eth0:2010 Summer. When temporarily not in use, multiple LackRacks can be stacked in a space-efficient way without disassembly, unlike competing 19" server racks. The LackRack was first seen on eth0:2010 Winterlan in the no-shoe Lounge area. The Only Pantone Color Named After A Movie Character Is Named After A Character From Which Movie? Answer: Despicable Me Pantone Inc., a U.S. 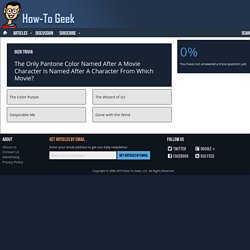 -based company best known for their Pantone Matching System color space used in the print and manufacturing industries, has always actively promoted the use of color and by various promotional tools such as announcing “Color of the Year” but until recently they had never formed a tie-in with a movie. In early 2015, Pantone released a new color, their first new color in three years, called “Minion Yellow” named after the Minions from the Despicable Me movie franchise. Laurie Pressman, Vice President of the Pantone Color Institute explains: “Color is contextual and right now there is a desire for colors that are more vibrant and uplifting. Color naming firsts and marketing tie-ins aside, we’ll have to agree with Miss Pressman; the yellow color of the Minions certainly is vibrant.

Image courtesy of Pantone. Free Old Typewriter Font. I know there are many typewriter fonts out there, but I had to give it a shot :) – I found this old letter, so I just scanned it and extracted whatever letters were available. 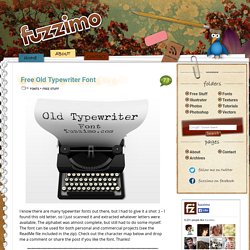 The alphabet was almost complete, but still had to do some myself. The font can be used for both personal and commercial projects (see the ReadMe file included in the zip). Check out the character map below and drop me a comment or share the post if you like the font. How to Build a Rain Barrel. HAIGH Australia PTY LTD. 21 Spicy Snacks If Sriracha Is Your Religion.

Plastic you can shape with your bare hands. Paper Toys: Flextangles. Today’s paper toy, Flextangles, is seriously the coolest paper puzzle we have ever made and judging by how many times you guys have downloaded our template you agree! 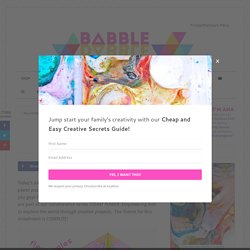 Flextangles are part of our collaborative series STEAM POWER: Empowering kids to explore the world through creative projects. The theme for this installment is COMPUTE! FLEXTANGLES: Make this paper toy and be mesmerized by the colorful action! Volume 90% Press shift question mark to access a list of keyboard shortcuts Keyboard Shortcuts Play/PauseSPACE Increase Volume↑ Decrease Volume↓ Seek Forward→ Seek Backward← Captions On/Offc Fullscreen/Exit Fullscreenf Mute/Unmutem Seek %0-9 Next Up Rainbow Rubber Eggs YT I’ve been itching to try making a flexagon ever since my friend Erica introduced me to them, so I decided it was high time we made one.

This post contains affiliate links to products I love and recommend to my readers. Materials. Creative Expressionismsismmms. How To Get Motivated When You're In a Funk ~ Creative Market Blog. The thing about being creative is that you will always get to that point where you feel that you’re running out of juice, like you have nothing else to squeeze. 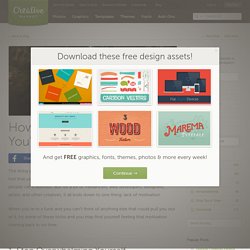 Some people call it burnout. But for a lot of freelancers, web developers, designers, artists, and other creatives, it all boils down to one thing: lack of motivation. When you’re in a funk and you can’t think of anything else that could pull you out of it, try some of these tricks and you may find yourself feeling that motivation coming back in no time. 1. Stop Overwhelming Yourself Overconfidence can also take its toll on your motivation level. Stop overwhelming yourself and keep things at a proper pace. 2. The 10 Most Valuable Skills To Put On Your Design Resume ~ Creative Market Blog. A designer's resume calls for creativity and impact above and beyond the typical business resume. 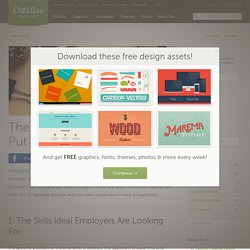 All designers are creative by nature, so presenting an average CV just won't do. To stand out from the pack, some key areas should be highlighted. Here are 10 valuable resume skills to make yours much more competitive: 1. The Skills Ideal Employers Are Looking For If a specific position or income level is desired, the applicant should find and analyze job postings in this area. 2. Employers love hiring competent, proactive people, so list your achievements prominently. 3.