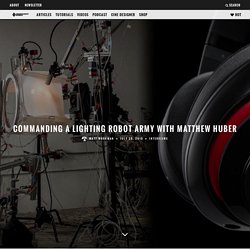 Photographer Matthew Huber has a different take on the future and as a talented engineer and robot overlord he has promised me that humans will remain in control and that we will still be shooting real objects! Matthew Huber’s motion controlled camera + product + lighting setup I came across Mr. Huber’s work on VIMEO and I was instantly fascinated by the 8 armed octopus-like machine that was controlling the camera, subject, AND lighting. It became clear to me that this type of system could give a live action photographer and cinematographer control over the camera and lighting that only CG artists posess.

CDB: Tell me about the evolution from product photography to motion control / stop motion? MH: I started off my creative career as a photographer in New York. Curves with XYZ Coordinate Points.wmv. SolidWorks - Lazy Tongs Kinematic Analysis 2. Topic: Importing from Excel; .csv questions. First off: thank you so much!!! 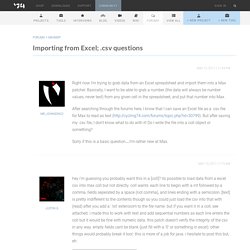 This will DEFINITELY help, and there is no chance that I ever would have thought this up. Secondly: this might complicate matters, but is there a way to do this without manually saving the Excel file…? The reason for this is that the Excel file will constantly be updated by means of a DDE server, so the values to be imported are always changing in real-time, and having to manually save the Excel as a .csv takes away that real-time aspect of it.

The data I’ll be using is being received by one program (MT4), and from there it’s sent to Excel in real-time, which is to be sent to Max also in real-time, if possible. Motion%20Simulation%20and%20Analysis%20 %20Final. Solidtec Solutions: Create evenly distributed sketch points along a curve in SolidWorks and export to excel. This blog shows you how to create evenly distributed sketch points along a sketched curve in SolidWorks, then export the x,y,z coordinates of those points into excel and additionally, import the x,y,z coordinate data back into SolidWorks as a 3d sketch. 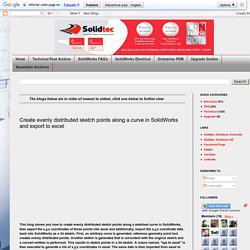 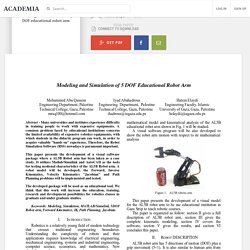 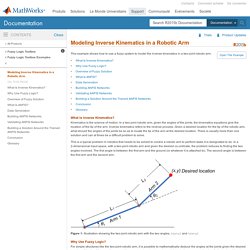 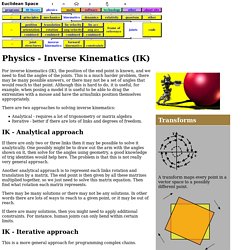 This is a much harder problem, there may be many possible answers, or there may not be a set of angles that would reach to that point. Although this is hard to do, it is useful, for example, when posing a model it is useful to be able to drag the extremities with a mouse and have the arms/links position themselves appropriately. L5 arm inverse kinematic equations - RobotShop Forum. Robotic Arm Inverse Kinematics on Arduino « Circuits@Home. Lynxmotion AL5D robotic arm I’m proud owner of Lynxmotion AL5D robotic arm. 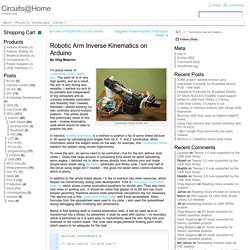 The parts kit is of very high quality, and as a result, the arm is very strong and versatile. I wanted my arm to be portable and independent of big computers and all currently available controllers lack flexibility that I needed, therefore I started building my own controller around Arduino platform. This article shows first preliminary result of this work – inverse kinematics code which would be used to position the arm.

In robotics, inverse kinematics is a method to position a tip of some linked stricture in 3D space by calculating joint angles from tip X, Y, and Z coordinates. To move the arm, six servos need to be controlled ( five for the arm without wrist rotate ). In addition to the article linked above, I’d like to mention two other resources, which helped me tremendously during code development. Inverse Kinematics for Hexapod and Quadruped Robots. In my hexapod robot, I don’t normally control the leg directly, I only control the position of the body. 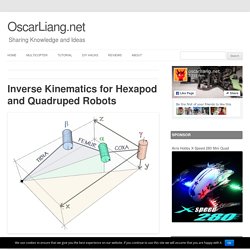 Changes to the position of the body should be translated into changes to leg position. By using Inverse Kinematics, we can work out the angles of each servos, and the robot moves the way we wish. Here are the Hexapod and Quadruped Robots that I have applied this IK implementation So in my implementation, there are two parts in the algorithm: One Curious Robot: Applying inverse kinematics to the robot. When it comes to programing the logic for your robot to move there are several paths you can take. 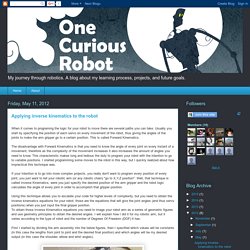 Usually you start by specifying the position of each servo on every movement of the robot, thus giving the angles of the joints to make the arm gripper go to a certain position. Simplified inverse kinematics model for a 5 degree of freedom + gripper robotic arm. A1, A2 and A3 are the three angles that we need to obtain. 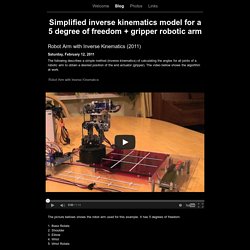 We can use the law of cosines to obtain angle A1-A12 as we have the length of the three triangle sides L1, L2 and. Implementation of Inverse Kinematics using Pseudo Inverse. OpenRAVE Documentation. IKFast: The Robot Kinematics Compiler IKFast analytically solves robot inverse kinematics equations and generates optimized C++ files. The inverse kinematics equations arise from attemping to place the robot end effector coordinate system in the world while maintaining joint and user-specified constraints.